Taxi drivers wait for passengers at a taxi station in Shah Alam during the conditional movement control order May 6, 2020. — Picture by Miera Zulyana
Follow us on Instagram, subscribe to our Telegram channel and browser alerts for the latest news you need to know.
By IDA LIM

KUALA LUMPUR, May 15 — Malaysians respondents in a new survey said they were even more apprehensive about their financial health for when the movement control order (MCO) ends than during the nationwide lockdown when most businesses had not been allowed to operate.

The findings were from the survey by research outfit The Centre from April 5 to April 10, which was the second phase of the MCO or during the third to fourth week of a nationwide shutdown.

The Centre said it analysed the responses of 720 respondents, who were part of a bigger pool of 1,084 Malaysians surveyed as the rest of the samples could not be used due to incomplete data on household income.

The 720 respondents were mainly residents in urban areas and mostly from the Klang Valley, with 59 per cent in urban areas, 70 per cent from Selangor and Kuala Lumpur, with 63 per cent of them female, 82 per cent of Malay/Bumiputera ethnicity and the largest age group being 24-34 at 42 per cent.

Here’s what their top worries are

The Centre asked its respondents to choose up to three major financial concerns at two points in time: when the survey was conducted during the MCO period and their “future financial worries after the MCO was lifted”.

“Consistent with their overall financial worries discussed above, respondents identified more financial concerns in the future after the MCO ended compared to during the MCO,” The Centre said in its findings released today. 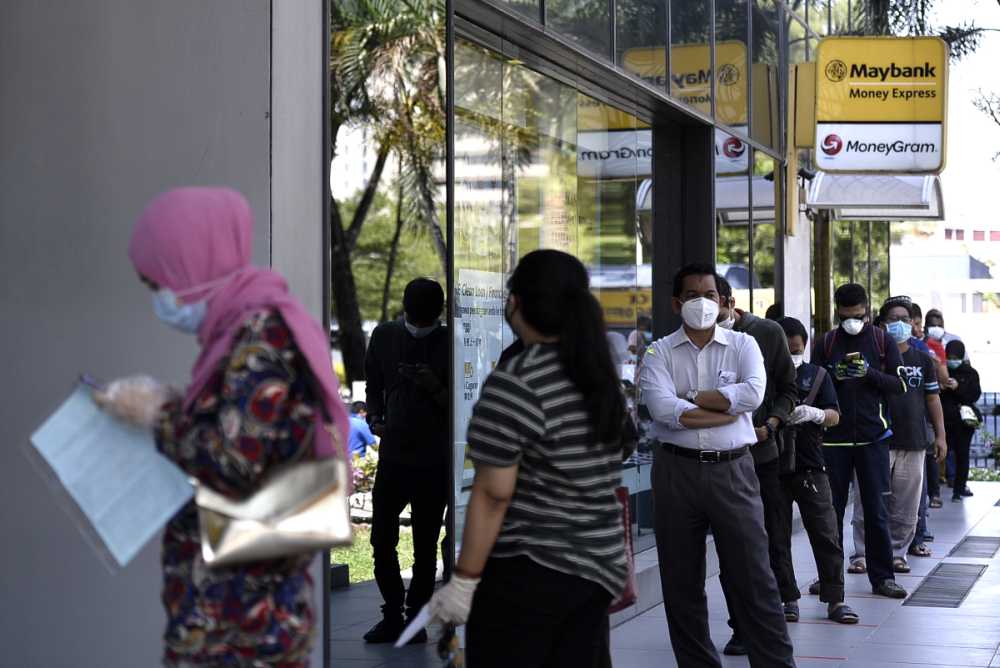 People are seen queuing up outside a Maybank branch in Shah Alam March 26, 2020. ― Picture by Miera Zulyana

“Consistent with the MCO being related to a public health crisis, more respondents were concerned about not being able to afford a medical emergency during the MCO compared to in the future,” The Centre said.

From the 720 respondents, 254 were worried about medical emergency costs during the MCO, but this figure fell to 227 when it came to their future worry about such costs after the MCO is lifted.

With the average respondent having three dependents, 183 said they were worried about not being able to financially support their dependents during the MCO, which grew to 210 when it came to the same concern for after the MCO.

The biggest jump was seen in respondents’ worries of not having enough money for retirement, with 140 selecting it as one of their three major concerns during MCO, while 175 identified it as among their top major concerns after the MCO is lifted.

Incomes fell for all categories polled

Customers browse through fabrics for their Hari Raya outfits at the Jakel Ipoh textile shop May 13, 2020. — Picture by Farhan Najib

In the same survey where many respondents appeared to show less optimism for their personal finances after MCO, it was also found that the average monthly household income for this pool of respondents went down from RM8,790 before MCO to RM7,773 during MCO, or a decrease of slightly more than RM1,000.

While acknowledging that these figures are higher than the national average for household income, The Centre noted that this was in line with most of the respondents being located in Selangor and Kuala Lumpur where the average household income is higher.

While household income levels for all categories of employment status dropped after MCO was imposed, the survey found salaried workers to be less affected.

“Part time employees, the self-employed and business owners saw their income reduced by over half. Part-time employees were the most affected, with their average pay reduced by 50 per cent, closely followed by business-owners who reported a 48 per cent reduction in income.

“Full-time employees were the most stable among all employment types, reporting a 3 per cent income reduction,” The Centre said.

The Malaysian government first implemented an MCO for a two-week period from March 18 to March 31, before extending it for another two-weeks from April 1 to April 14.

(The survey was from April 5 to April 10, which was just the earlier stages of MCO).

On April 10, the government announced a further two-week extension of the MCO until April 28. MCO was later extended to May 3, before entering a new phase called conditional MCO (CMCO) with most businesses allowed to open from May 4 to May 12, and now in a further extended one-month CMCO of May 13 to June 9.