Businessman Junaith Asharab Md Shariff is pictured at the Kuala Lumpur High Court February 19, 2020. — Picture by Shafwan Zaidon
Follow us on Instagram, subscribe to our Telegram channel and browser alerts for the latest news you need to know.
By IDA LIM

KUALA LUMPUR, Feb 19 — The prosecution today urged the court to declare its own witness as a hostile witness after the owner of Berani & Jujur Trading contradicted his initial court testimony during questioning from lawyers for the accused, Datuk Seri Ahmad Zahid Hamidi.

Junaith Asharab Md Shariff, who will be 48 later this year, today gave answers that were the complete opposite of what he previously told the Malaysian Anti-Corruption Commission (MACC) and in his earlier sworn testimony in court.

Junaith Asharab, who is a textile wholesaler via Berani & Jujur Trading, was the prosecution’s 36th witness in the corruption and bribery trial of former home minister Zahid.

In his written witness statement tendered in court, Junaith Asharab said he went with Zahid’s younger brother Datuk Seri Mohamad Nasaee to meet Zahid at his house in 2017 to hand over 10 cheques totalling RM5 million, which he said were donations for a mosque and a tahfiz school in Bagan Datuk.

According to his signed witness statement, Junaith Asharab said he had issued these 10 cheques that were all dated January 3, 2017 from Berani & Jujur’s RHB Islamic Bank account for the amount of RM500,000 each, but without stating the recipient’s name on the 10 cheques as he was unsure who to make it out to.

“I was the one who determined for each cheque’s amount to be RM500,000 to avoid being asked with various questions by the bank. Then I handed them over to Datuk Seri Ahmad Zahid Hamidi as witnessed by Datuk Seri Mohamad Nasaee,” he said, adding that Zahid then handed the cheques over to Mohamad Nasaee.

He verified today in court these 10 cheques which now carried the name of law firm Lewis & Co as the recipient.

Junaith Asharab’s further explanations regarding these 10 cheques then became a point of contention, including his claim in the 53rd paragraph that Zahid had told him during the 2017 incident that the cheques should be paid to Lewis & Co as the law firm was a “trustee to Datuk Seri Ahmad Zahid Hamidi”.

In his written statement, the parts that later became contentious also included Junaith Asharab alleging in the 55th paragraph that Zahid had promised to give him a foreign worker registration project worth around RM50 million to him after the 14th general elections and that such a promise was made after the cheques handover.

The other part that became contentious was the 56th paragraph in Junaith Asharab’s statement that he was asked by Zahid to submit a proposal on the purported promised “MyEG project” after the 14th general elections.

When asked by deputy public prosecutor Gan Peng Kun, Junaith Asharab said that the project he had hoped to obtain was regarding the obtaining of visas.

When cross-examined by Zahid’s lawyer Hamidi Mohd Noh, Junaith Asharab confirmed that his company Berani & Jujur Trading dealt with agricultural activities and had no capacity to carry out IT-related work and had never carried out work for MyEG.

Junaith Asharab went on to agree with Hamidi that the 10 cheques were issued for charity and as donation for mosque-building, further agreeing that these 10 cheques were not related to any MyEG project as he himself did not have IT expertise. 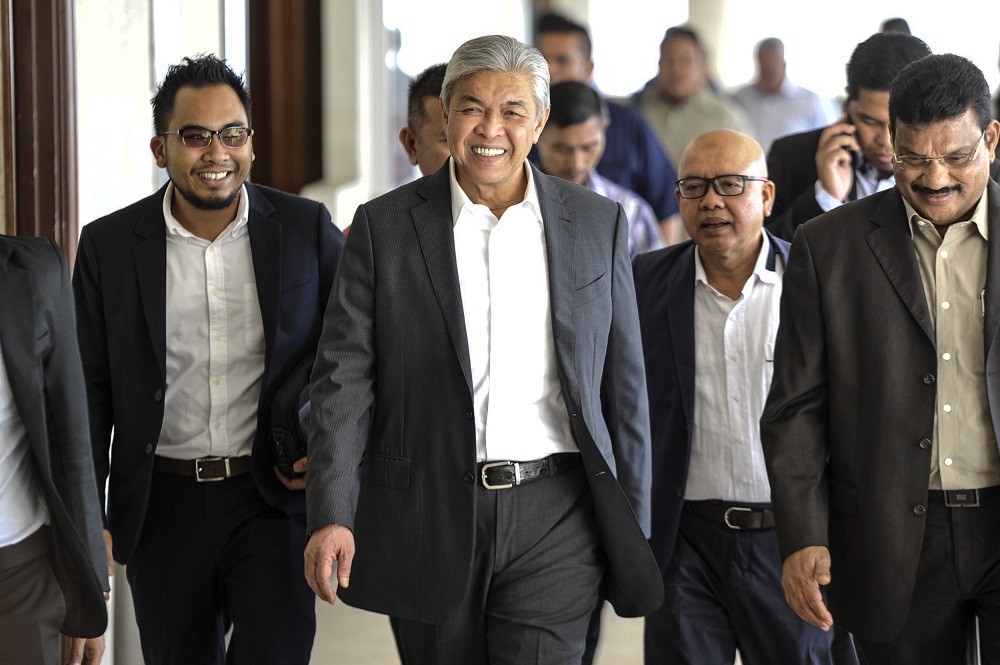 Hamidi then suggested that Zahid had never promised the MyEG project and that it was instead promised by Zahid’s brother, which Junaith Asharab agreed to.

Agreeing with Hamidi that paragraphs 55 to 57 in his witness statement were not correct, Junaith Asharab continued to agree when quizzed by another of Zahid’s lawyer Datuk Ahmad Zaidi Zainal.

Gan then informed the court that the prosecution wanted to initiate proceedings under Section 154 of the Evidence Act. to have its own witness Junaith Asharab declared as a “hostile witness”, and to be allowed to cross-examine him over the inconsistencies.

Gan read out three excerpts from the MACC’s recorded statement from Junaith Asharab during investigations on August 13, 2018, indicating that these three lines were completely identical to the businessman’s written statement in court (paragraphs 53, 55, 56). He pointed out that Junaith Asharab had however contradicted himself when quizzed by Zahid’s lawyers.

High Court judge Collin Lawrence Sequerah compared the MACC statement excerpt and the written witness statement in court, before concluding that there was a “material discrepancy” with what Junaith Asharab verbally said in court and then allowing the prosecution to treat him as a hostile witness with Zahid’s lawyers also allowed to cross-examine him.

Questioned by deputy public prosecutor Gan, Junaith Asharab agreed that he had known Mohamad Nasaee for 18 years and was close to him with their relationship akin to that of siblings, also agreeing that he had also gotten close to Zahid after being introduced to him by Mohamad Nasaee in 2015.

When asked if his close relationship with Zahid resulted in him wanting to help the former minister escape from his corruption charges, Junaith Asharab denied this and said he was not helping Zahid to be freed from the charges.

When Gan pointed out the discrepancies in his verbal testimony in court with what was recorded during MACC investigations, Junaith Asharab claimed that he may have been “confused” when quizzed by the MACC before finally saying that he did not know what to answer and later also suggesting that Zahid’s lawyers’ questions had confused him.

Questioned by deputy public prosecutor Lee Keng Fatt, Junaith Asharab confirmed that his highest qualification was SPM and that he was well-versed in both BM and English, further agreeing that he was a successful businessman who understood the statement recorded by the MACC which he had signed off on.

Junaith Asharab also confirmed that signing the witness statement that was tendered in court meant that his statement was truthful.

After the prosecution’s cross-examination, Zahid’s lawyer Zaidi then asked Junaith Asharab if Zahid had ever promised to give him a MyEG project, with the businessman then saying that Zahid had not made such a promise to him.

Junaith Asharab also told Zaidi that the first time he had found out Lewis & Co was Yayasan Akalbudi’s trustees was when he gave cheques to Mohamad Nasaee.

“I asked Datuk Seri Nasaee, these cheques pay to who? And Datuk Seri Nasaee explained to me that this payment is to Lewis & Co and they are trustees to us. So when he said us, so I thought Zahid Hamidi, at that time I don’t know Akalbudi, Yayasan, I don’t know,” he also said when explaining his initial testimony of the law firm being Zahid’s trustee.

Junaith Asharab today also confirmed August 13, 2018 was the first time he was called in by MACC for investigations, adding that he had felt pressured as there were allegedly no recording of statement from when he presented himself at 10am to around 4pm on that day.

According to the MACC recorded statement, the recording of his statement started from 4.30pm to 10pm on the same day, with Junaith Asharab saying that there were several breaks while the statement was recorded.

When asked by Zaidi if he was threatened, Junaith Asharab said he was not roughed up or beaten, but alleged that MACC officers had threatened him by purportedly saying he would be charged.

He agreed with Zaidi that he would have signed anything in order to leave the MACC office after being kept there for 12 hours and under the alleged threats, further claiming to be under pressure when previously saying that Zahid had promised to give a MyEG project.