KUALA LUMPUR, Dec 15 ― Since early this month, Singaporean ministers have made fiery claims that Malaysia “encroached” on their country’s territorial waters by extending the Johor Baru port limits and of Malaysian vessels “intruding” into the same.

Accusing Malaysia of provocation and challenging Singapore’s sovereignty, the remarks have stirred nationalistic sentiments among their citizens and are testing the bilateral ties between the two neighbours.

Were the remarks merely rhetoric? Malay Mail examines the claims.

Despite Singapore’s assertions, there is no formal or official demarcation of borders in the maritime area being disputed by Singapore.

Malay Mail understands that attempts at negotiations between the two countries over the last two decades were not entertained by Singapore.

The only official maritime border between Malaysia and Singapore ends just slightly southwest of the original Tuas area, which was finalised in 1995 and based on the Straits Settlements and Johore Territorial Waters Agreement 1927.

Beyond that, Malaysia has defined its own territorial waters and continental shelf in a map it published in 1979. However, Singapore has never acknowledged this boundary.

Shahriman Lockman, a senior analyst with the Institute of Strategic and International Studies Malaysia think tank, said all countries are obliged to delimit their maritime boundaries based on the United Nations Convention on the Law of the Sea (Unclos).

“Singapore has not declared a maritime boundary in that area even though Malaysia has done so since it announced its territorial-sea and continental-shelf boundaries in 1979,” Shahriman told Malay Mail. 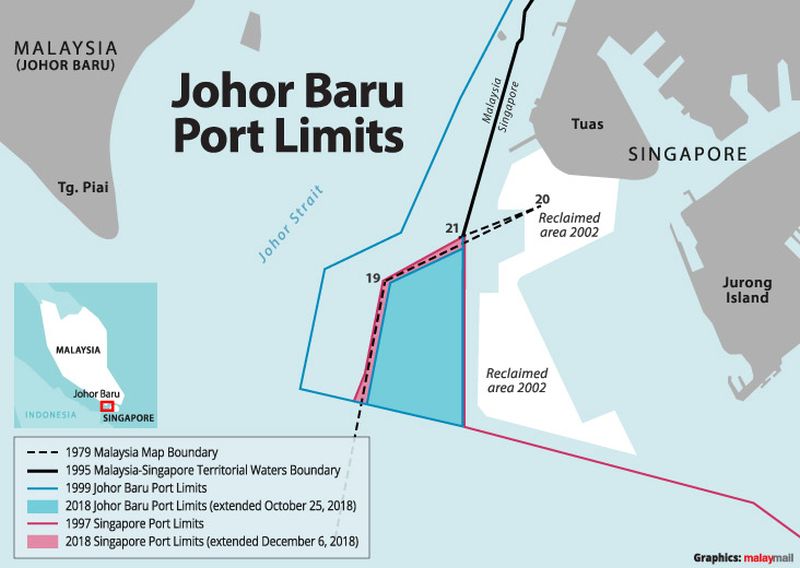 The Johor Baru Port limits initially published in 1987, and subsequently amended in 1999, has consistently followed the 1979 line.

Despite Malaysia treating the 1979 line as the “status quo” for the maritime border, the converse was not true for Singapore, which has breached the 1979 line that it does not recognise as legitimate.

The land reclamation at Tuas that started in 2002 was one such case, as it directly overlaps the “Point 20 sliver” on the 1979 line.

Why the new port limits are within Malaysian waters

On October 25, the Attorney-General’s Chambers had in the Federal Government Gazette announced the expansion of the Johor Baru Port limits.

In response, the Maritime and Port Authority of Singapore issued on November 30 a circular instructing ships to ignore the gazette.

Transport Minister Anthony Loke explained on December 5 that the expansion was well within Malaysia’s rights as it is part of the country’s territorial waters.

He added that Singapore’s territorial seas remain the same, even though it had reclaimed land for Tuas.

“Malaysia has always had and continues to have sovereignty over the waters within the port limits for Johor Baru Port,” Loke said in a statement, adding that drawing the new port limits is in accordance with Malaysian national laws.

“We can measure to see if it is true or not but we had not touched their border. We are still within our own waters,” Dr Mahathir told reporters.

Shahriman argued that the port limit extension cannot be construed as encroachment, especially as Singapore has not agreed to such a boundary.

“Without an agreed maritime boundary in the area, it is disingenuous for Singapore to claim that the extended Johor Baru port limits encroaches into their territorial sea,” he said.

In retaliation, Singapore has since also expanded its Singapore port limits westward on December 6. Its new limits now extend eastward over the “status quo” 1979 line.

On December 7, Malaysia’s Foreign Affairs Ministry proposed a “cease and desist” for both countries in the deployment of assets to the disputed area. Singapore rejected this also.

Despite that, Wisma Putra has pledged to keep pressing for de-escalation. The only Malaysian vessels in the new port limits is a Malaysian Marine Department ship anchored to provide navigation safety, and a patrolling Malaysian Maritime Enforcement Agency.

Singapore has since filed a declaration under Article 298(1)(a) of Unclos on December 13 to prevent any party, including itself, to unilaterally commence third party arbitration or adjudication.

The two countries are now expected to hold bilateral talks next month to discuss the border dispute, which Shahriman said should provide more clarity.

“How do we know where your territorial sea is when you haven't said where it ends? Good fences make good neighbours, so both sides urgently need to determine their common maritime boundary in that area,” he added. 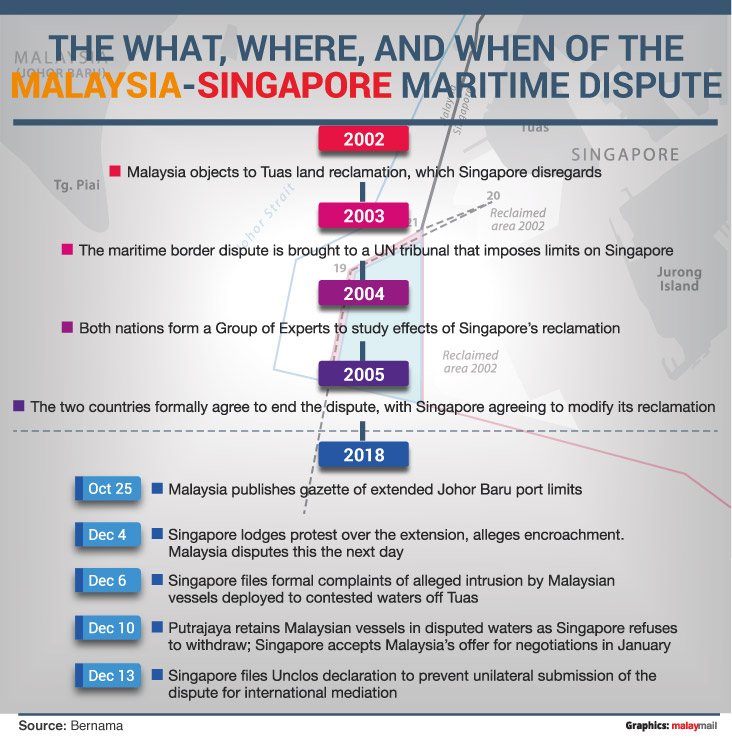