Responding to the four cases of roadkill involving endangered species like the Malayan tapirs and sun bears last month, Wan Junaidi said a sanctuary dedicated to research and data-gathering for the interbreeding of endangered species should be established to mitigate roadkill.

He said state land that have been alienated should be turned into these sanctuaries to benefit the wildlife in the area.

“It is possible that sanctuaries are the answer, the government believes this is the opportunity for more research and data-gathering, in the meantime the government has to translocate the wildlife to save them from reckless drivers,” he told Malay Mail in an interview here.

“We are strengthening our collaboration with other ministries and implementing agencies particularly at the state level. In fact, NRE is serious in this matter by requesting for it to be consulted in view of any new development project that may affect wildlife habitat.”

He also suggested that the peninsular Malaysia’s Department of Wildlife and National Parks (Perhilitan) be invited to provide technical opinion before the construction of any highway.

“On top of that, the Road Transport Department should implement a module on ‘wildlife issues’ and safer driving to create awareness among drivers.

“Our drivers are known to be reckless and education is the key to ensure they are more aware of speeding dangers or not paying attention to road signs,” he said. 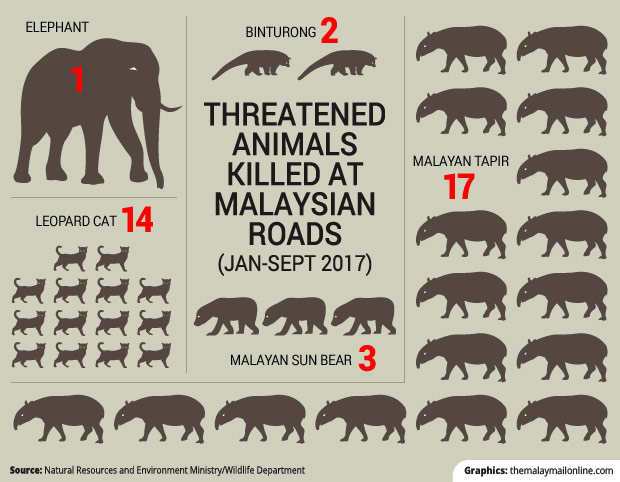 According to Perhilitan director-general Abdul Kadir Abu Hashim, the Lebuhraya Pantai Timur 2 has recorded one of the highest cases of roadkill.

“This is because although there has been effort to build fences, every fortnight or so the Malaysian Highway Authorities have to fix it because humans cut through it,” he said.

Wan Junaidi said the act was considered vandalism and should not be condoned any longer.

“People do it because it is easier for them to go into the estates, in the area but it causes animals to wander onto the roads and get killed,” he said.

“Time used to constantly fix the fence could be used to install other beneficial features on other highways.”

Statistics given by the Natural Resources and Environment Ministry and the Wildlife Department to Malay Mail recorded at least 39 roadkill deaths involving threatened species in Malaysia between January and September this year.

The report also indicated that there were 221 cases of roadkill in the same period, with the most cases happening in Pahang at 24 incidents, which was eight times more than runners-up Terengganu and Johor.