KUALA LUMPUR, April 6 — Malaysians who want to buy houses now consider safety and property size above price, although location remains the most important criterion, a survey has shown.

PropertyGuru Malaysia manager Sheldon Fernandez said the change in potential property buyers’ top considerations for this year was due to more Malaysians exploring residential areas farther away from urban areas.

“As people look to new areas outside of the city centre that meets their budget, location remains a priority but with safety and security growing in importance.

“Living further away, people generally want the benefit of space. Hence, the emergence of these three factors at the top,” Fernandez said in a statement.

In PropertyGuru’s Malaysia Property Market Sentiment Survey conducted late 2016 among 1,013 respondents, location (98 per cent), security and safety of the property location (84 per cent) and property size (73 per cent) emerged top from a list of 18 factors shown.

Apart from infrastructure and available amenities (70 per cent) muscling its way into the top eight considerations by prospective house buyers for 2017, the rest remain key priorities like last year, namely developer’s reputation (67 per cent), future developments in the area (64 per cent), whether the property is freehold or leasehold (63 per cent) and per-square-foot (PSF) price at 60 per cent. 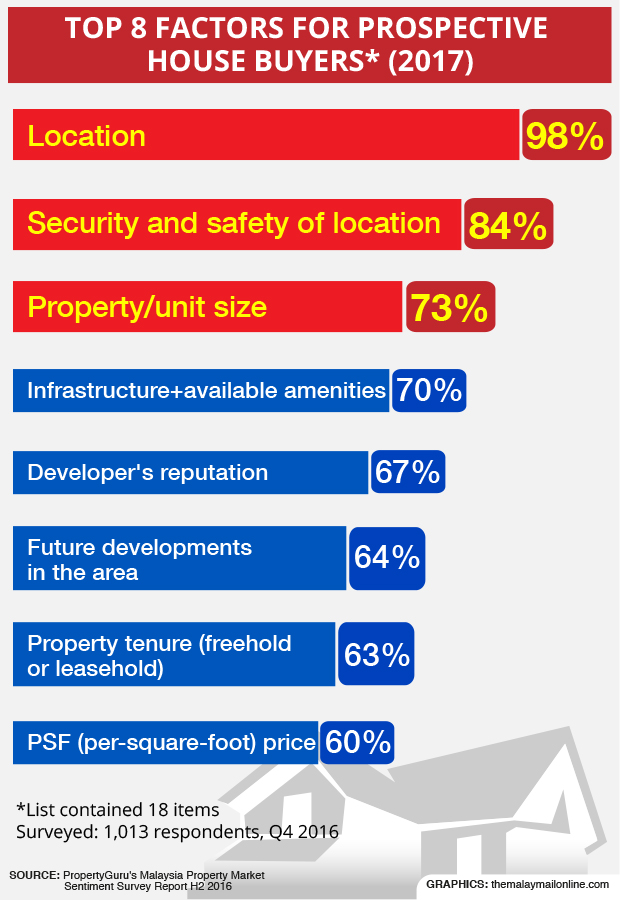 Fernandez said the poll results show a shift in mindset this year, while PropertyGuru said the lower weight given to potential rental yield may indicate that there are now more “owner-occupiers” rather than investors in the market.

“But importantly, foremost on the minds of Malaysians is to secure a property; to get a roof over their heads whereas before they would probably also be thinking of potential rental yields and capital appreciation,” he said.

In PropertyGuru’s previous poll among 326 respondents in the first half of 2016, location was also the top priority out of 18 factors at 61 per cent, followed by price per square foot (59 per cent), future developments in the area (58 per cent).

Potential rental yield ranked fourth together with property size and developer’s reputation at 57 per cent each for 2016, while security and property tenure ranked fifth each at 56 per cent. This was followed by loan eligibility (55 per cent), potential capital appreciation and subsidies stood at seventh rank or 54 per cent.

But for the survey reflecting house buyers’ considerations for 2017, potential rental yield and potential capital appreciation were both cited by 53 per cent of the 1,013 respondents and both took the 11th spot. But this does not mean that Malaysians no longer cared about prices, as demand for affordable housing stayed strong while their appetite for luxury homes fall.

With PropertyGuru’s survey results showing that close to 40 per cent of 577 respondents were prepared to spend RM300,000 to RM500,000 to buy a property in 2017, Fernandez said this indicates “the sweet spot of what the majority of Malaysians are willing to fork out for a home”.

“But 2017 is unlikely to see a recovery in the higher-end market. Properties closer to the RM1 million mark will generally be hard to sell though there will always be exceptions,” he said.

PropertyGuru said its survey showed the outskirts of Selangor is gaining traction with 29 per cent of potential homeowners now regarding it as a preferred location for houses, compared to 25 per cent in 206.

“This indicates the emergence of new property hotspots in suburban areas of Selangor — between 20-40km from the city centre such as Rawang, Sungai Buloh, Semenyih, Ulu Kelang, Ampang and others,” it said.

It added apartments and condominiums continue to be top choices followed by landed terrace homes, but demand for bungalows and semi-detached homes — which are traditionally pricier — continue to dip.

Houses in the outskirts and suburban areas are typically cheaper when compared to those in the city centre. 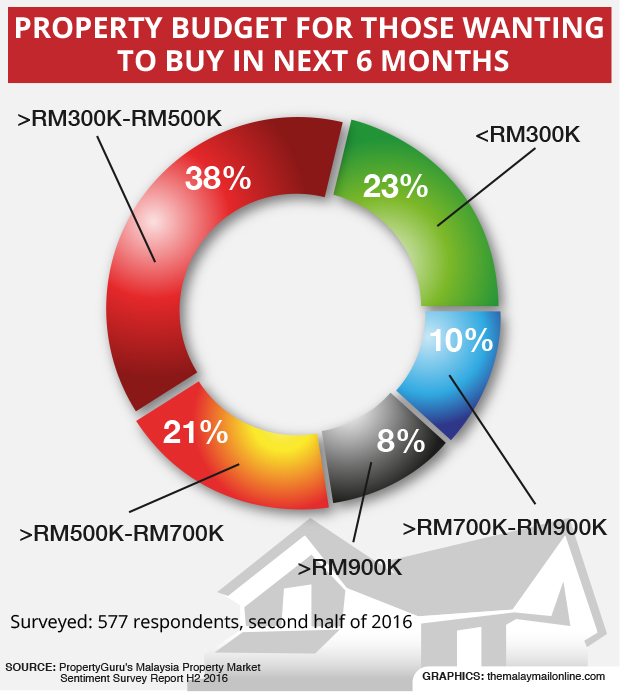