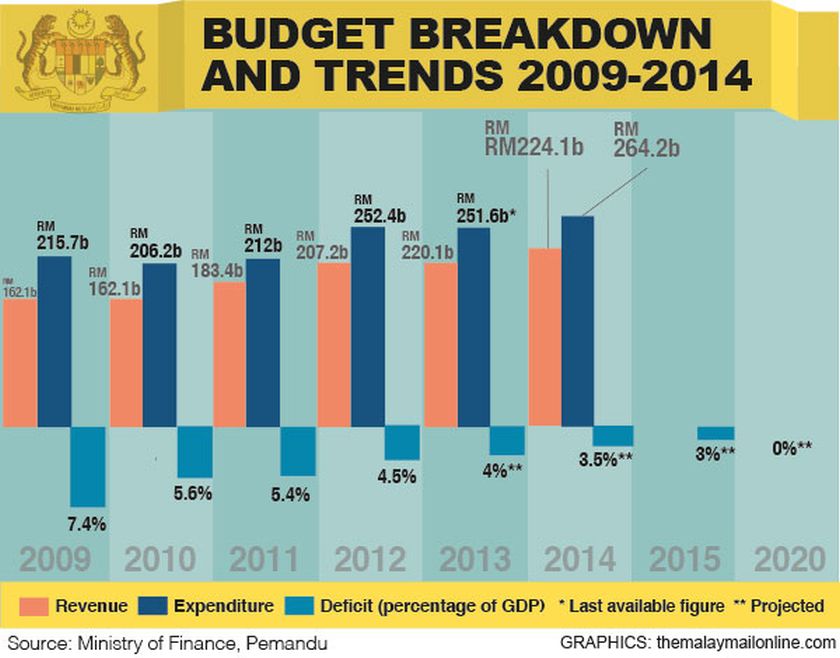 KUALA LUMPUR, Oct 10 ― Economists have urged Putrajaya to cut down on its operating expenditure to the point of forgoing the annual bonus announcement for civil servants, ahead of today's tabling of Budget 2015.

The observers said this is especially crucial as Putrajaya is expected to spend more in a series of financial aids due to be announced in the budget, in order to mollify the public ahead of more planned subsidy cuts and the impending goods and service tax (GST) in April 2015.

“Government expenditure needs to be trimmed back significantly, with reductions required in the massive but hidden subsidies and transfers to government-linked corporations, and in the bloated and inefficient bureaucracy,” Jayant Menon, lead economist with the Asian Development Bank (ADB), told Malay Mail Online through email.

“Instead of rewarding the Mandarins with a one month bonus not for productivity improvements but purposes unclear, (the) government should focus on curtailing expenditure on the civil service, which currently accounts for a massive 30 per cent of total expenditure.”

Dr Lim Teck Ghee, the director of think-tank Centre for Policy Initiatives (CPI), went further by suggesting that civil servants should not ever be entitled to bonuses in the Budget.

“There is no reason to give a bonus to civil servants at all ― not this year or any year, including an election one,” Lim told Malay Mail Online in emailed answers.

According to Lim, the civil service is already a “relatively privileged” sector, where members enjoy perks such as free medical, housing and retirement benefits that are not found in the private sector.

“The rapid ― and unjustifiable ― growth of the civil service means that the average non-civil servant tax payer already has to bear the burden of increased expenditure on the civil service, and to have them subsidise civil service bonuses is adding insult to injury, especially since there is no evidence on any productivity increase,” Lim suggested.

Civil servants are traditionally rewarded with bonuses as part of the goodies announced in every year’s Budget. In Budget 2014, 1.4 million of the civil servants received a half month bonus or a minimum payment of RM500.

This comes as the Ministry of Finance expected Putrajaya’s operating expenditure this year to increase 3 per cent to RM217.7 billion from 2013, with RM63 billion in emoluments alone.

In its annual Malaysia Economic Monitor published in June, the World Bank commented that spending on personnel such as for wages, pensions and gratuities is projected to expand by 4.5 per cent this year.

“Ensuring that spending on emoluments consistently comes close to budgeted allocations, as was the case in 2013, will be critical to the consolidation effort and also to build the credibility of the budget," the World Bank said.

Under pressure to maintain a favourable sovereign credit rating, Putrajaya has undergone subsidy cuts to reach its target to lower deficit to 3.5 per cent of the gross domestic product (GDP) this year and subsequently 3 per cent in 2015.

But with the subsidy cuts come the ballooning of living costs.

Already, the Congress of Unions of Employees in the Public and Civil Services (Cuepacs) has demanded that Putrajaya to consider offering up to a two-month bonus, and increases in some fixed allowances.

Economists, however, are expecting Putrajaya to announce a targeted subsidy system to replace the “costly and inefficient” fuel subsidy system used currently, which Menon said “distorts spending patterns and mainly benefit the better-off in society”.

“The thing is, we’re supposed to have another round of subsidy cut in first half this year, but it was postponed. Putrajaya had wanted to introduce a targeted subsidy scheme, but obviously the scheme would need some time to be implemented.

“Instead of waiting, the government decided to cut subsidy by rising fuel pump prices to keep to its set target,” said an economist with the private banking sector, who wished to remain anonymous.

The fuel pump prices of RON95 petrol and diesel were hiked by 20 sen on October 2 to RM2.30 per litre and RM2.50 respectively.

“The scope and structure of social assistance programmes, such as BR1M, are expected to be more targeted,” said Kristina Fong, the Head of Research at investment study firm RAM Holdings Group, referring to the 1Malaysia People’s Aid.

“[They are also expected to be] more efficient in addressing its objectives of alleviating the rising cost of living; for example, employing staggered disbursements rather than one-off lump-sums.”

In Budget 2014, Putrajaya allocated RM264.2 billion for its spending, with Parliament approving an additional fund of RM4.1 billion this year. The Malaysian Institute of Economic Research (MIER) predicted Malaysia’s GDP to grow 5.3 per cent this year.