The influencer and self-described ‘spiritual healer’ apologised for her actions by performing a prayer ceremony at the sacred site. ― Picture via Instagram/ alina_yogi
Follow us on Instagram, subscribe to our Telegram channel and browser alerts for the latest news you need to know.
By PRIYA KULASAGARAN

PETALING JAYA, May 5 ― A “spiritual healer” and influencer in Bali has surrendered herself to the local authorities, after earning public condemnation for posing nude at a sacred site.

The influencer, who goes by alina_yogi on Instagram and is believed to be Russian, had uploaded a 30-second clip of herself modeling naked against a large tree behind the Babakan Temple in Tabanan.

According to Merdeka.com, the head of The Law and Human Rights Office in Bali, Jamaruli Manihuruk, said the woman was in the process of turning herself in to Tabanan police.

The influencer has also posted an apology Instagram, along with a video performing a prayer ceremony at the sacred tree.

“I unknowingly made a big mistake for which I regret and I want to tell you so that you don't repeat it.

“There are a lot of sacred places in Bali and not all of them have information signs about it, as in my case,” said alina_yogi in a follow-up post.

In her own Instagram post, famed Indonesian designer Niluh Djelantik called on “trashy tourists” to “go back home”.

“You call yourself a yogi, healer, motivational speaker or whatever. It makes you think you can do whatever you want.

“We don’t have any problem with you. You are welcome to have a good time and enjoy our island. But if you (do) not respect us. Deportation and consequences are waiting.” 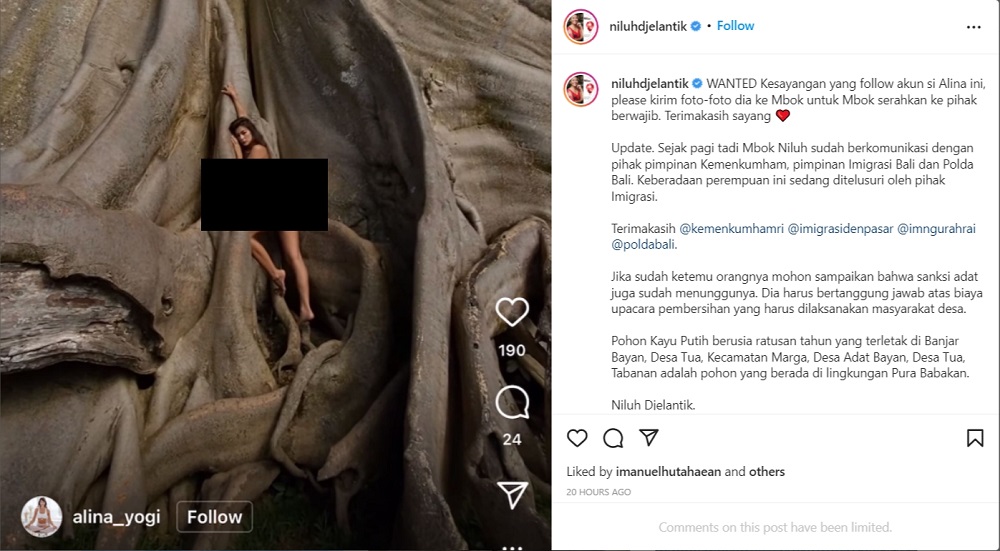 Screenshots of the now-deleted are still circulating on social media. ― Picture via Instagram/ Niluh Djelantik

Just last month another self-described wellness guru found himself blacklisted by Balinese authorities when he managed to offend two distinct cultures in one tone-deaf video.

Canadian actor and “joy expert” Jeffery Craigen shared a video of himself naked while performing the haka, a ceremonial dance of the Maori, on top of Mount Batur, a volcano considered holy by many Balinese.

AFP reported that as of last week (April 26), Craigen was still awaiting deportation ― airlines have been reluctant to transport him because he is not vaccinated against Covid-19.