#FarmToPalm: How two friends left a career in audit and started selling fresh figs in Malaysia

KARAK (Pahang), Jan 19 — There’s nothing quite like a generous smear of fig jam to go with your cheese and crackers. The touch of sweetness elevates every bite.

But fresh figs? Fresh figs can be an entirely different proposition, especially if you’ve encountered imported ones that are mushy and tasteless. You reckon this is why folks make fig jam, no?

Lawrence Yew and Cheah Zhao Yan would beg to differ. The two long-time friends turned business partners are counting on Malaysian palates craving something new, specifically fresh figs grown on local soil. Figs that are ripened on the branch and taste right.

But Yew and Cheah are not farmers, but auditors by training. Surely starting a fruit farm — much less growing a fruit many of their fellow Malaysians still find unfamiliar, at least in its fresh form — is a huge risk?

Yew shares, “Born and bred in KL, we met in high school as we were in the same classes then. During that time, both of us were studious. I was from the school band and Cheah was a Scout. Entrepreneurship was never something I thought I would be doing, as I was more academically inclined and always thought that I will be climbing the corporate ladder.”

The pair both later became auditors but the desire to start their own business was never far away, especially for Yew who was always interested in agriculture. However, farming is capital intensive so it wasn’t until 2019 when Cheah left his job that the two friends decided to pool their savings to start a fig farm.

Yew first chanced upon figs during a meeting with one of his clients: “I discovered that figs were viable in our tropical climate. Previously, the only figs that I knew were dried figs that were used to boil soup or those chewy seedy ones eaten as snacks.” Figara11 co-founder Lawrence Yew believes it’s crucial to get figs from farm to customers swiftly to retain the fruits’ freshness.

For Cheah, his first impression of figs was hardly encouraging — “imported figs from Turkey during my job assignment in Dubai; they tasted bland” — and it was only later, when he tasted fully ripe locally farmed fresh figs in Malaysia, that he saw an opportunity.

He recalls, “I then realised that fresh figs could be sweet and with a special distinct taste for each different variety, and with great potential to be the next Malaysian home-grown superfruit.”

And thus Figara11 was born. 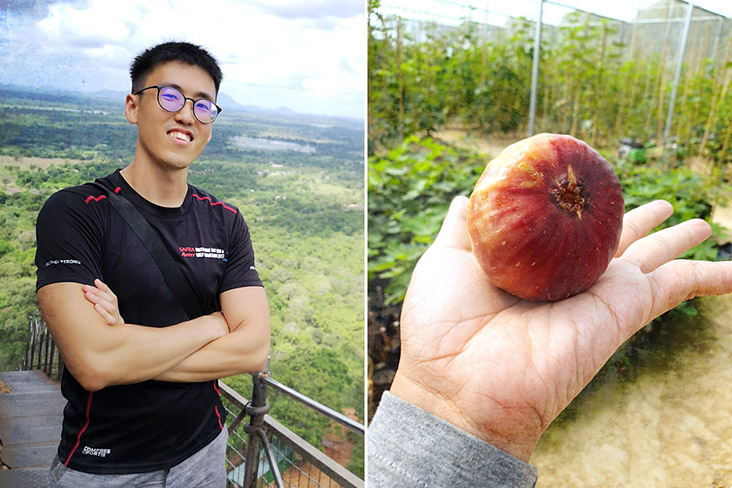 There’s nothing like the taste of a fresh fig, says Figara11 co-founder Cheah Zhao Yan

With their fortuitous change in career circumstances and renewed appreciation for the fruit, Yew and Cheah got cracking on their fig farm. Their mission? To bring fresh figs ripened on the tree to Malaysians, one household at a time.

“Most Malaysians do not know what figs should look or taste like,” says Yew. “Those who are fortunate enough to try them overseas get very disappointed with the ones found at the premium supermarkets. You see, imported figs have to be picked at semi-ripe state to last longer on shelves. The main trade-off will be the lack of flavour and sweetness.”

Figs, unlike some other fruits, do not ripen off the tree. They may become softer but not sweeter, according to Yew.

He says, “Once it is picked semi-ripe, it stays that way throughout. With that knowledge, we believe Malaysians deserve better. As figs are less well known, we need to educate customers of what to expect; what is ripe, semi-ripe and over-ripe; and what should be the right taste and texture.” 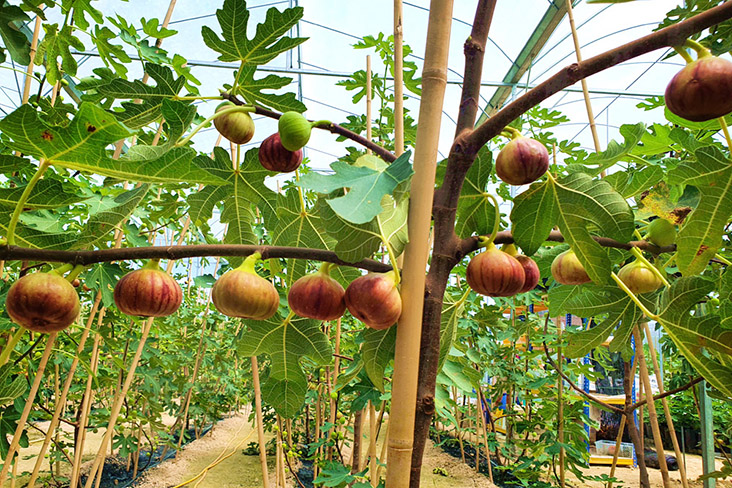 Figs can thrive in our tropical climate.

Thus, to distinguish their figs from that of other fig producers, Figara11 focuses on fresh figs that are ripened on the tree. Using a business-to-consumer (B2C) model, the fruit are picked and sent to customers within 24 hours, ensuring freshness , what the duo terms as #FarmToPalm.

Customers place a pre-order with Figara11 via their website (figara11.com/pre-order). Harvesting of figs is done daily to ensure the optimal freshness and ripeness, but the duo admits it can be a struggle to ensure every single fig bought by customers lasts more than five days. Zero waste is a constant goal.

Yew shares, “Customer satisfaction is our mantra, so we have a money back guarantee or replacing figs that are not satisfactory. Our pre-order model is very important to ensure figs are delivered fresh and routes to customers are optimised, as we want to keep delivery costs for customers low, to the extent we have our own delivery team instead of using delivery partners.”

Figs are fragile and proper handling is critical. Cheah explains that above a certain purchase — currently set at RM100 — Figara11 will absorb the delivery fees. 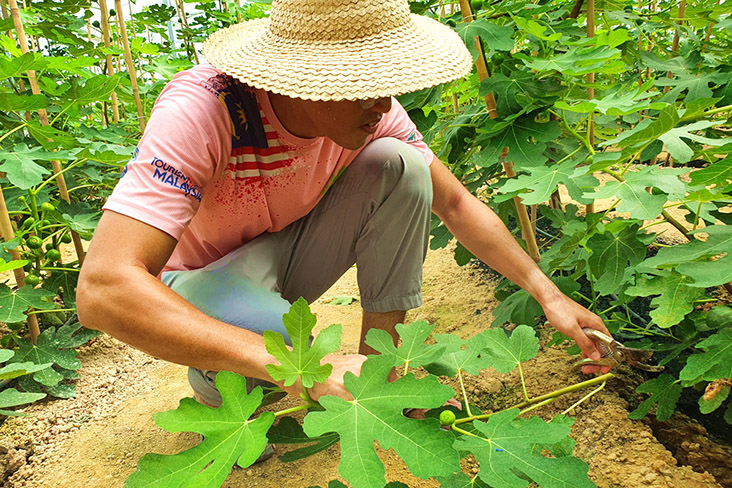 Building a farm from scratch and planting an unfamiliar fruit such as figs is a challenge.

He says, “This is something other players are unable to do. Every decision that we make, it is to ensure customers get the best experience.”

Moving forward, Yew notes that their goal is to produce the highest quality figs all year round and to send fresh figs from the farm directly to customers.

He adds, “After a few months of selling the figs, we found that our market is of the more affluent consumers. We are sold out almost every day, and our lower grade figs are well received for business use.”

Figara11 also transforms their fresh figs into products such as fig jam, fig leaf tea and prebiotic beverages. They are also exploring dried figs and other products. 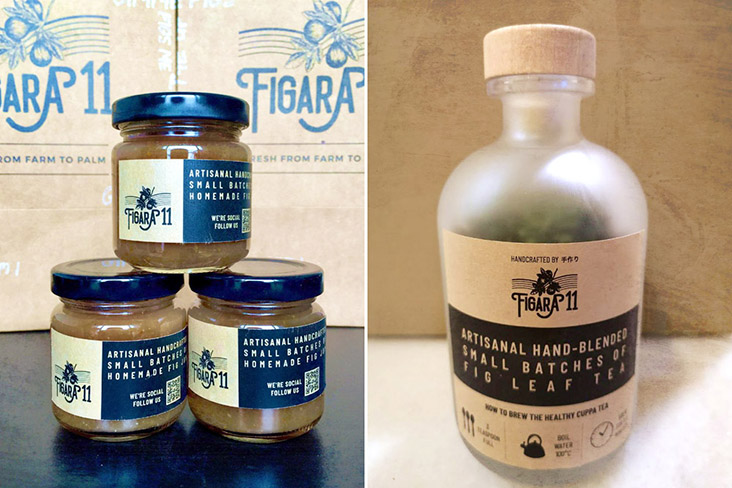 Yew explains, “For our fresh figs, some customers request a specific level of ripeness. With our fig jam, we slowly developed other variations based on customer feedback. As we do not wish to compete with overseas fig producers, we are trying to avoid going into dried figs but who knows, one day we might because there are requests for them.”

The latest result of their painstaking development process is Gugu Guts — a prebiotic drink created with the notion that the fig itself is a prebiotic as it is rich in pectin, a soluble fibre. The name is partly derived from ichijiku, which is Japanese for figs.

Other “super fruits” such as pomegranates, goji berries, cranberries and mixed berries are added, as well as prebiotic extracts from chicory roots.

Yew says, “Gugu Guts help people with constipation or digestion issues, and improve conditions that arise from leaky guts. These are all due to the imbalance of the gut microbiome, where bad bacteria thrives over the good bacteria. Introducing prebiotics is essential due to the lack of a balanced diet nowadays, allowing the fuel to be given to good bacteria to flourish.” 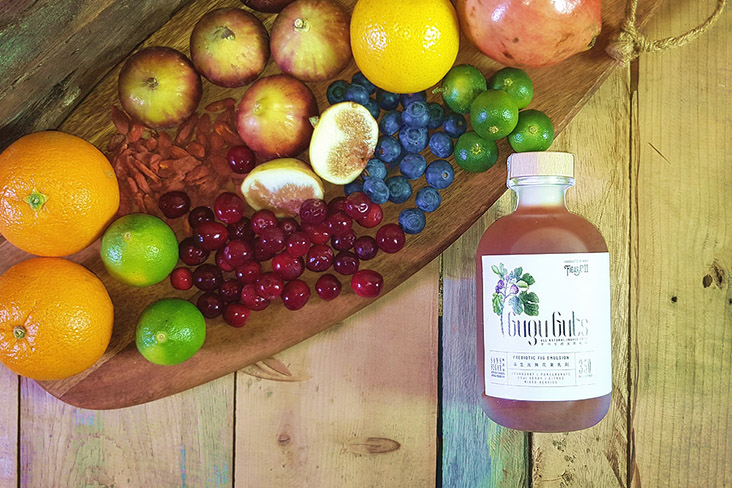 As they are mainly an online outfit, expanding Figara11’s business-to-business (B2B) base would allow for a greater diversity of fig products in the market. Cheah says, “We are very keen on collaborating with brands that are looking for the same outreach, and believe that farm produce should be as fresh as they can be to be delivered to customers.”

The duo is also looking to gradually expand their farm, due to the delicate nature of figs and their short shelf life. Yew says, “Consumer education is crucial. As much as we like to have it done faster, we are likely only able to do that once the customer base is solid to ensure zero waste.”

With figs this fresh and this sweet, one wouldn’t be surprised if a clean plate is all that is left.