Lawyer: Zahid’s 25 money-laundering charges must go away as funds were ‘donations’, not from illegal activities

Datuk Seri Ahmad Zahid Hamidi is seen leaving the Kuala Lumpur High Court September 9, 2021. ― Picture by Miera Zulyana
Follow us on Instagram, subscribe to our Telegram channel and browser alerts for the latest news you need to know.
By IDA LIM

Ahmad Zahid’s lead defence lawyer Hisyam Teh Poh Teik was arguing why 25 of the 27 money laundering charges against his client must fall, arguing that the key ingredient of these charges — namely the involvement of money from unlawful activities — has not been proven.

Hisyam also argued that the prosecution had failed to close the “gaps” or “loopholes” in evidence that would have been necessary to show that the funds involved were from unlawful activities.

For the 25 money laundering charges that Teh focused on today, Ahmad Zahid was accused of having given instructions to law firm Lewis & Co’s partner Muralidharan Balan Pillai on 25 separate occasions to put funds totalling RM53,878,347.95 or over RM53 million that were from unlawful activities into fixed deposit accounts.

However, Teh today argued that all 25 charges under Section 4(1)(a) of the Anti-Money Laundering, Anti-Terrorism Financing and Proceeds of Unlawful Activities Act 2001 was not proven to involve money from illegal activities.

Citing the evidence given by the prosecution’s witnesses and by owners of cheques that were used to put the funds into fixed deposits, Teh argued that the money that came in under the 25 charges were actually “donations” from individuals and companies for Yayasan Akalbudi — a charitable foundation where Ahmad Zahid is a trustee.

Teh also argued that Ahmad Zahid mostly did not have any connection or link to the owners of the cheques.

“The accused, in most occasions, did not know or had any nexus with the owners of the cheques,” he argued.

Teh also said the transactions were all openly maintained and kept in Lewis & Co’s trust accounts and that the money trail for the cheques could be traced with Ahmad Zahid making no attempts to conceal them, further arguing that the lawyer Muralidharan had given strong evidence that there were no elements of illegality.

He also said the prosecution has not produced any evidence that the funds were proceeds from unlawful activities, or any evidence that any of the serious offences amounting to unlawful activity — as listed under local anti-money laundering laws — had been committed, or that Ahmad Zahid’s conduct could lead to or had led to any of these serious offences being committed.

He concluded that this meant that the very first ingredient or basis for the 25 money-laundering charges against Ahmad Zahid was not proven, as the element of proceeds of unlawful activities has not been satisfied.

Ultimately, Teh was arguing why the prosecution had failed to prove a prima facie case for his client to defend himself against and why such charges should be dismissed. 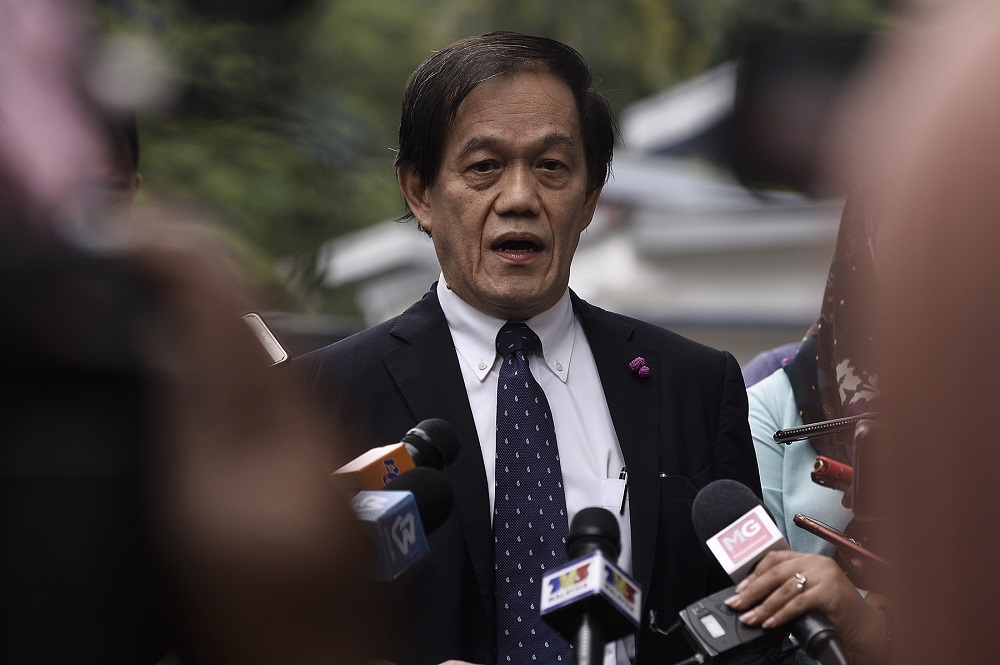 Datuk Seri Ahmad Zahid Hamidi’s lead defence lawyer Hisyam Teh Poh Teik was arguing why 25 of the 27 money laundering charges against his client must fall, arguing that the key ingredient of these charges — namely the involvement of money from unlawful activities — has not been proven. ― Picture by Miera Zulyana

In this trial, Ahmad Zahid ― who is a former home minister and currently the Umno president ― is facing 47 charges, namely 12 counts of criminal breach of trust concerning charitable foundation Yayasan Akalbudi’s funds, 27 counts of money laundering, and eight counts of bribery charges.

The trial, where 99 prosecution witnesses had testified previously, has now reached the end of the prosecution’s case. It is now at the stage of oral submissions which started this week, where both Ahmad Zahid’s lawyers and the prosecution will present their final arguments verbally before the court decides if the prosecution has proven a prima facie case.

Over the past three days, Ahmad Zahid’s lawyers had presented arguments on why the 12 criminal breach of trust charges against him cannot stand, as well as why he should have “immunity” from prosecution for 46 of the entire 47 charges that he is facing. It is yet to be the prosecution’s turn to present their arguments in court.

When the trial resumes as scheduled next Monday, Hisyam is expected to address the court regarding the 26th and 27th money laundering charges that his client is facing.

The 26th money laundering charge is about Ahmad Zahid’s alleged instructions for the purchase of two bungalows worth a total of RM5.9 million via a cheque involving proceeds from unlawful activities.

The 27th money laundering charge is over his alleged instructions to moneychanger Omar Ali Abdullah to convert alleged illegal proceeds of RM6,885,270.20 or RM6.8 million from cash into 30 cheques that were then given to law firm Lewis & Co to be placed in fixed deposits.

Just before the court proceedings ended today, Ahmad Zahid’s lawyer Hamidi Mohd Noh applied to the High Court for the trial to start in the afternoon next Monday.

Hamidi explained that the Dewan Rakyat will reconvene on September 13 with the Yang di-Pertuan Agong scheduled to deliver his royal address in the morning, saying that Ahmad Zahid as an MP would have to attend the morning-only sitting in the Dewan Rakyat.

High Court judge Collin Lawrence Sequerah agreed that Ahmad Zahid has to be present at the royal address, but said the trial will proceed later at 2.30pm.