KUALA LUMPUR, June 10 — Another 73 people died from Covid-19 around the country today, raising the cumulative fatality to 3,684 since the outbreak of the disease in Malaysia last year.

Dr Noor Hisham Abdullah in his statement later said that the youngest fatality today was a 13-year old local woman with various comorbidities who died in Sultanah Bahiyah Hospital in Alor Star, Kedah.

He said the oldest casualty was a 104-year old local woman with dyslipidemia who died in Lam Wah Ee Hospital in Penang.

Selangor reported 29 deaths, 11 in Johor, eight in Negri Sembilan, four each in Kuala Lumpur, Kedah, Labuan, and Penang, three deaths in Pahang, two deaths in Kelantan, while one death each was reported in Terengganu, Melaka, Sabah and Perak.

Yesterday it was reported that in the Health Ministry’s latest report on the 22nd epidemiological week from May 30 to June 5, there was a weekly mean number of 1,705 ICU beds available in public hospitals, with 1,527 being the mean number of such ICU beds collectively occupied by confirmed, suspected and probable Covid-19 patients, which translates to a mean occupancy rate of 90 per cent.

As for private hospitals, the same Health Ministry report stated the mean number of ICU beds available weekly to be 124, with a mean number of 75 such beds being occupied collectively by confirmed, suspected and probable Covid-19 patients, which translates to a mean occupancy rate of 61 per cent. 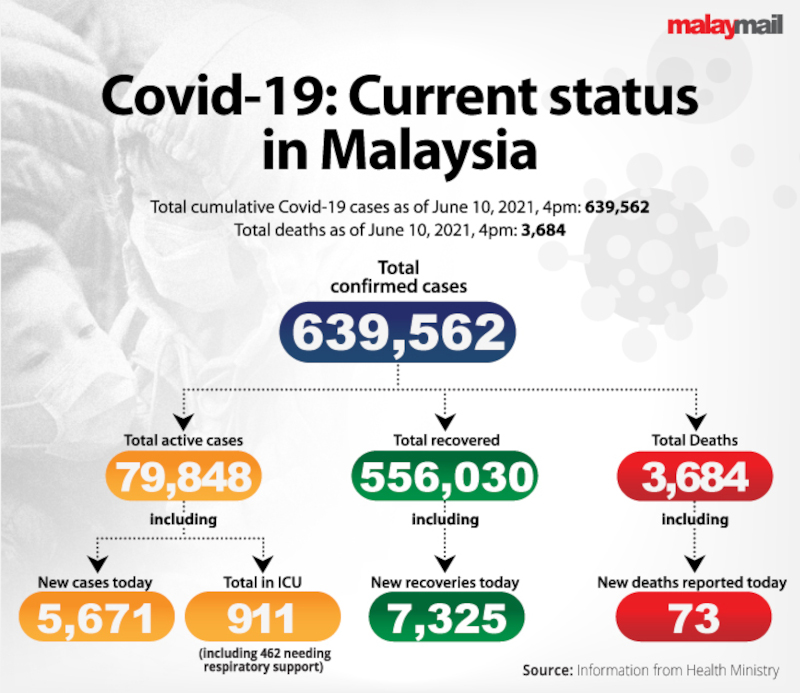