KUALA LUMPUR, Feb 24 — The number of new Covid-19 cases recorded today spiked to 3,545, increasing by more than half of yesterday’s cases, with over 1,000 new cases detected in Negri Sembilan.

Meanwhile, 3,331 people were reported to have recovered from the disease, leaving active cases at 30,677.

Only one case reported today was imported.

Negri Sembilan recorded a total of 1,392 cases today, becoming the largest contributor of new cases by state — displacing Selangor which had topped the list the most in recent months.

Dr Noor Hisham said that the rise in cases recorded in Negri Sembilan was due to the active screening of people involved in the Sungai Gadut Industrial cluster that was announced on February 22.

Perlis recorded no new cases for the second day in a row today.

The eight men and four women, who were recorded dead today, were aged between 52 and 98, with most having a history of chronic diseases such as diabetes, hypertension or stroke.

Only one of them was a non-Malaysian.

Dr Noor Hisham said there are 189 Covid-19 patients warded in intensive care units (ICUs) across the country, with 88 of them needing breathing assistance.

In the past 24 hours, eight new clusters were also recorded.

Collectively, these clusters are responsible for 213 cases to date, with the Lorong Bakau cluster recording the most (50 cases).

Meanwhile, active cases make up 10.52 per cent of all cases recorded here. 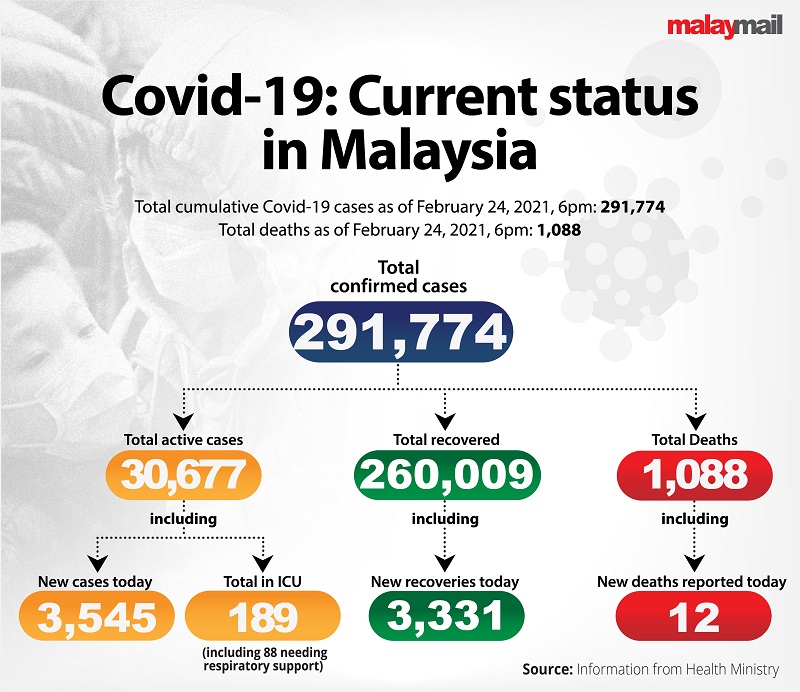