COMMENTARY, March 8 — Experts appear no closer to solving the enigma of Flight MH370 one year after the Malaysia Airlines (MAS) jet vanished without a trace, making it one of the world’s biggest plane mysteries.

Contact with Flight MH370, which carried 239 people on board comprising mostly China nationals, was lost less than an hour after take-off from the Kuala Lumpur International Airport at 12.41am local time en route to Beijing, China, on March 8 last year.

There was no distress signal and two communication systems aboard the Boeing 777 commercial jet were shut down during the flight in what experts believe was a deliberate move.

The transponder — which identifies the plane and transmits its altitude and location to ground controllers — was turned off at 1.21am local time as the aircraft flew into Vietnamese airspace from Malaysian air traffic control over the South China Sea, a vulnerable point noted by aviation experts in a Reuters report as Malaysian and Vietnamese controllers could assume that the plane was the other’s responsibility.

Another unanswered question is why Flight MH370 veered off from its original flight path and turned west back over the Malaysian peninsula.

Malaysian military spotted Flight MH370 over the Straits of Malacca but did not intercept the commercial plane, saying it was not deemed “hostile.” The local military’s failure to intercept Flight MH370 and contradictory accounts from various government officials in the early days of the plane’s disappearance had sparked criticism of Malaysia’s competency in handling the aviation disaster.

The search is now focused underwater on a 60,000 square kilometre section of the southern Indian Ocean off West Australia where the plane is believed to have crashed.

An Inmarsat satellite had picked up several hourly “handshakes” from the plane that showed that Flight MH370 had gone on flying for hours after vanishing from radar screens, suggesting that the jet likely crashed in the deep waters of the vast, forbidding ocean.

Despite the fleet of planes, ships and submarines contributed by 26 countries in the initial search last year after Flight MH370 disappeared, no wreckage or bodies have been discovered in the hunt that is expected to be the most expensive in aviation history. 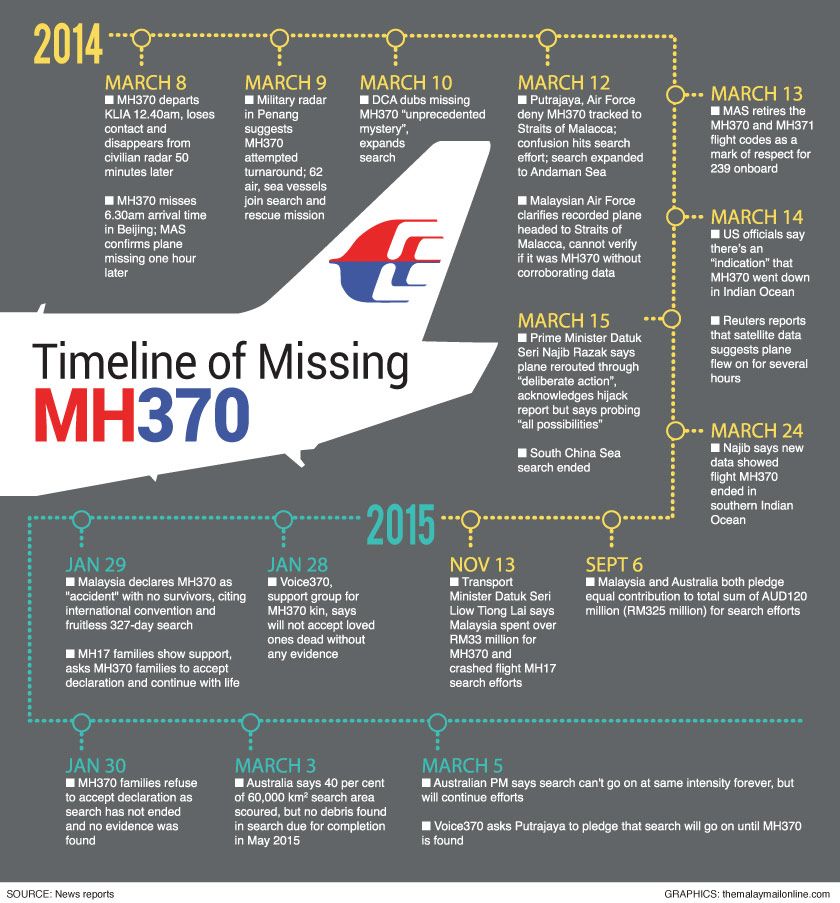 The disappearance of Flight MH370 prompted global aviation authorities to push for the implementation of real-time flight tracking.

International news wire the Associated Press reported last Sunday Australian Transport Minister Warren Truss as saying that Australia, Malaysia and Indonesia will lead trials of a new method that will enable airlines to know the position of their planes every 15 minutes, instead of the previous 30 to 40 minutes’ rate. A deviation in the jet’s movement will reportedly lead to tracking every five minutes or less.

The test runs are scheduled under the International Civil Aviation Organization (ICAO), the United Nations’ aviation arm, but international standards will only be implemented November 2016 at the earliest, according to a Wall Street Journal report last Sunday.

The US paper reported that there is some opposition to improving plane tracking technology due to cost concerns, quoting former US’ National Transportation Safety Board member Richard Healing as saying that there are “a lot of industry people” who do not really think that tracking is a safety feature and who see the disappearance of Flight MH370 as a “one-off event,”

Inmarsat said it is supporting the flight-tracking trial that will assess the effectiveness of aircraft reporting every 15 minutes in airspace over oceans, using a function called the Automatic Dependent Surveillance-Contract (ADS-C).

“Automatic Dependent Surveillance-Contract (ADS-C) is a function on an aircraft that broadcasts position, altitude, vector and other information for use by air traffic control facilities for surveillance and by airlines for tracking,” an Inmarsat spokesman told Malay Mail Online in an email interview recently.

“On a per flight basis, the cost of tracking equates to a very small percentage of the total operational costs of an aircraft. Additionally, like other segments of the telecommunications sector, data and voice transmission costs are falling,” the British satellite communications firm added.

Airservices Australia, a government-owned agency in charge of the country’s airspace, has reportedly said that the new flight-tracking method being tested would not necessarily have allowed Flight MH370, whose tracking systems were turned off, to be monitored by air traffic control to the point where it crashed.

“What would have happened while the system is operating, we’d know exactly where the aircraft was. If somebody had turned the system off, we’re in the same set of circumstances as we’ve experienced on the latter part of the flight of MH370,” Airservices Australia chairman Angus Houston, who had led the MH370 search, told the Associated Press.

Despite the baffling nature of the disappearance of Flight MH370, the impact of the plane crash on the local aviation market appears to be minimal.

Aviation analyst Shukor Yusof, founder of Endau Analytics, said the incident has not generally hurt other airlines or Malaysians’ appetite for travel.

“It has affected demand from China for MAS, but elsewhere, it hasn’t affected other carriers. It’s only specific to MAS,” Shukor told Malay Mail Online recently.

“Demand from China has shrunk. It’s better than the first three to six months of last year, but it hasn’t gone to the same level pre-MH370.  I don’t think it’ll ever get back to that level unless and until there’s some closure in terms of the families getting some evidence that the plane had crashed,” he added.

The analyst said MAS planeloads from China and other Asean destinations were down by 30 per cent the first three months after Flight MH370 disappeared last March.

He added that the planeloads have picked up since and that MAS planes flying from China are now half full on good days, but still falling short of previous planeloads of around 80 per cent.

“I do hope they find something for the sake of the families. But it does seem very grim that as the days, weeks and months go by, we may never find it,” said Shukor.

US news network CNN, in particular, covered the missing plane 24 hours a day and turned to discussing speculative theories, even something as ridiculous as black holes, amid a lack of new information.

The vanishing of the plane also made aviation jargon like “ACARS”, “transponder” and “handshakes” part of Malaysians’ everyday lexicon.

ACARS, or the Aircraft Communications Addressing and Reporting System, allows the plane to send data like engine status and fuel levels, while the transponder transmits to ground radar information like the plane’s identity, altitude and location.

“Handshakes” are identification data sent between the plane and a communications satellite back and forth.

The aviation puzzle spawned a slew of conspiracy theories too, ranging from the US military covering up the disappearance of the jet to the plane being abducted by aliens.

Yet, for all the absurdity of the various conspiracy theories claiming that the plane is hidden in some remote airfield somewhere, some of the passengers’ families and relatives still refuse to accept the deaths of their loved ones.

Without a shred of physical evidence, not even as much as a lifejacket, the families’ irrational belief that the passengers are still alive despite a year of silence is somewhat understandable.

“I believe he is still alive, still somewhere out there,” Kelly Wen, 30-year-old wife of Chinese national Li who was on Flight MH370, told Malay Mail Online recently.

Another Chinese national, Zhang Yan Ming, whose only daughter was on the doomed flight, said he prays every day for her return.

“With her disappearance, there’s no meaning in my life,” the 68-year-old man told Malay Mail Online.

It is the frustrating lack of answers, with only remote satellite “pings” analysed on paper to indicate the final resting place of Flight MH370, that the passengers’ kin are unable to deal with.

“They cannot just call it an accident,” said Chinese national Li Yue Ha, whose 29-year-old daughter was on the plane.