Services not shortcut out of middle-income trap, ADB tells Malaysia

KUALA LUMPUR, Aug 27 — Industrialisation remains a vital step countries like Malaysia can ill afford to skip if they hope to beat the middle-income trap, the Asian Development Bank (ADB) cautioned as more emerging nations gave in to the siren call of the services sector.

In its flagship annual statistical publication Key Indicators for Asia and the Pacific 2013, ADB noted that Malaysia was among nations whose economies were transforming more slowly compared to heavily industrialised economies such as Hong Kong, Japan, South Korea, Singapore, and Taipei.

This warning comes as Malaysia continues to move away from manufacturing towards knowledge-based economy and the services sector, having started down the route with the Third Outline Perspective Plan (OPP3) between 2001 and 2010.

“Our analysis indicates that manufacturing is a developmental stage that generally cannot be bypassed on the road to becoming a high-income economy,” said a special chapter in the report titled “Asia’s Economic Transformation: Where to, How, and How Fast?”

“Virtually all countries that are rich today industrialised in the past — for a sustained period, their shares of both manufacturing output and manufacturing employment reached at least 18 per cent in gross domestic product (GDP) and total employment.”

In its Economic Transformation Plan to turn Malaysia into a high-income nation come 2020, Putrajaya is targeting to make financial services the “bedrock” of the country’s economy and for it to contribute an additional RM120 billion to the country’s income by then, according to the Performance Management and Delivery Unit (Pemandu).

“Right now, as services boom in the region, it’s tempting to shun industrialisation, but it will be a serious mistake if a country wants to be prosperous,” ADB’s chief economist Changyong Rhee said in a separate statement.

Once an agrarian economy, Malaysia made a concerted push towards industrialisation during the Mahathir administration but has gradually moved away from manufacturing since then.

The services sector is now the biggest contributor to the economy, accounting for nearly half of the country’s GDP, and total employment. It hit a peak of 48.6 per cent of GDP in 2012.

Since 2008, manufacturing has hovered around 41 per cent of GDP.

Malaysia was placed in the same pool of slow developers such as China and Thailand. Bangladesh, India, Pakistan and the Philippines were grouped as moving on a much slower pace than Malaysia. 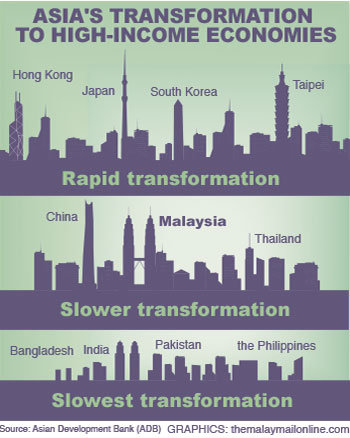 ADB noted that Malaysia had a well-documented success in electrical and electronics manufacturing since the early 1970s, but the advantage seems to have reached a plateau in recent years compared to South Korea which grew at a 20 times faster rate.

According to a research by ADB researcher Jesus Felipe in 2012, South Korea has achieved new comparative advantage on significantly different products than those it manufactured five years ago.

In comparison, Malaysia only achieved new comparative advantage in products which are very similar to those it has exported five year ago.

Another analysis also pointed out that despite its dependence on multinational companies, Malaysia has failed to obtain a transfer of technologies and capabilities from them, resulting in a lack of competitive local firms.

The challenge for Malaysia, ADB said, will be to upgrade and deepen its already diversified industries, either by developing domestic capabilities or localise technologies from foreign direct investment (FDI) efforts.

ADB had earlier this year warned that Malaysia could remain stuck in the middle-income trap from failure to make the leap from exploiting cheap labour and natural resources to producing and exporting more technologically advanced products.

The report by ADB, however, differed slightly from the point made in a paper by the World Bank in April called “How to Avoid Middle-Income Traps? Evidence from Malaysia”.

According to World Bank, Malaysia has not been able to offset its manufacturing export weakness with a strong services sector compared to Singapore and Hong Kong which have reached the high-income nation rank through a boost in the services sector.

“While other developing countries are reaping the benefits of globalisation of services, Malaysia has yet to take advantage of this phenomenon,” the paper said.

In a recent release by Bank Negara Malaysia (BNM), the manufacturing sector experienced growth on the second quarter of 2013 thanks to domestic demand, expanding by 3.3 per cent, a marked increase from 0.3 per cent in the last quarter.