A man took to Twitter to complain about a broken escalator at the LRT Sri Rampai station five years after his first complaint. — Picture courtesy of Twitter/Muz
Follow us on Instagram, subscribe to our Telegram channel and browser alerts for the latest news you need to know.
By ARIF ZIKRI

KUALA LUMPUR, Nov 11 — A man took to Twitter to complain about a broken escalator at an LRT station — exactly five years after his first.

He shared that he had initially submitted a complaint to the public transport provider, Rapid KL via Twitter in 2016 where Rapid KL responded with an apology and said that they were currently waiting for the escalator’s spare parts.

“I’ve waited for five years now (the original tweet was exactly from five years ago).

“The government has changed three times already, this escalator since 2016 still hasn’t received its spare parts?” Muz wrote in his Tweet to Rapid KL.

Rapid KL has since apologised to Muz for the mistake in their initial reply.

“After a review was made, we would like to clarify that this escalator is not under the maintenance jurisdiction of Rapid KL.

“We advised you to submit your complaint to the Kuala Lumpur City Hall (DBKL), thank you,” Rapid KL replied to Muz’s tweet along with a photo of their maintenance jurisdiction’s sign and a link to DBKL’s complaint site. 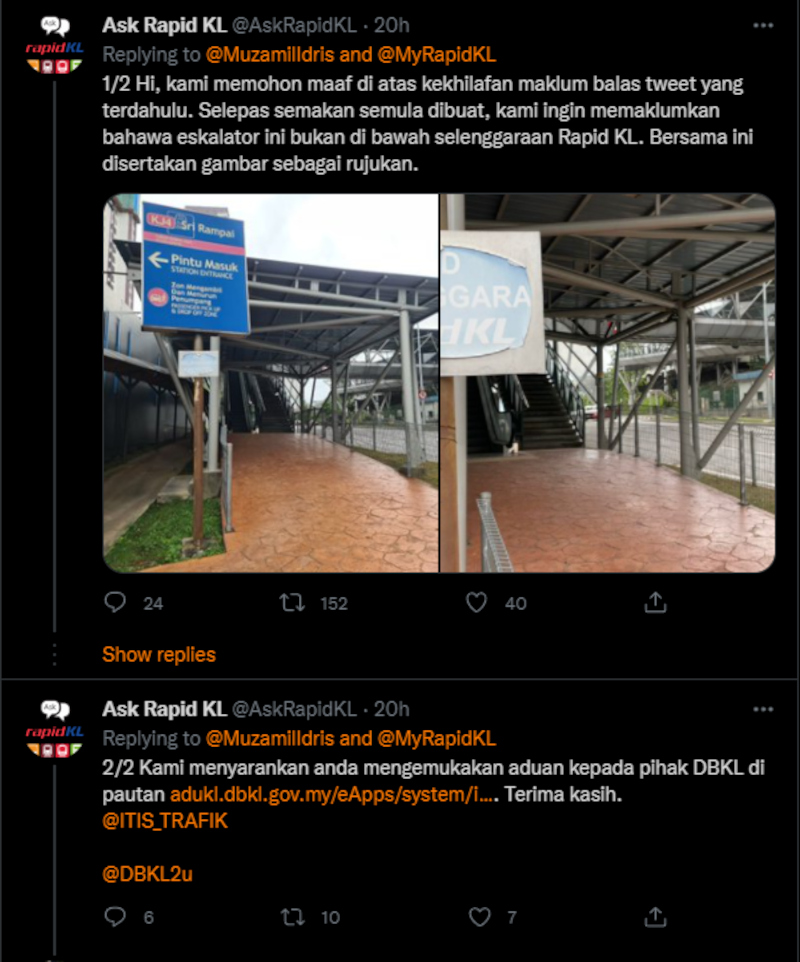 Muz’s tweet has garnered over 4,000 likes and retweets with social media users replying to the tweet by sharing their own mishaps and jokes.

“I entered Uni in 2016, spent a lot of time using the LRT station at Sri Rampai, the escalator operated only ONCE, and then never again.

“Then I graduated in 2019, now I’m continuing my degree and it’s still not operating, what a country,” Twitter user, dihahmfrds replied to the tweet.

“Try calling a minister to drop by there, the escalator will definitely get fixed the next day,” replied user divtene.