Farmers try to remove a barricade during a tractor rally to protest against farm laws on the occasion of India's Republic Day in Delhi January 26, 2021. — Reuters pic
Follow us on Instagram, subscribe to our Telegram channel and browser alerts for the latest news you need to know.

SINGHU (India), Jan 26 — Indian farmers protesting against agricultural reforms breached barricades and clashed today with police in the capital, who fired tear gas to restrain them, shortly after a convoy of tractors trundled through the city’s outskirts.

Growers, angered by laws they say help large, private buyers at the expense of producers, have camped outside New Delhi for almost two months, posing one of the biggest challenges to Prime Minister Narendra Modi since he came to power in 2014.

“Modi will hear us now, he will have to hear us now,” said Sukhdev Singh, 55, a farmer from the northern breadbasket state of Punjab, as he marched past the barricades.

He was one of hundreds of protesters, some on horseback, who broke away from the main route of the tractor protest to head for central New Delhi, which hosts an annual Republic Day military parade.

They commandeered cranes and used ropes to tear down road blocks miles from routes approved by the police, forcing constables in riot gear to fall back and let them pass, Reuters witnesses said.

Reuters could not immediately reach police officials for comment. 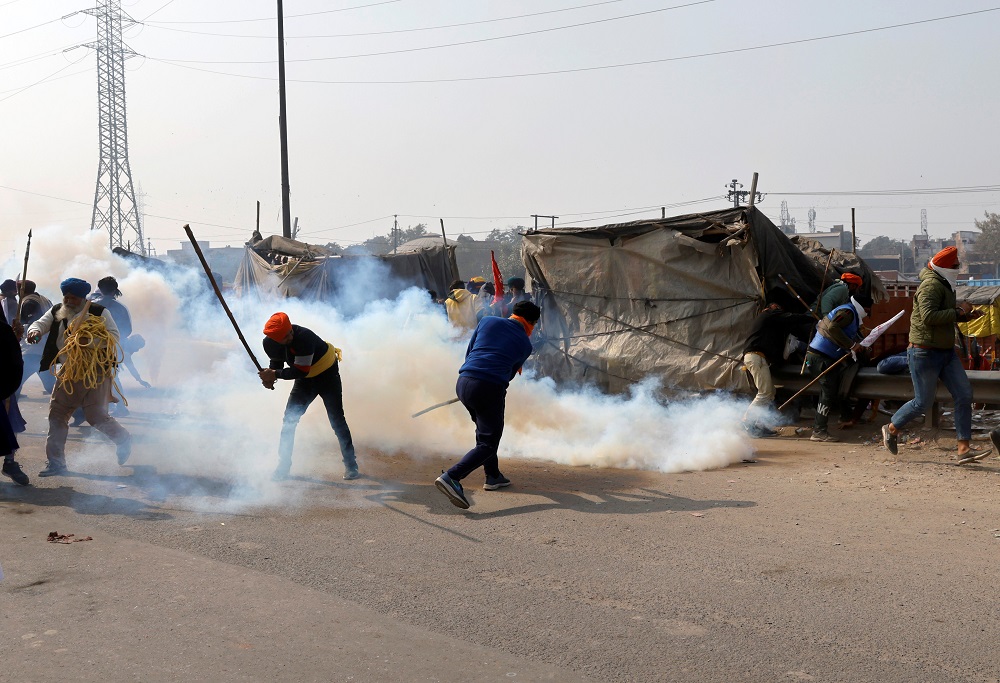 Farmers use sticks to push away tear smoke shells fired by police during a tractor rally to protest against farm laws on the occasion of India's Republic Day in Delhi January 26, 2021. — Reuters pic

Responding to reports of the clash, protest organiser Samyukt Kisan Morcha said only one of its parades had deviated from pre-arranged routes.

“Except for one group...our news is that all parades are happening on the pre-decided routes along with police,” the grouping of farm unions said in a statement.

Earlier, tens of thousands of bearded and turbanned farmers, many bundled against the winter cold, began the day by driving a convoy of tractors festooned with the Indian tricolour and the flags of their unions through the city fringe.

Agriculture employs about half of India’s population of 1.3 billion, and unrest among an estimated 150 million landowning farmers worries the government.

Nine rounds of talks with farmers’ unions have failed to end the protests, as farm leaders rejected the government’s offer to delay the laws for 18 months, making a push for repeal instead.

“They have the resources to mobilise support, and to continue the protest for a long time. They have also been very successful in keeping the protest really focused.”

The protests threaten to overshadow the annual military parade to mark the 1950 adoption of India’s constitution.

“They could have chosen any other day instead of January 26 but they have announced now,” Agriculture Minister Narendra Singh Tomar told media yesterday.

“Conducting the rally peacefully without any accident would be the concern for farmers as well as police.” — Reuters