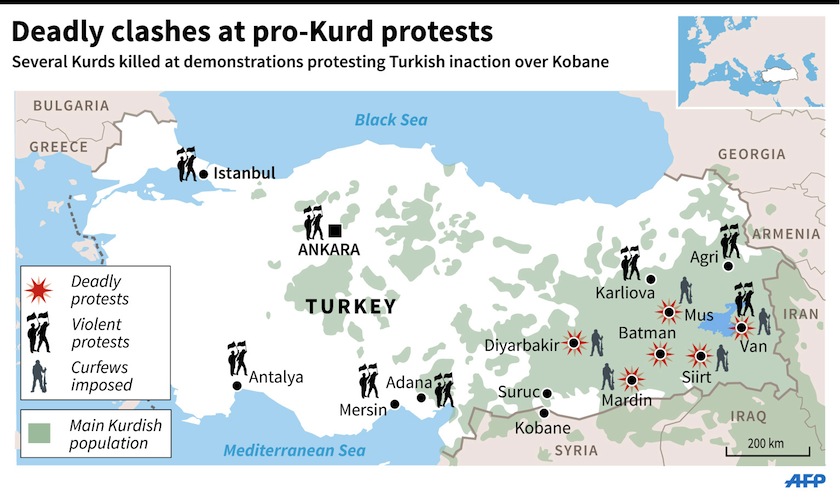 KOBANE (Syria), Oct 9 — US-led warplanes yesterday intensified bombing raids against jihadists advancing on the strategic Syrian border town of Kobane, in a desperate bid to help Kurdish forces who are holding out despite the Islamic State group’s three-week assault.

US and Jordanian aircraft pounded IS positions near Kobane, destroying barracks, armed vehicles and a logistic command, even though the Pentagon admitted that air strikes alone were not enough to prevent the strategic town from falling.

Across the border in Turkey, protests over Ankara’s failure to come to the rescue of Kobane’s predominantly Kurdish residents sparked clashes that claimed at least 21 lives and forced authorities to declare a curfew in six provinces.

US President Barack Obama said after meeting his defence chiefs that there would be no easy victory against the IS group, but that a growing coalition was resolved to confront the jihadists.

A Pentagon spokesman earlier said the air offensive needed to be coupled with troops on the ground to defeat the IS group.

But such a “capable” force currently do not exist on Syrian soil, Rear Admiral John Kirby said.

With pressure growing for international action to halt the jihadists’ advance, France threw its weight behind calls for a buffer zone on the Syrian-Turkish frontier.

The top US and British diplomats said they were willing to “examine” the idea of a safe haven, but the White House later denied it was considering such a move.

Kobane has become a symbol of resistance against the IS group, which proclaimed an Islamic “caliphate” across swathes of Iraq and Syria, carrying out beheadings and other atrocities.

Kurdish forces “continue to control most of the city and are holding out against the (IS jihadists),” the US military said.

The three-week IS group assault on Kobane has sent some 200,000 people flooding across the border into Turkey, and some residents said hundreds more remained two days after jihadists breached the town’s defences.

“There are 1,000 civilians who refuse to leave,” said activist Mustafa Ebdi.

US and coalition aircraft targeted IS fighters near the town yesterday, launching 14 attacks, the US military said.

The sounds of heavy gunfire and mortar shells were heard from the Turkish side of the border, an AFP reporter said, as fierce street battles raged.

“The raids helped prevent the fall of the town, but what is needed now is weapons,” said Ebdi.

An IS fighter launched a suicide truck bombing in east Kobane, but there was no immediate news of casualties, the Syrian Observatory for Human Rights said.

Observatory directory Rami Abdel Rahman said IS forces had advanced around 100 metres (yards) towards the town centre Wednesday evening, but that fighting had subsided slightly.

But he added that reinforcements for the jihadists were coming in from Syria’s Raqa province.

The Observatory says about 400 people, more than half of them jihadists, have been killed in and around Kobane since the assault began in mid-September.

Kobane, also known as Ain al-Arab, would be a major prize for the jihadists, giving them unbroken control of a long stretch of Syria’s border with Turkey.

France said it supported a proposal by Ankara to create a safe zone along its frontier with Syria to ensure security and to host fleeing refugees.

In a telephone conversation with his Turkish counterpart, Recep Tayyip Erdogan, President Francois Hollande “gave his support to the idea... of creating a buffer zone between Syria and Turkey to host and protect displaced people,” the French presidency said.

In Washington, US Secretary of State John Kerry told reporters: “The buffer zone is an idea that’s out there. It’s worth examining; it’s worth looking at very, very closely.”

British Foreign Secretary Philip Hammond said after meeting Kerry: “We are at the stage of exploring this.”

But White House spokesman Josh Earnest countered, saying “it’s not something that is under consideration right now”.

Ankara has come under increasing pressure to act in Kobane, but its response has been complicated by concerns over emboldening Kurdish separatists, who have waged a deadly insurgency in Turkey for the past three decades.

The United States is also pushing Ankara to join the fight, dispatching retired general John Allen, and the pointman on Iraq, Brett McGurk, to Ankara for two days of talks in which they will try to squeeze commitments from Turkey.

Turkey has detained dozens of Kurds who crossed the border from Kobane on suspicion of having links with the outlawed Kurdistan Workers’ Party (PKK), officials said Wednesday.

The United States, along with Arab, European and other allies have launched nearly 2,000 air raids against jihadists in Iraq and Syria.

Australia carried out its first bombing raid in Iraq, with a Super Hornet fighter jet dropping two bombs on an IS facility.

Alarm over the IS advance also boiled over elsewhere, with German police using batons, pepper spray and water cannons as Kurds and Yazidis clashed with radical Muslims in two northern cities in violence that injured at least 23 people.

More than 180,000 people have been killed in Syria since an uprising against President Bashar al-Assad’s regime began in 2011, morphing into a multi-front civil war that has drawn thousands of jihadists from overseas. — AFP