Malaysia’s mobile space: No 1 position up for grabs

KUALA LUMPUR, March 17 — Five years ago, if you had asked anyone who was the No 1 mobile operator in Malaysia’s telecommunications industry, they would have probably responded: “Why are you asking me that? It’s a no-brainer.”

Ask the same people the same question today, and the answer would likely be: “Well, it really depends what segments you are looking at.”

Finding a clear-cut leader in the industry these days is not as easy as it was before, as these telcos have emerged as champions in different sub-segments of the market, partly driven by the different marketing and product strategies they have adopted.

The recently released financial performances of the top three mobile operators clearly illustrate their unique strengths, and could be a hint that it could be a few years before the industry has a clear-cut winner again.

Clearly, Maxis is the leader as far as total revenue share is concerned, partly helped by its strong postpaid business as well as its Home Services business.

With a market share of 38.1 per cent, representing a lead of more than four percentage points above Celcom and its 33.7 per cent, it is unlikely that the industry will see a change at the top this year. However, expect the lead to continue to narrow this year, as rivals DiGi and Celcom are not far behind.

HwangDBS Vickers Research, in a market strategy report on March 4, highlighted that DiGi’s prospects to outperform the industry remains intact. One area it is expected to shine in is its mobile Internet business.

“Mobile data usage is expected to increase, particularly in the prepaid market, the primary growth market in the telecom sector. We believe DiGi also currently has the largest prepaid revenue market share amongst the three wireless operators, and we think it would be able to build on this,” said HwangDBS Vickers in the report. 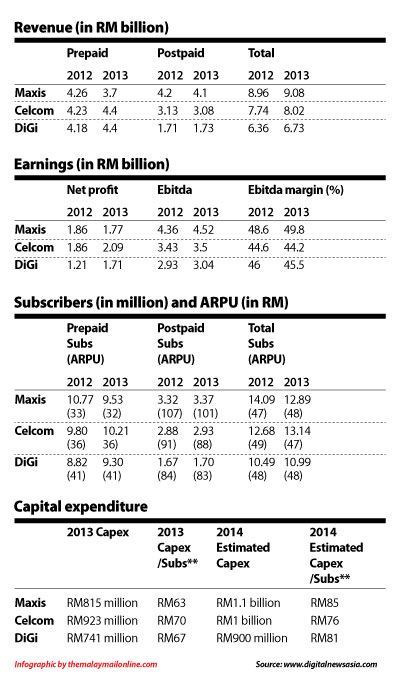 While data showed that Celcom edged Maxis in terms of the bottomline, it is important to note that Maxis’ net profit came after it took a RM143-million hit as a result of its version of a voluntary separation scheme, which it terms a career transition scheme (CTS).

It was also a year when its Home Services business continued to suffer losses, as the business is still relatively new and yet to hit critical mass.

DiGi’s net profit gained the most against its peers, by more than 40 per cent, mainly helped by the ‘last mile tax incentive’ it enjoyed during the year.

In terms of earnings before interest, tax, depreciation and amortisation (EBITDA), Maxis registered a 3.7 per cent growth to RM4.52 billion, putting it significantly ahead of its competitors.

Despite Celcom registering the lowest EBITDA margin amongst the big three, there is still a possibility that these margins could face further downside pressure.

“(The Axiata) management expects Celcom’s EBITDA margin to remain stable in 2014. However, we see potential downside risk to margins if Maxis spends more on marketing and turns up the competition, potentially prodding Celcom to respond in kind,” said RHB Investment Bank analyst Lim Tee Yang in a research report.

The research house forecasts Celcom’s EBITDA margin would remain stable at 44 per cent this year.

Maxis, in its presentation slides to investors, said that the churn was mainly from non-active and non-revenue generating Hotlink Youth Club SIM expiry and legacy plans.

Meanwhile, data revealed that it is almost equal in terms of blended average revenue per user (ARPU), whereby it ranges between RM46 and RM49. (Blended ARPU means how much an average customer spends every month.)

Last but not least is a look at the big three’s capex (capital expenditure).

While most mobile operators only highlight the absolute amount of their capex commitment, it is also vital to see how much does this translates to in a “per subscriber” basis.

A big bulk of the telcos’ capex will be spent on expanding their Third Generation (3G) and Long-Term Evolution (LTE) coverage, as they aim to capture the growing demand for wireless broadband and mobile Internet services.

What is interesting is that Maxis and DiGi, which invested RM815 million and RM741 million respectively on capex in 2013, are prepared to increase their capex spending by more than 20 per cent this year, while Celcom’s 2014 capex will increase by only 10 per cent (at best).

After years of very little movement, the next few years may bring a fresh face to Malaysia’s mobile telecommunications arena. — DNA