Kobe’s midfielder Andres Iniesta (left) is marked by SIPG’s midfielder Aaron Mooy during the AFC Champions League round of 16, December 7, 2020 at the Khalifa International Stadium, Doha. — AFP pic
Follow us on Instagram, subscribe to our Telegram channel and browser alerts for the latest news you need to know. 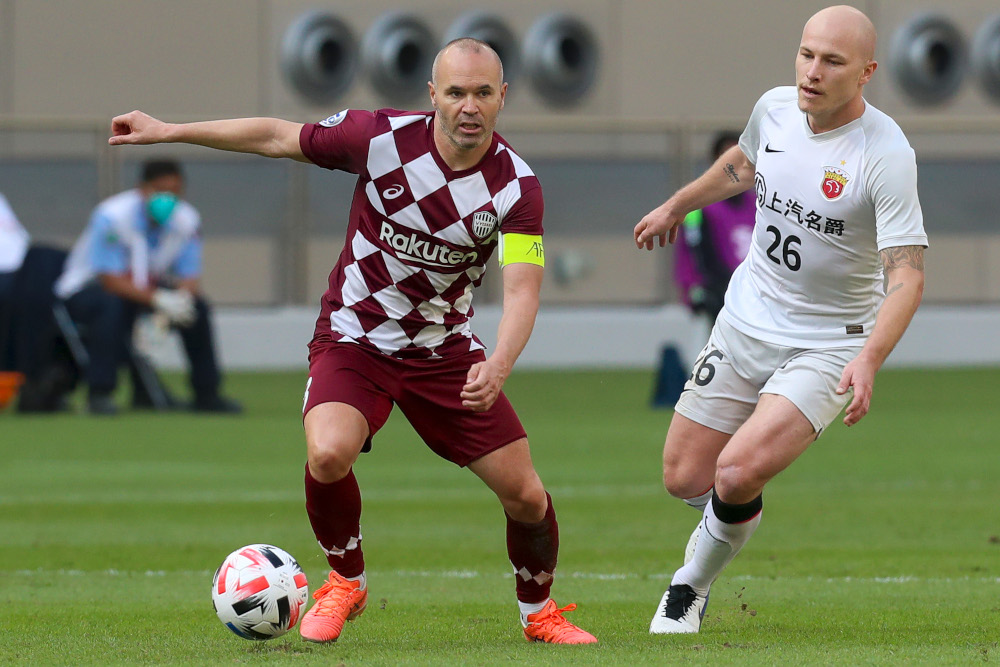 Kobe’s midfielder Andres Iniesta (left) is marked by SIPG’s midfielder Aaron Mooy during the AFC Champions League round of 16 football match between Japan’s Vissel Kobe and China’s Shanghai SIPG December 7, 2020 at the Khalifa International Stadium in the Qatari capital of Doha. — AFP pic

DOHA, Dec 7 — Andres Iniesta and Daigo Nishi struck either side of the break as Vissel Kobe edged out Shanghai SIPG 2-0 to reach the quarter-finals of the Asian Champions League today.

The Japanese side flew to Doha with mixed feelings, having broken new ground in the domestic top flight by winning the Emperor’s Cup and the Super Cup early in the year but also suffering five straight morale-shattering defeats in the J1 league in November.

But they would have much to look forward to after today’s spirited show put them just three wins short of the continental title, a possibility they wouldn’t have probably given much thought to when they set out for their very first appearance in the competition.

“We are very happy that we played very well and the players stuck to the instructions. This victory is not just for us, but for all the fans back in Japan who sent us their messages of support,” said Vissel Kobe coach Atsuhiro Miura.

The only thing he was worried about was the possibility of Iniesta missing the next match after he had to substituted in the 65th minute with a thigh injury.

“We have a problem with Andres Iniesta’s injury. We have to wait and see how serious the injury is,” added Miura.

Vissel Kobe lagged marginally when it came to ball possession but were more incisive with their forays keeping the Shanghai SIPG defence busy for long spells of time.

Spain and Barcelona legend Iniesta, who had scored his first goal in the tournament to help Vissel Kobe reach the round of 16 with a 3-1 win over Guangzhou Evergrande on November 25, was again in his element today.

But Wei couldn’t come to his team’s rescue in the 31th minute when Iniesta pounced on a perfect pass from Hotaru Yamaguchi just outside the box and dribbled his way up before placing a low drive between three defenders, the ball streaking under the keeper’s body and into the goal.

Shanghai SIPG had a fine chance to draw level five minutes later from a free-kick but Oscar’s shot from just outside the box went marginally wide to the left.

Vissel Kobe doubled their advantage five minutes after the break, Nishi lunging forward to make contact with a Kyogo Furuhashi cross from the left and leaving Chen flummoxed.

Iniesta had another dash at the goal from 35 yards in the 65th minute before he was substituted.

“Today my players were trying their best but it was all too slow because it is impossible to do it with this physical condition,” he said.

“They did not have the energy to continue playing at the same level. This is not our normal game because we couldn’t play in our preferred style.

“It is impossible to play seven games in 21 days and keep going at the same level.” — AFP

‘This is my style’: Cucurella refuses to cut his locks after Romero’s hair grab

Injured Monfils ruled out of US Open