Malaysia tops medals board at SEA Games with four gold

KUALA LUMPUR, Aug 17 — Malaysia overtook Indonesia to top the medals board, picking up three gold today from archery and synchronised swimming to raise their overall tally to four as the 29th SEA Games readies for its official opening on Saturday.

The national archery squad returned to grab the men’s and women’s team compound titles to make up for their stumbling start overnight. The hosts are now the team to watch in the last compound event tomorrow when they defend the mixed team title won by Fatin Nurfatehah Mat Salleh and Mohd Juwaidi Mazuki in Singapore.

The duo who anchored the team competitions will again pair up for the mixed team in which they will start the quarterfinals shoot against Singapore’s Ang Han Teng and Madeleine Ong Xue Li.

Gan Hua Wei, 18, became the proud owner of a gold by a whisker in the synchronised swimming solo technical routine, thwarting fierce competition from Singapore which took the silver and bronze.

Laos lodged a protest over their 148-149 loss to Myanmar for the gold in the non-repetition secondary event but were overruled, giving Myanmar their second gold from the chinlone competition which came to a close.

Fatin was greatly relieved following Malaysia’s nail-biting showdown against Vietnam which ended 253-252 with teammates Nurul Syazhera Mohd Asmi and Saritha Cham Nong to retain the gold. They beat Thailand 227-219 in the semifinals.

“I only thought of what the coach had told us and the support from my team mates,” said Fatin who had promised to make amends after ending up with the bronze in her bid to defend the women’s individual gold yesterday

Mohd Juwaidi, who missed the men’s individual gold by a point yesterday, said the team felt slightly nervous under the tensed atmosphere during the competition at the Synthetic Turf arena in Bukit Jalil. Malaysia beat Laos in the quarterfinals and Vietnam in the semifinals.

With two gold each, Indonesia and Myanmar trail Malaysia in the overall standing while Thailand and Singapore have also picked up their first gold.

Tomorrow, four more will be contested. In addition to the archery mixed team compound final, synchronised swimming duet technical and 10km open swimming for men and women will take place.

Zylane, the most experienced in the national squad, will team up with Gan in the synchronised duet event. In Singapore, Zylane and now retired Katrina Ann Abdul Hadi won the gold in the joint duet technical and free routine, which is contested separately here.

The 10km open swimming marks the return of Malaysia’s Heidi Gan who was winner of the event last held in 2011 in Indonesia. The two-time Olympian based in Australia got a boost from winning the 10km event in the Asian Open swim at the same competition venue in Putrajaya in May this year. — Bernama 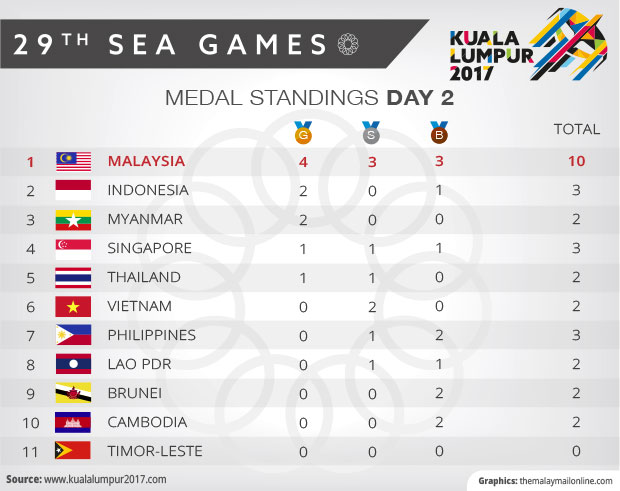