Food-and-beverage (F&B) operators told of the troubles they are facing with the ongoing manpower crunch. — TODAY pic
Follow us on Instagram, subscribe to our Telegram channel and browser alerts for the latest news you need to know.

SINGAPORE, April 8 — Jeremy Cheok has just two requirements for anyone willing to work in the restaurant he founded: Two hands and two legs. Age, he said, is not a factor.

Yet, he continues to find it tough to hire workers, with even “a couple of old people” who walk by to enquire about job vacancies not showing up on the day they were supposed to be interviewed, he added.

“They just ghosted us.”

The recruitment experience of Cheok is not unique at all and it is becoming far more widespread than before.

Several other food-and-beverage (F&B) operators told of the troubles they are facing with the ongoing manpower crunch. It is yet another hurdle to overcome after they have been pummelled by the Covid-19 pandemic over the past two years.

The Restaurant Association of Singapore is appealing to the Government to review its policy on foreign manpower.

“(We) must make this one respectful request to the Ministry of Manpower: That it is time to relook the current foreign worker policy for the F&B sector to be granted a different foreign worker quota from the overall services sector,” it said in a statement sent to TODAY, calling for “differentiated sectorial manpower policies” for the industry.

“Services sector employees are in high demand and competition for them across all segments of the services sector has resulted in spiralling wages, beyond the reach of many in the F&B industry.”

It noted that during the Covid-19 pandemic and with border closures, wages had already gone up on the average by 15 to 20 per cent over the last two years.

However, the manpower crunch persists and is further aggravated by Singaporeans shunning work in the front- and back-of-house operations at F&B outlets.

This is more pronounced with growing affluence and higher educational qualifications of the younger generation, it added.

“While the industry will no doubt need to continue its efforts to transform and innovate for better efficiency, for better employment of resources and to attract talent, the fact remains that the acute manpower shortage needs to be addressed at a national level.”

The association has more than 500 members representing close to 800 brands operating in more than 5,000 outlets.

To give some sense of how the lack of workers affects a business, Cheok the restaurant founder said that even though Covid-19-related restrictions for dining have eased since late last month and alcohol sales and consumption are allowed to go on beyond 10.30pm, he is unable to keep his operations running beyond that time.

The founder and co-owner of Slake — which is a 100-seater restaurant located near Boat Quay — has been working with just 45 per cent of his usual team, which includes five service crew members.

It is not just harder to keep up with the increased number of patrons, it is also “physically not possible” to ask the employees to work beyond 10.30pm when they start work at 10am, he added.

In the latest annual job vacancy report by the Ministry of Manpower (MOM), being a waiter is among the top five job roles — outside of those for professionals, managers, executives and technicians — that would not be taken for at least six months.

Employers told TODAY that it also applies to back-of-house staff members such as cooks and dishwashers. 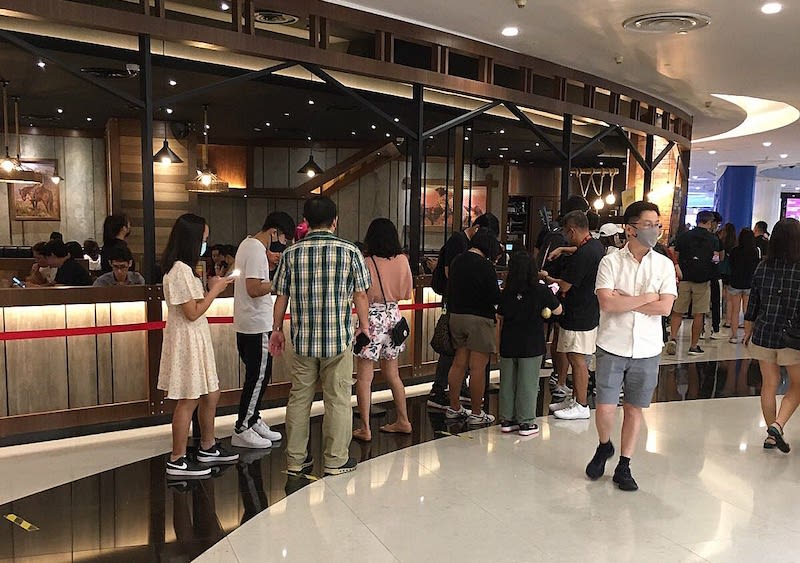 A queue of people waiting to be seated at a restaurant in VivoCity mall. — TODAY pic

The report stated that workers were commonly deterred by the physically strenuous nature of these jobs, unattractive pay and non-conducive working environment.

Some employers, such as Nasen Thiagarajan, chief executive officer of the Harry’s chain of bars and president of the Singapore Nightlife Business Association, have even tried dangling higher salaries for both part-time and full time candidates — but to no avail.

Aside from the discouragingly low number of job applicants, there is another concern: The poaching of workers from other F&B businesses.

Just like the part-timers, the full-time staff members have seen their monthly salaries go up by 15 per cent, compared to pre-pandemic days.

This is to get them to stay, Thiagarajan said, adding that the company also throws in five-day work weeks and annual rewards.

“But after you have increased salaries, the existing guys are still being poached by neighbouring operators offering 30 per cent more salary, because everyone is desperate,” he revealed.

“Now, we end up killing each other because there’s no new staff.”

He believes that the rate for part-time service workers may soon rise to as high as S$25 an hour within a year.

Over on Tyrwhitt Road in Jalan Besar, the Chye Seng Huat Hardware cafe is fighting dismally against the pull of more “lucrative” jobs being offered to students, who are the cafe’s traditional source of part-time workers.

These students are now more interested in being safe distancing ambassadors or manning SafeEntry counters for the contact-tracing digital system that malls and eateries still use during the pandemic.

Marcus Foo, chief executive officer of PPP Coffee, a company that manages the cafe, said that he has raised hourly wages to the double digits as well, but it is hard to compete with the above two job roles that pay equally or more.

A check on the Indeed job site online showed that some safe distancing ambassadors are being offered between S$2,000 and S$3,000 a month, or S$12 an hour. The rate for a SafeEntry scanning personnel was listed as S$8 an hour.

Foo said: “If you think about it, if an F&B (job) pays you maybe S$8 an hour, but you have another option of sitting down with your phone watching YouTube videos, checking people at the SafeEntry counter…and if you’re doing a holiday job for six months, which would you pick?”

Even if the physically demanding nature of being a service crew at an F&B outlet could be overlooked by people who take up the higher-paid job, it would not be long before customers feel the trickle-down effect.

Foo disclosed that his daily revenues have risen by 10 to 15 per cent with more customers returning on-site, but with operating costs such as the costs of coffee and electricity prices rising by as much as 20 per cent, the business is just breaking even.

Making another observation, Cheok from Slake restaurant said that it is no longer just about the pay for some jobseekers, but work-life balance.

“Not many people want to stick to this job. It is labour-intensive, the hours are unattractive and when people are celebrating, you’re working,” he added.

Linda Teo, country manager for recruitment agency ManpowerGroup Singapore, said that most F&B jobs are rank-and-file roles that do not require specialised skills.

That is why employers have to compete with other sectors such as those handling events, telecommunication and logistics for the same target pool of workers.

Women and older workers, where are they?

Following MOM’s briefing on job vacancies last Thursday, Minister of Manpower Tan See Leng said that there are other ways to expand the resident workforce.

One way is for employers to tap some 260,000 women “who are not back in the workforce, but who are capable of doing so”.

The other is through the hiring of older workers, of which there are another 120,000.

Of the four employers TODAY interviewed, all said that they are not averse to the idea and will gladly take on these groups of potential workers.

The only question asked was: Where are they?

Still, Foo from PPP Coffee doubts that it will make a difference because the company seldom sees “housewives and retirees” apply for a job with it.

“The truth is, the F&B field is their last option. Long hours, on your feet, (working) weekends. Some may think there’s a high risk of getting Covid,” Foo added.

He also believes that older workers may eschew getting a job if it means reducing their chances of getting infected by the coronavirus.

And if they do join, Thiagarajan from Harry’s is concerned that they may not want to work during the peak periods, which could lead to a situation where he has excess manpower during hours when they are not needed.

“We can’t tell the retirees or the housewives, don’t spend the weekends with your children, right?”

The employers were asked if the reopening of borders would help ease their predicament.

In short, they said no. Simply because, without the Singaporean core of workers, they will not be able to get the quota they need to hire foreign workers as mandated by the Government’s policies.

And even if they had the quota, they have not seen a surge in Malaysians seeking jobs yet.

It is not as if Singapore lacks a suitable pool of people, Thiagarajan pointed out. 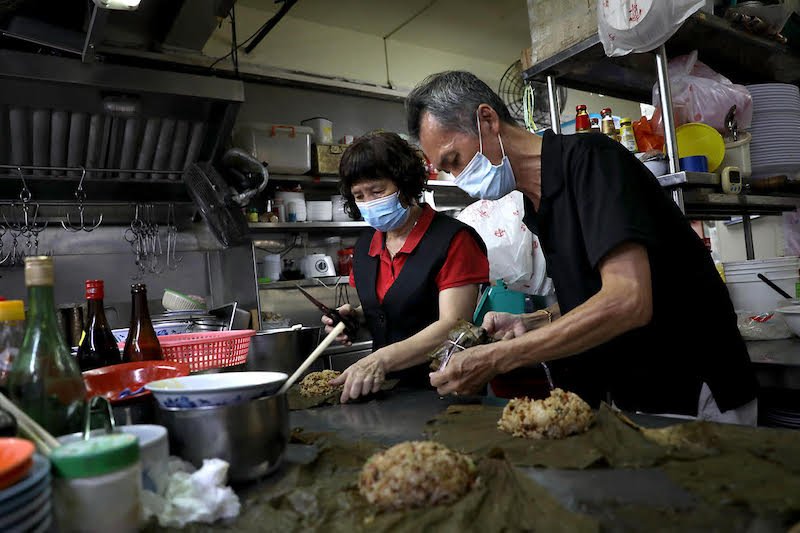 If the authorities were to relax the rules regarding the hiring of long-term visit pass-holders — who could be the spouses of Singaporeans — or foreign students, he said that it might help.

“They are able-bodied and they want to work. You have to… (look) at the resources that are here before looking across the border,” Thiagarajan said.

Alternatively, he said landlords could afford to give more leeway in terms of letting F&B operators adjust their opening hours so that they may reallocate employees to the shifts where they are needed the most.

For instance, Thiagarajan said that lunchtime is typically quiet and he would like to open his bars later when there are more customers.

However, tenancy agreements dictate operational hours, so he is unable to do this and is thus unable to reallocate his staff members optimally.

Otherwise, as Keng Eng Kee Seafood restaurant owner Paul Liew suggested, F&B operators may have to consider scaling down their operations if necessary.

Whatever the case, Thiagarajan said that F&B operators feel as though there is “no light at the end of the tunnel” despite whatever solutions the Government offers.

The authorities need to have talks with the trade associations to rebuild a policy that is sustainable for the industry — a process he said could take up to five years.

“But if we don’t start now…what’s the solution going to be?” Thiagarajan said. “My only solution, for now, is to be nimble and try to figure out whether any attention is going to come to this dire situation.” — TODAY

Study: Singaporeans who spend over three hours daily on TikTok, Instagram most at risk of body image anxiety