OCT 15 — It was as amusing as it was predictable. The Malaysian Chess Federation (MCF) did not hold its Annual General Meeting — as it said it would — again.

This, of course, simply means the incumbents will be clinging on for a few more months.

Only MCF can explain how they could do this so easily (and again) after announcing the elections will be held on Oct 10. In fact, the elections were originally slated to be held earlier this year.

While it is clear the opposition has been blindsided, I would not be surprised if serious objections have not been filed, a complaint made to the various regulatory authorities and legal action taken.

Yes, in the end, all those interested and in a position to do something are ultimately one big happy family... 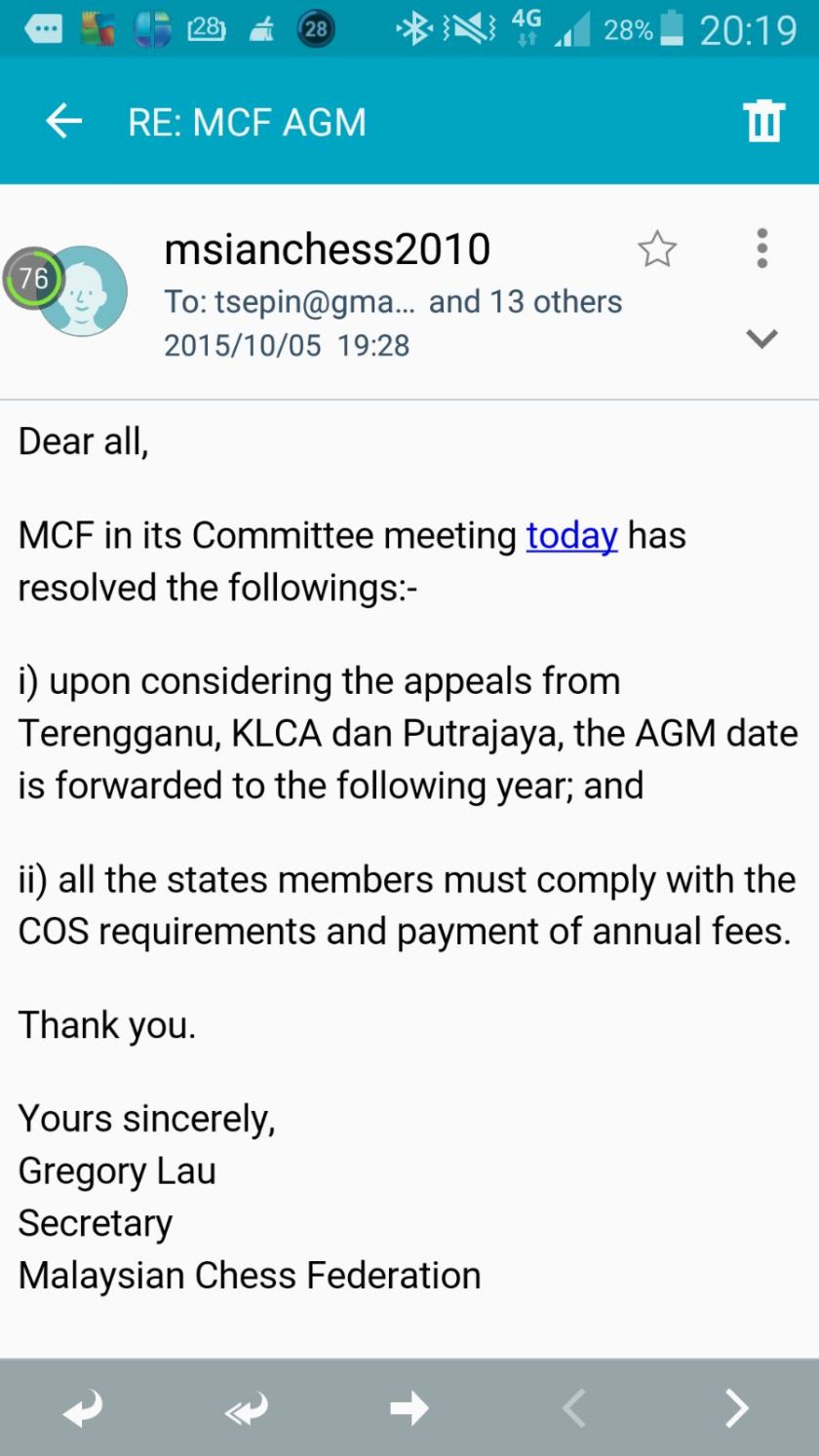 MCF has long had a habit of twisting facts to suit its agenda and any communication in writing is naturally rare.

In the email above — not even a letter — the protests against the illegal actions of the sad organisation that purports to lead and develop chess in Malaysia have been dismissed as appeals and deemed as sufficient reason to "forward" the AGM to dates unknown next year.

Laughable is the reminder to comply with COS (Commissioner of Sports) requirements and to pay annual fees since it is MCF that repeatedly manages not to comply. Everyone knows how hard it is to pay even a token membership fee when not invoiced and attempts to make payments are ignored.

Last weekend, the Asean Chess Confederation (ACC) had its board meeting in Manila and when reading the minutes, it hit me that a few things concerned Malaysia.

Like everybody else in the local chess community, I have often asked why the non-chess playing Tan Sri Ramli Ngah Talib would want to be MCF President and how he could remain there year after year without raising a sen, let alone doing anything for the game.

The minutes of the ACC Board Meeting stated that the ACC Treasurer General (who happens to also be the treasurer of the MCF) resigned two days before it took place which means there is no longer a representative from Malaysia.

We now join Brunei which has not been engaged for some years now and Cambodia and Laos which are still finding it hard to even field players.

What shocked me was the fact that the proposed Asean Championships and the Asean Young Masters Cup — two new events that could arguably have the same impact as the Asean+ Age group championships for the development of chess in the region — are now being held in Indonesia.

I found out last week that the Johor Chess Association had secured sponsorship for these inaugural events which would have been held after the Johor Open Championships from December 14-19, 2015 but it seems that MCF was making excuses about registering the events with FIDE, the excuse being it was too short a notice even if only a 30-day lead time was needed by FIDE.

Yet, Indonesia did not find it at all difficult to register the same events with FIDE.

The Asean Championships is going to be for players having a minimum rating of 2300 which ensures its prestige and being regarded as an elite regional event that will showcase the best of Asean to the world and yes, we do have top talents like Nicholas Chan, Yeoh Li Tian, Aron Teh and Mas Hafizuhelmi who qualify and now even if they are invited, it will not be at home but overseas.

Worst, the Asean Young Masters Cup is meant to address the lack of opportunities for young talent in the region to get grandmaster and international master title norms and now with its move to Indonesia, Malaysia has lost its wild card slots and will have no representation.

So tell me, does MCF today exist just to ensure there is no progress? It's bad enough they do nothing but it really is something else when they destroy whatever others try to do for Malaysian chess.