The night New Year was cancelled

JAN 1 — There was a poignant moment last night when a massive group of youths protesting against price hikes took over a concert and practically caused a New Year celebration to get cancelled.

The concert was abruptly ended half an hour before midnight, and as the clock struck 12, there was no countdown to be heard, no ringing from the over 117-year-old clock tower of Sultan Abdul Samad building, and no fireworks to illuminate the night.

2014 came and the crowd stayed quiet, nobody was feeling merry.

In a way, the group made its point: 2014 is “the year people suffer” from price and rate hikes, it claimed. There is nothing to be happy about the New Year. 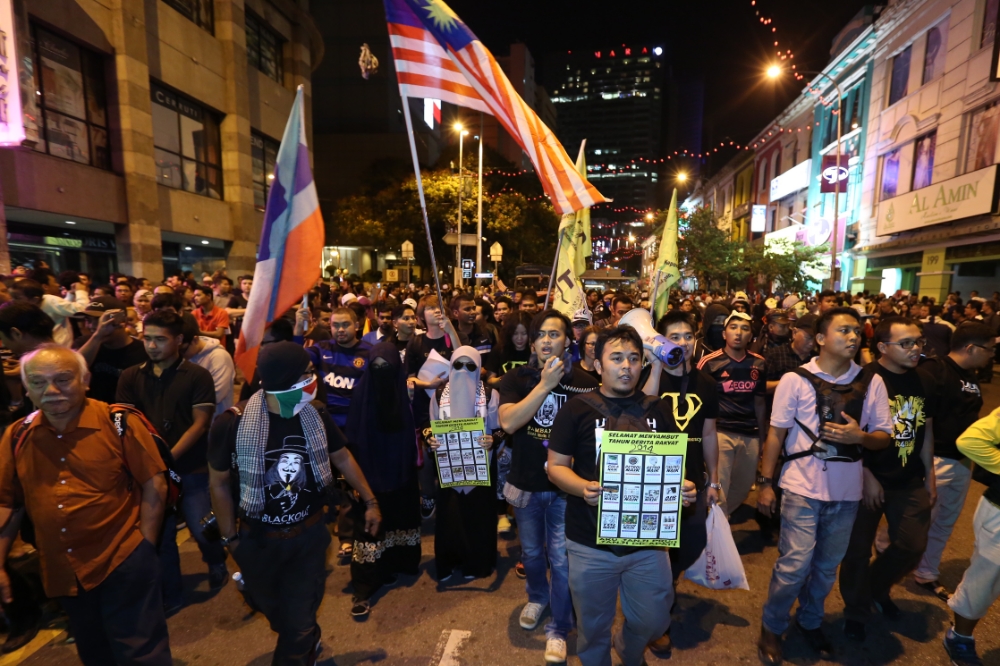 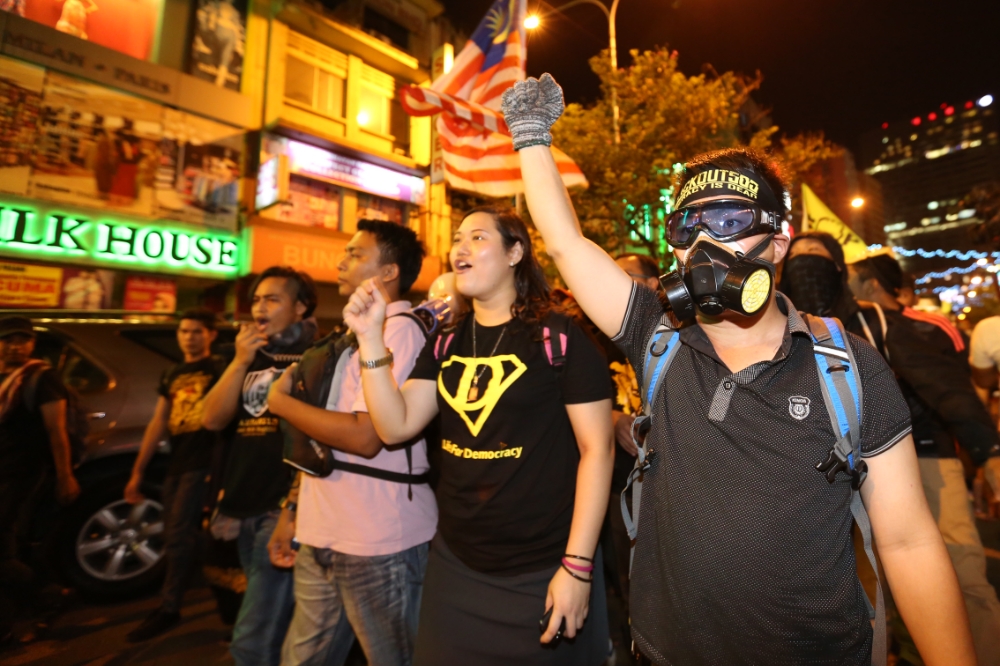 A man seen wearing a gas mask marches towards Dataran Merdeka together with other rally participants holding the Malaysian flag, December 31, 2013. — Picture by Saw Siow Feng 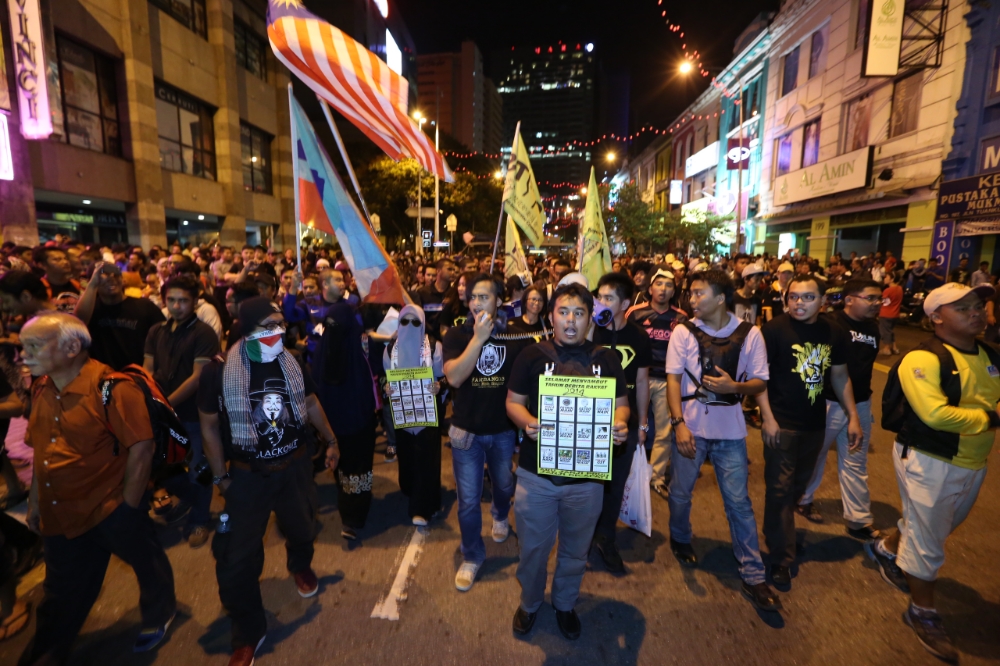 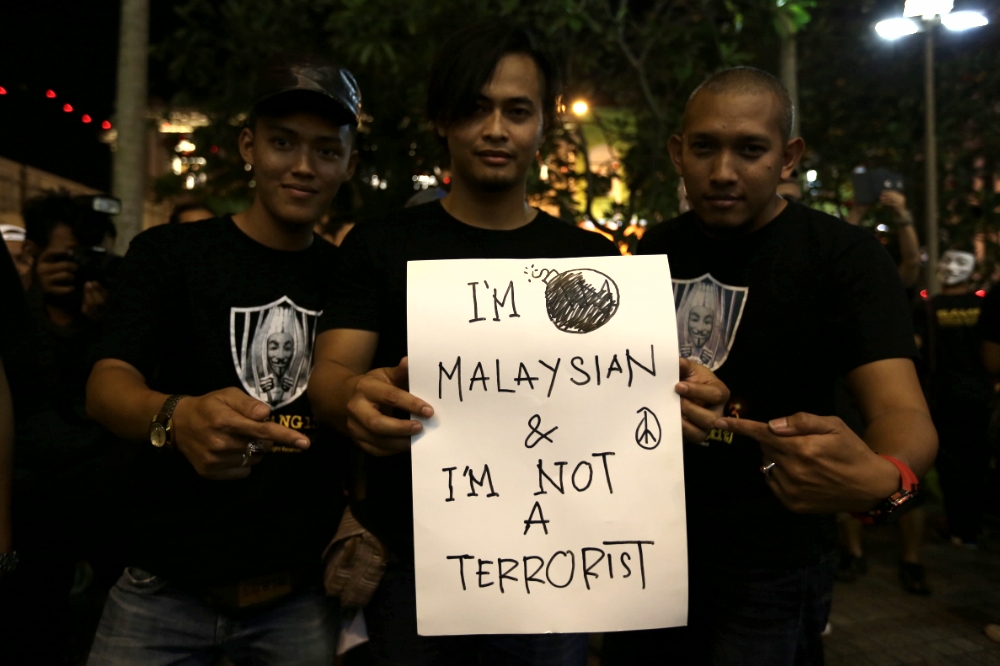 Malaysians holding up a banner with "I'm Malaysian and not a terrorist" in Kuala Lumpur, December 31, 2013. — Picture by Saw Siow Feng 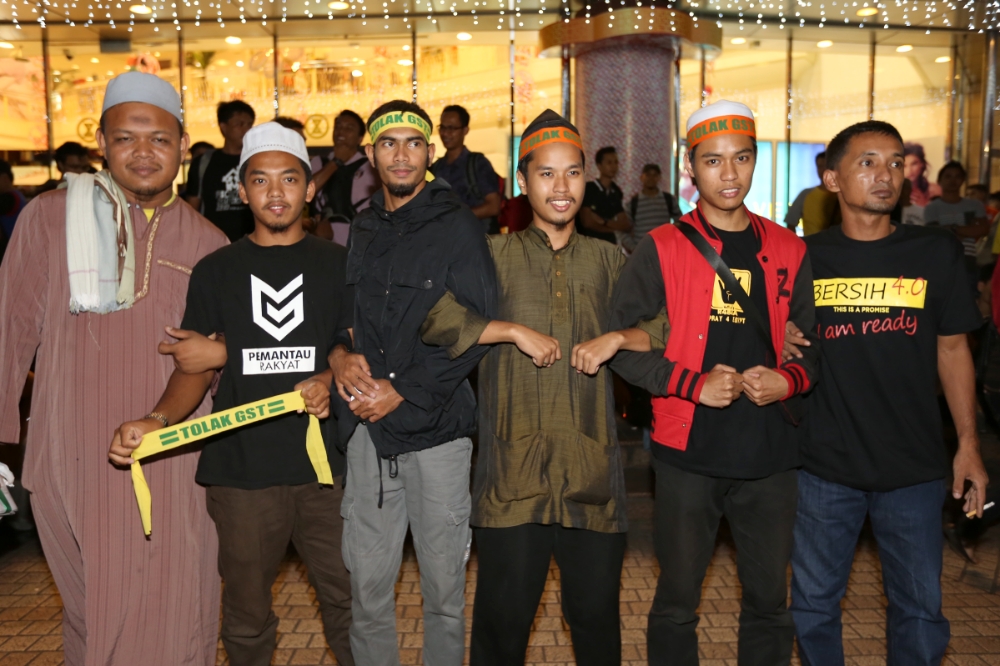 Participants posing for pictures at one of the meeting points for the Turun Rally demonstration at Dataran Merdeka, December 31, 2013. — Picture by Saw Siow Feng 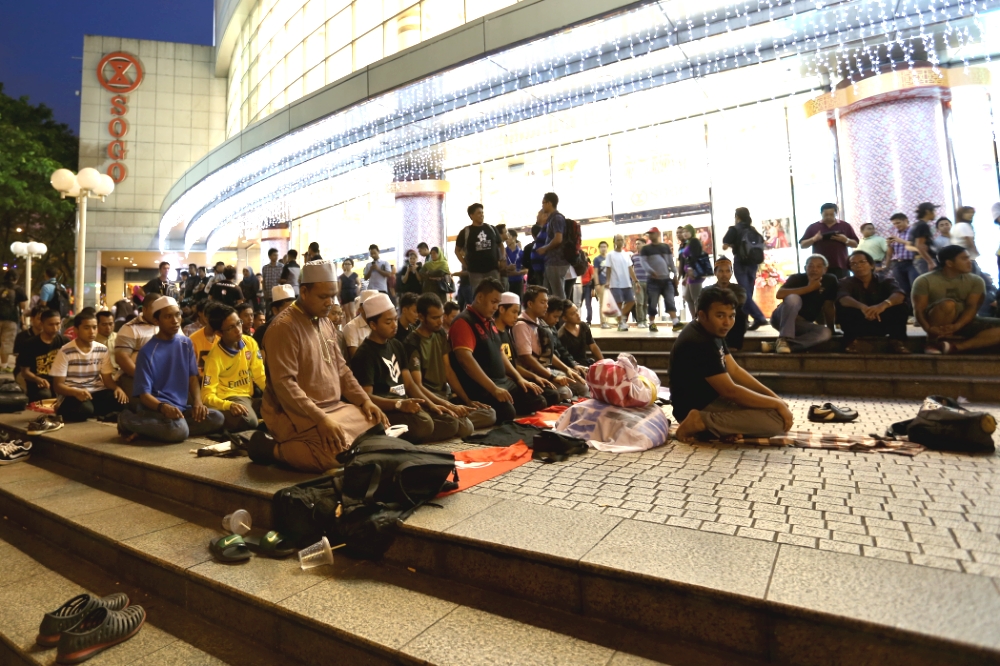 Men seen congregating at one of the meeting points for the Turun Rally demonstration at Dataran Merdeka, December 31, 2013. — Picture by Saw Siow Feng 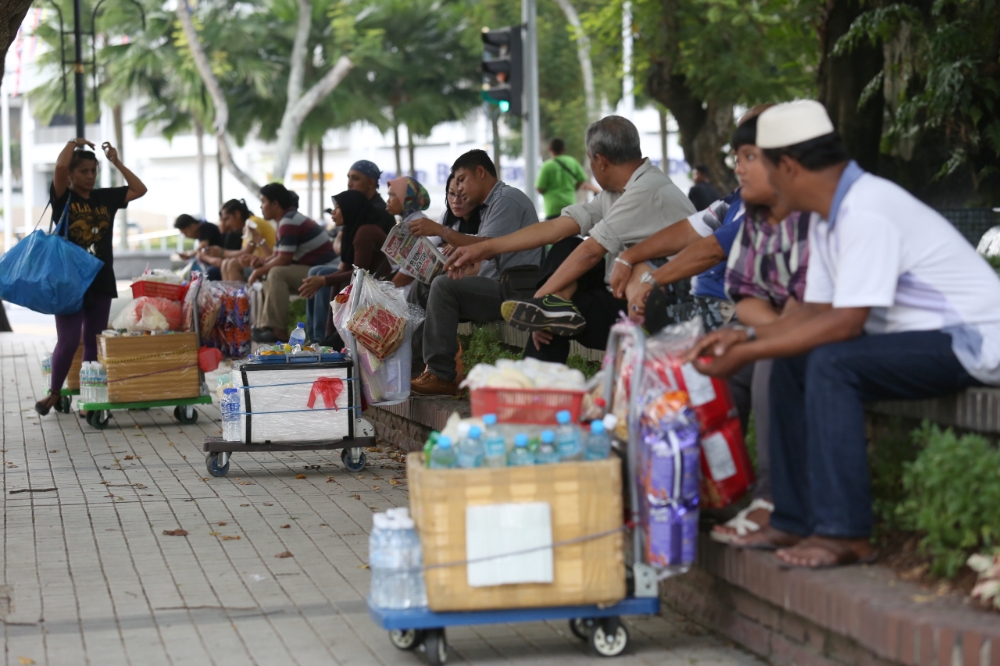 People seen congregating at one of the meeting points for the Turun Rally demonstration at Dataran Merdeka, December 31, 2013. — Picture by Saw Siow Feng 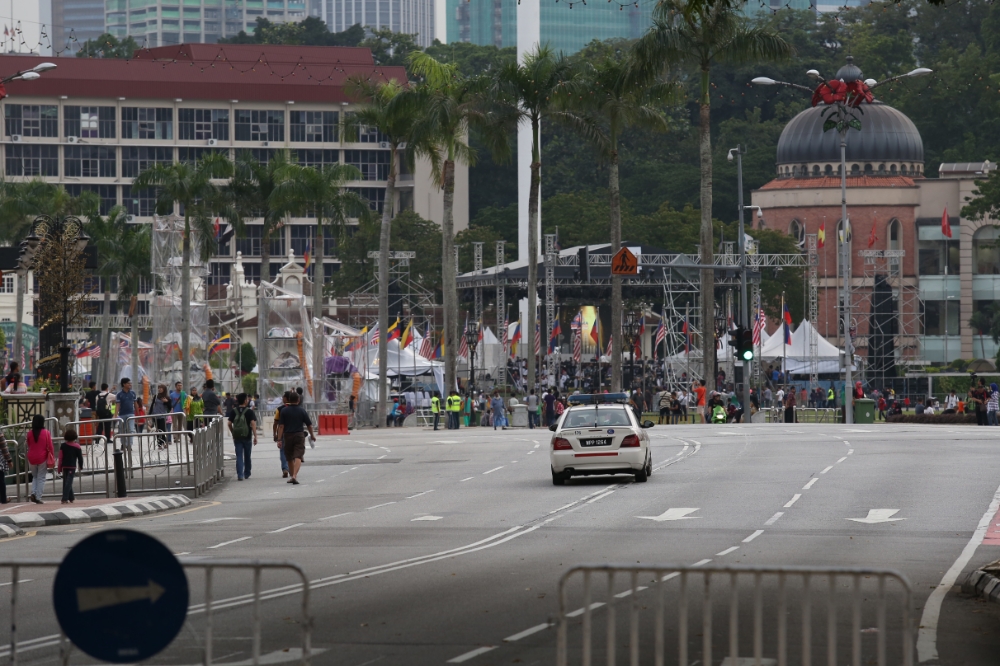 A police car spotted at one of the meeting points for the Turun Rally demonstration at Dataran Merdeka, December 31, 2013. — Picture by Saw Siow Feng 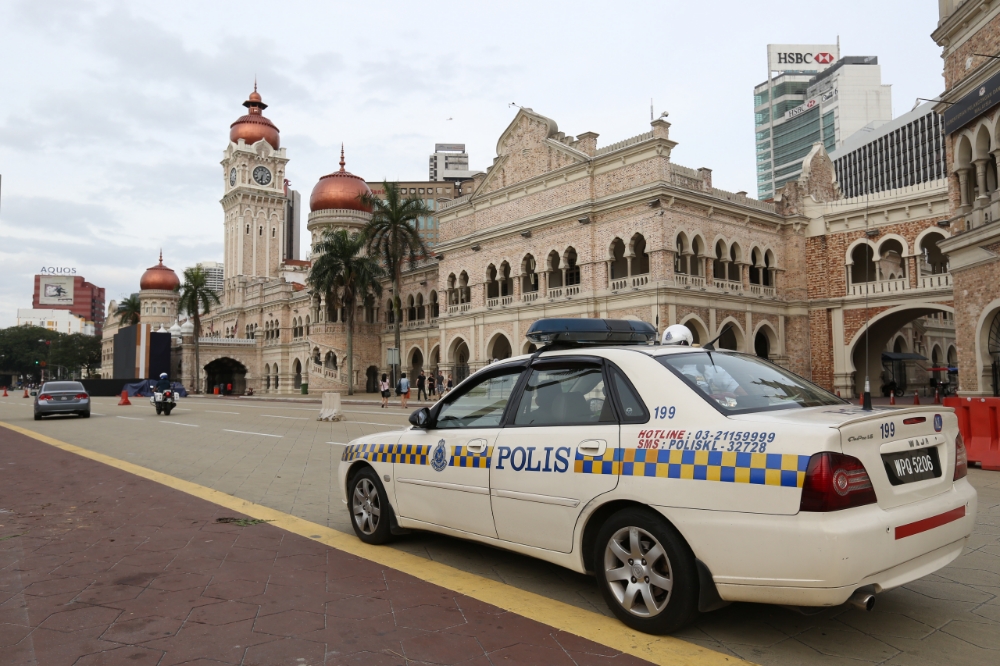 A police car spotted at one of the meeting points for the Turun Rally demonstration at Dataran Merdeka, December 31, 2013. — Picture by Saw Siow Feng

There was another poignant moment, when nearly 15 minutes after the concert was cancelled and the crowd went quiet, Kuala Lumpur mayor Ahmad Phesal Talib went on the stage to try and fix the situation.

Considering City Hall was just embroiled in a controversial revaluation for property tax just a few weeks ago — one of the many things the rally was against — one would say they could have certainly picked a better spokesman.

The events of the past few months have shown that Kuala Lumpur folks are becoming more disenchanted with a mayor whom they did not vote for, nor find relatable.

Amid the already hostile attitude towards him, the mayor had decided to greet the protesters with the “Salam 1Malaysia” greeting which had been widely panned by everybody except the most hardcore of civil servants.

You can imagine how the crowd reacted.

To add salt to the wound, the mayor did not only fail to address the protesters and the reason why they held it, but he also chastised them by advising them to not cause more trouble.

Suffice to say, he was not met with a friendly cheer.

The objective of the rally had been made very clear from the beginning by its organisers: to protest against a number of price and rate hikes, and the spiralling cost of living.

Putrajaya’s reaction towards the legitimate complaint could not be more opposite from what the organisers had expected.

Not only did the government make light of the cause, but there was also a concerted effort by authorities to paint the rally as a move to allegedly overthrow the government.

In the days leading towards December 31, Barisan Nasional (BN) politicians had demonised the student organisers as troublemakers bent on causing chaos during the night.

The police had also treated the rally as such, while entertaining baseless accusations that there will be weapons and explosives involved in it.

State news agency Bernama went one step further yesterday by describing the rally on Twitter with the hashtags #Guling and #Topple, despite other media using the official #Turun as suggested by the organisers.

The Dataran Merdeka rally last night did start out in line with its objective, but as night wore on, it was clear that the protesters were in fact asking for the government to step down (as opposed to toppling it by themselves).

There was obvious deep-rooted anger towards the government, BN, its component party Umno, and Prime Minister Najib Razak.

As the protest ended way past midnight, Najib still held Putrajaya and no government was toppled, but the message here is clear for all lawmakers:

It is never wise to ignore the anger of the people, and even less wise to stoke the fire by making fun of their frustrations.

Which was exactly what the government was doing with its ministers making insensitive remarks asking the public to “change their lifestyle”, with ridiculous leakages and wastage documented in the Auditor-General’s Report, and the blatant lifestyle of excess enjoyed by many in power.

Ahead of the protest, Najib announced 11 steps to cut down Putrajaya’s spending, but it proved to be too little too late, as shown by the turnout last night: close to 5,000 strong.

Perhaps there is another lesson here for activists: that the issues most dear to the people and capable of spurring massive turnouts are about civil liberties and bread-and-butter issues.

BERSIH rallies were about clean and fair elections, Blackout was about electoral integrity, and KL112 was embraced by many for its wide-ranging causes from free education to heritage to environment to personal freedom.

And Turun was about the falling value of money in our wallets, and just like the others they attracted people from all walks of life.

They were certainly not against human rights and their defenders, since it is the same human rights that guarantee the freedom for Malaysians to assemble.

When the clock finally struck last night, it was already half past midnight, and the students clad in black celebrated their victory, even if it was at the expense of thousands of other people.

These were an angry group of people, and if they had never become angry in the first place none of this would have happened.

If 2014 is not “the year people suffer”, New Year would have come to Dataran Merdeka, and the people would have been merry.