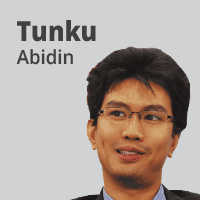 JULY 19 — Regular readers will be familiar with my lament at the woeful state of education of history in our country, in particular, the need for the inculcation of a shared (but contestable) national history, the importance of that history in framing a common understanding of citizenship, and putting this narrative in a wider geopolitical context.

It’s not just me: students who I meet at innumerable forums tell me that their history textbooks (and the inane methods of learning) are more likely to induce catatonia than an appreciation of our past; retired soldiers who I meet at war memorials and regimental dinners forlornly remark that important battles of a generation ago are completely forgotten; and retired bureaucrats, senior judges and politicians of the “old school” I have the pleasure to know are resigned to the fact that their heroes — King Ghaz, Tun Suffian, Dr Mohamed Said — will never be household names again.

As for those names which every Malaysian does know, it can be argued that they are simply put on pedestals without sufficient appreciation of their life stories.  Ironically, there are many excellent biographies, autobiographies and collections of the writings of our early patriots (the books of Tunku Abdul Rahman could constitute a whole course!), but they don’t seem to be used as teaching materials.

It is only in particular places that a strong institutional memory survives: our fiercely proud historic schools, or families and clans organised enough to hold events to connect young members with their old.

I’ve observed the traditions of a Cantonese kongsi and witnessed a reunion of Jaffna Tamils apart from joining hundreds of my own blood relatives, and a curiosity about ancestors triggers the viewing of the same periods of history through different but equally fascinating viewpoints.

So when I read that Islamic Civilisation and Asian Civilisation Studies (TITAS) is to be made compulsory at private universities, I had mixed feelings. Of course, it is important for people everywhere to have an understanding of these profoundly important civilisations, but it is not as simple as that.

First, we have to consider the course content. I spoke to some students and had a look at some of the materials: lots of dates and names and some introductions into the theories of major thinkers — but there could be more.

There were no case studies drawn from the enormous time period and geographical space available that would engender critical thinking — there could easily be an introduction to the story of Muslim philosophy from Ibn Sina to Al-Ghazali to Ibn Rushd, for example.

On a happier note though, I saw nothing that promoted a political party or any assertion that one civilisation was superior to another.

Of course, this is a vast subject area and major omissions are inevitable, which begs the question as to why this is all being crammed into a single course.  A more holistic approach would be to spread the material throughout and earlier in the student experience.

Indeed, asking university students who are intent on specialising in particular fields to do an additional, unrelated course may be academically detrimental to their core subject. Except they would not be asked, they would be forced — which leads to the point on academic autonomy. Regardless of the merits of the course, it should surely be up to universities and their students to determine the make-up of their degrees.

Finally there are the cost and logistical implications of universities having to allocate hitherto unbudgeted time, space and teachers for this imposition.

This point about autonomy came up quite frequently at the inaugural meeting last week of the University of Malaya Research Advisory Council, of which, I agreed to be a member alongside academics, sector specialists from government agencies and corporate figures.

The council is a commendable initiative of the Deputy Vice Chancellor for Research and Innovation, who explained that the Vice Chancellor is very keen for UM to (once again) become one of the world’s top 100 universities.

Strengthening research capacity is central to this, and so the discussion centred upon how to link the university’s research to the demands of industry.

The theory is that this will make UM’s research more relevant and responsive to the nation’s economic interests.

Sitting next to Professor Terence Gomez, I interjected, saying that while I had nothing against applied research, the university should prioritise pure research and seek academic freedom for itself and its competitor universities, without which all talk of strengthening research capacity is hollow.

That might attract some of our best historians and social scientists, currently based in the UK, Europe, the USA and Singapore to return and set off a beautiful chain reaction in the rest of our academic environment.