Vancouver, British Columbia - Newsfile Corp. - September 22, 2022 - Viscount Mining Corp. (TSXV: VML) (OTCQX: VLMGF) ("Viscount" or "the Company") is pleased to announce our results of our Titan MT survey on Passiflora in Silver Cliff, Colorado.
During the early summer of 2022, Viscount contracted Quantec Geoscience to perform a five-line TITAN MT survey over the Silver Cliff caldera of the Passiflora target. Quantec is authorized by the Association of Professional Geoscientists of Ontario (PGO) and has acquired many reputable clients such as Newmont Mining, Barrick Gold, Agnico - Eagle Mining, De Beers Consolidated Mines Limited and the Nevada Department of Energy to name a few. The purpose of the survey was to identify conductive areas below the survey surface which could represent metal deposits, or perhaps the presence of a porphyry. As shown by Figure 1 below, each of the five, parallel lines surveyed by Quantec Geoscience were 2.2 kilometers (1.36 miles) in length and separated by 175 meters (574 feet). 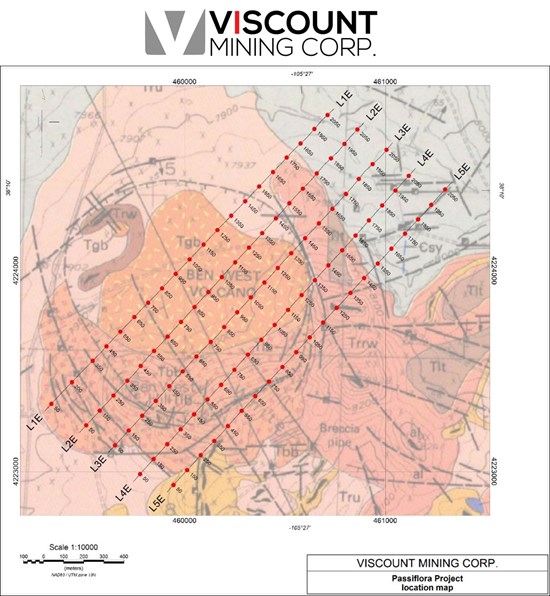 Figure 1. An aerial image showing locations of the five TITAN MT survey lines positioned over the Silver Cliff caldera.
To view an enhanced version of Figure 1, please visit:
https://images.newsfilecorp.com/files/2736/138093_39bab23f54aafb7a_002full.jpg
Ground-penetrating resistivity data gathered overnight from each of the survey lines was analyzed and converted by Quantec-employed qualified professionals into cross sections. In their executive summary, Quantec Geoscience describes their findings, saying: "The TITAN MT survey identified a zone of extremely low resistivity in the Silver Cliff caldera. The main anomaly is bowl-shaped and at a depth of ~450m (~1475 ft) at the point nearest to the surface below lines L1E and L2E... The 2D and 3D modeled depth of the anomaly extends ~1500m (~4920 ft) deep, or to an elevation of ~900m (~2950 ft), but the source could be deeper. The extreme conductivity of the anomaly and sensitivity of the MT method limit resolution of the inversion result below the massive conductive zone."
Figure 2, below, is a cross section of through line L1E which depicts a view of the massive, low resistivity anomaly described by Quantec. As shown, the bowl-shaped anomaly extends ~1400m (~4590 ft) across the center of the caldera, and at least 1500m (~4920 ft) deep, maybe deeper, depending upon the accuracy of resistivity detection below the conductive body. 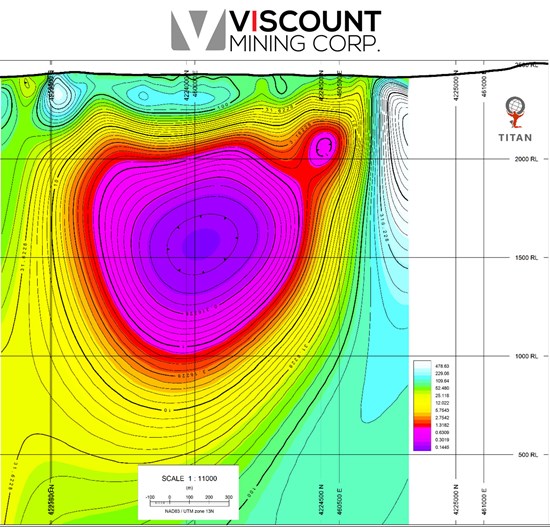 Figure 2. A cross section through line L1E showing resistivity (in ohm-m) to a depth of ~2400 meters (~7975 feet) below the surface.
To view an enhanced version of Figure 2, please visit:
https://images.newsfilecorp.com/files/2736/138093_39bab23f54aafb7a_003full.jpg
Jim MacKenzie, Viscount CEO, commented, "In response to these extraordinary findings, Viscount is currently putting together a drill program aimed at determining the composition of the very high conductivity source. Quantec Geoscience stated this is one of the lowest resistivity anomalies they have ever seen. The Quantec survey shows that the geophysical foot print has the indication that we are looking at a potentially significantly large mineral system at the Passiflora."
Quantec also commented on the structure of the anomaly, saying: "there are branches oriented in a roughly E-W direction that come closer to the surface to ~320m (~1050 ft) depth below lines L4E and L5E in the south-eastern part of the grid. These branches could be related to fault-controlled mineralization or alteration." Figure 3 illustrates these branches that extend closer to the surface in an overhead, 3D view of the highly conductive deposit. 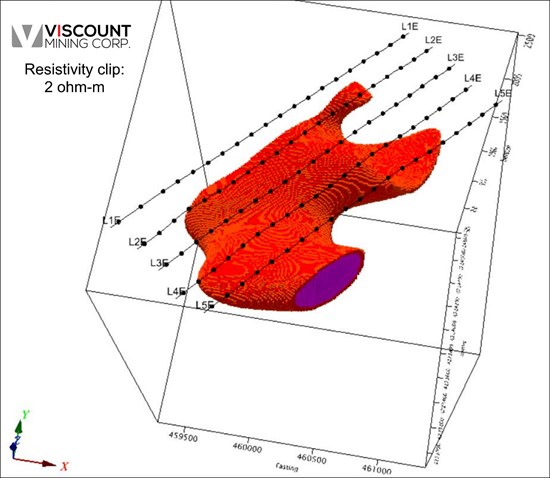 Figure 3. A view of the 3D model of the large region of low-resistivity (<2 ohm-m) inside the Silver Cliff caldera.
To view an enhanced version of Figure 3, please visit:
https://images.newsfilecorp.com/files/2736/138093_39bab23f54aafb7a_004full.jpg
The only historic report available on the Passiflora target is one written by R. A. Rivera for Coca Mines in 1983. In this report, Rivera gives a brief history of the exploration efforts, inferring a potential deposit size of 40 million tons of AgEq in the form of silver, gold, lead, and zinc (not NI 43-101 compliant). It is noted in his report that the deposit was presented as "a set of steeply dipping, NNW striking, tabular mineralized zones" (Rivera, 1983). It is also implied that the deposit could go much deeper as Rivera states that some drill holes presented high assay values at their total depths.
Viscount has drilled a total of six drill holes throughout the Passiflora target, with the deepest hole going 215m (705 ft) below the surface. In each of the six holes, evident phyllic alteration and associated metal concentration increases were observed throughout the entire drilled depth. The level of increased alteration displayed, as well as the volcanic history of the region as a caldera, prompted Viscount Mining to further explore the probability of the Passiflora target presenting as a porphyry at depth.
Jacob Hooker, Silver Cliff Exploration Manager, noted, "The volcanic history of the region as a caldera makes it completely reasonable to assume that the Passiflora target could be a porphyry at depth. This caldera is one of at least ten eruptive centers of the Central Colorado Volcanic Field (CCVF). Four of these ten have been further classified as silicic eruptive centers, of which the Silver Cliff caldera is one (McIntosh and Chapin, 2004). Another member of this classification is Newmont's Cripple Creek Mine, a highly profitable, still active deposit located ~70km NNE of the Passiflora. The ore being mined at Cripple Creek is primarily from diatremes (volcanic breccia pipes), which overlie sulfide-altered, porphyritic igneous intrusions. A similar system of diatremes and sulfide-hosting igneous intrusions may also exist at depth in the Passiflora target."
Qualified Persons
The scientific and technical information contained in this news release has been reviewed and approved by Harald Hoegberg PG, an independent consulting geologist who is a "Qualified Person" (QP) as such term is defined under National Instrument 43-101 - Standards of Disclosure for Mineral Projects ("NI 43-101").
ON BEHALF OF THE BOARD OF DIRECTORS
"Jim MacKenzie"
President, CEO and Director

Viscount Mining is a project generator and an exploration company with a portfolio of silver and gold properties in the Western United States, including Silver Cliff in Colorado and Cherry Creek in Nevada.
The Silver Cliff property in Colorado lies within the historic Hardscrabble Silver District in the Wet Mountain Valley, Custer County, south-central Colorado. It is located 44 miles WSW of Pueblo, Colorado, and has year-around access by paved road. The property consists of 96 lode claims where high grade silver, gold and base metal production came from numerous mines during the period 1878 to the early 1900's. The property underwent substantial exploration between 1967 and 1984. The property is interpreted to encompass a portion of a large caldera and highly altered sequence of tertiary rhyolitic flows and fragmental units which offers potential to host deposits with both precious and base metals. This has been demonstrated in the mineralization historically extracted from the numerous underground and surface mining operations. Based on the accumulated data and feasibility study, Tenneco Minerals made the decision with silver at $5.00 USD an ounce to construct at that time a $35,000,000 USD milling operation for the extraction of the silver reserves at Silver Cliff. Shortly thereafter Tenneco's Mining Unit was sold, and the planned milling operation was abandoned.
The Cherry Creek exploration property is in an area commonly known as the Cherry Creek Mining District, located approximately 50 miles north of the town of Ely, White Pine County, Nevada. Cherry Creek consists of 578 unpatented and 17 patented claims as well as mill rights. Cherry Creek includes more than 20 past producing mines. In January 2021, Viscount entered an exploration earn - in agreement with a wholly owned subsidiary of Centerra Gold Inc. Centerra is a Canadian-based gold mining company focused on operating, developing, exploring and acquiring gold properties in North America, Asia and other markets worldwide.
For additional information regarding the above noted property and other corporate information, please visit the Company's website at