PKR polls: Who are Adam Adli and Fahmi Zainol, the two young guns running for the post of Youth wing chief?

Online voting for PKR party elections will be conducted from May 18 to 20 while in-person voting will be held from May 13 to 17. — Picture by Yusof Mat Isa
Follow us on Instagram, subscribe to our Telegram channel and browser alerts for the latest news you need to know.
By ASHMAN ADAM

According to Professor Azmi Hassan, a senior fellow at the Nusantara Academy for Strategic Research, the post of AMK chief is synonymous with the Reformasi movement which needs fierce leaders to push for change.

A description which fits both Adam and Fahmi.

(The Reformasi movement represents a departure from past Malaysian experience in terms of its aims, scope and institutions and urges Malaysians not just to vote differently but to actually think differently about politics.)

But who exactly are Adam Adli and Fahmi Zainol? Malay Mail takes a look at both these activists to see how much they have already impacted the Malaysian democratic scene. Adam Adli (second from left) has been on the frontlines of change-led protests. — Reuters pic

The 33-year-old has been an active campaigner for the protection of student rights and academic freedom since he himself was a student.

He has been on the frontlines of change-led protests alongside the likes of former Bersih 2.0 chairman Maria Chin Abdullah.

Best remembered for his years as a student activist — which led to several arrests and a sedition charge (which he was later acquitted of) — Adam is known for his courageous attitude.

His first brush with the law came in 2011, when he made headlines for bringing down a flag bearing the image of then prime minister Datuk Seri Najib Razak outside the Umno headquarters at the Putra World Trade Centre.

This later cascaded into a massive protest by undergraduates, university lecturers and members of the public demanding the government repeal the Universities and University Colleges Act (UUCA), which strictly prohibited political activities on campuses.

The year after in 2012, he made headlines again when he was arrested after giving a fiery speech to 500 students outside Universiti Pendidikan Sultan Idris in Tanjung Malim — where he called for the abolition of the National Higher Education Fund Corporation (PTPTN).

In 2013, he was arrested because of a speech he made at a post-election forum at the Kuala Lumpur and Selangor Chinese Assembly Hall — where he urged people to protest the widely contested 2013 general election results.

He was initially charged under Section 4(1) of the Sedition Act and sentenced to 12 months in prison by the Sessions Court in 2014. The High Court subsequently upheld the sentence but substituted the prison term with a fine of RM5,000.

In 2018, the Court of Appeal heard his appeal and granted him an acquittal, with the judge stating that “the conviction was unsafe due to several misdirections in law" and by unanimous decision, the bench set aside the conviction by the trial judge.

His most recent tangle with the law was earlier this year, where he was questioned by the police for his role in the #TangkapAzamBaki rally.

Adam officially joined PKR as a member on September 16, 2021 and was welcomed by PKR president Datuk Seri Anwar Ibrahim, who commended his idealism and battles for reform.

On March 30 this year, he announced that he would be contesting the AMK chief's post, and would be teaming up with lawyer Muhammad Kamil Abdul Munim who will contest the deputy chief post.

In a series of tweets, he said that his team — known as Seangkatan — would also have three vice-chief candidates and 20 executive council members.

Adam told Malay Mail that should he win, his main focus would be preparing AMK and the party for the 15th general election (GE15).

“We do not have time to waste. We should quickly start with unifying and strengthening the organisation post-party election; prepare a workable GE15 framework and groundwork to be implemented at every level as best as possible so that we enter the election as a stronger and much prepared AMK,” he said.

He added that the challenge for him would be that many from this upcoming batch would be first-termers in the world of politics. 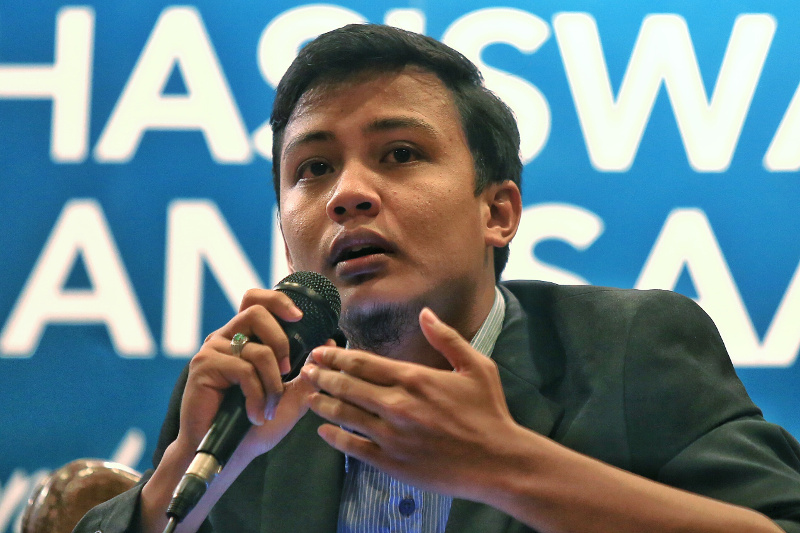 Thirty-one-year-old Fahmi Zainol got into the spotlight for the first time in 2014 when he was just 23 years old.

The then Universiti Malaya (UM) student led a group of students who defied orders to call off an event with Datuk Seri Anwar Ibrahim as the main speaker, the night before Anwar went to court to challenge his second sodomy charge.

At the time, Fahmi, who was UM Students’ Council president, said that he was adamant about going ahead with the function — which was titled “Anwar Ibrahim: 40 Years from UM to Jail” — because he felt Anwar, the federal Opposition leader, had the right to speak at his alma mater.

The programme was declared illegal by UM deputy vice-chancellor of student affairs Professor Datuk Dr Rohana Yusof, as it would “damage the image” of the university.

Fahmi was later suspended after a 12-hour disciplinary hearing. Fahmi and seven other students — dubbed UM8 — said they were disappointed with the university's decision.

This kickstarted the Occupy UM Movement, which was organised to pressure the university into withdrawing the punishment against the eight students.

On July 29, 2016, the Shah Alam High Court allowed a judicial review filed by Fahmi and the other students against the UM board that found them guilty on disciplinary charges and had imposed either a suspension, a fine or a stern warning.

The High Court, in allowing their judicial review application to quash the board’s decision, had ruled that the disciplinary proceedings were not conducted in accordance with the UM disciplinary rules.

On Oct 31, the Court of Appeal upheld a High Court decision which had overturned the board’s action against Fahmi and his then committee members Safwan Shamsuddin, Adam Fistival Wilfrid, Haw Yu Hong and Khairol Najib Hashim.

A year prior to this, then vice president of PKR Nurul Izzah Anwar welcomed Fahmi into the PKR fold, and he was appointed chairman of PKR's student bureau.

He now holds the position of PKR Youth Chief at its Penang chapter, and announced his candidacy for the post on March 27 at a press conference where he also introduced his team members who would also be contesting in the party polls.

They include Rawang assemblyman Chua Wei Kiat and Melaka Youth chief Prasanth Kumar, who will contest for the Youth deputy chief and vice chief posts respectively.

Fahmi told Malay Mail that should he win the AMK chief post, he would focus on drawing in Undi18 voters — or voters who are between the ages of 18 to 20 – as well as first-time voters to show their support for PKR before GE15.

“My strategy would be to focus on bringing in the votes of the youth and first-time voters.

This would be my strategy should I win,” he told Malay Mail.

When asked how he plans to pull young voters back to PKR’s side and away from Muda, he said it is not fair to compare the two.

“First of all, Muda is a new party, and there is a big difference between welfare and political volunteer work.

“I see Muda getting good reception with welfare work. Only, in terms of the volunteerism of political work that will determine the success of the party, it has not been proven,” he said.

He shared that based on data from Ilham Centre on the Johor state election, Muda is in fact not a popular party among the youth.

“So I don't worry about (pulling back the) youth. What I have to worry about is how to turn AMK into an entity that will help PKR and Pakatan Harapan (PH) bring change for the people.

“If this happens, the youths themselves will choose AMK,” he told Malay Mail.

Who has the advantage?

Professor Azmi said Fahmi seems to have a slight advantage against Adam as he has experience with the PKR machinery.

“It is a fight that will be very similar to the deputy president fight between Rafizi (Ramli) and (Datuk Seri) Saifuddin (Nasution Ismail) in this particular case. But Fahmi has a slight edge here as he knows the ins and outs of the party better than Adam,” he said.

He said Adam or Fahmi — whoever should win the post — would need to re-energise AMK; something its current leader Akmal Nasrullah Nasir has failed to do.

“To be completely honest, the youth are more attracted to Muda’s ideology because they have a fresh perspective in terms of political scenario. Its top leadership are all youth who do not have any baggage — and this attracts the youth towards them instead of AMK.

“Why? Some say that Akmal failed to energise the youth section of PKR. That’s the reason why when you compare Muda and AMK, the latter lags behind. So I think either Adam or Fahmi taking over from Akmal can bring a breath of fresh air that can re-attract the youth to PKR’s struggles,” he told Malay Mail.

For the first time, the PKR election process is being conducted in a hybrid manner involving physical presence and online filing through its ADIL application introduced on February 28.