Covid-19 self-test kits now sold in supermarkets, convenience stores, and petrol stations, priced as low as RM6.60. — SoyaCincau pic
Follow us on Instagram, subscribe to our Telegram channel and browser alerts for the latest news you need to know.
By ALEXANDER WONG

KUALA LUMPUR, Nov 1 — Minister of Domestic Trade and Consumer Affairs Datuk Seri Alexander Nanta Linggi has revealed that Covid-19 self-test kits are now available for less than RM7, which is well below the set ceiling price of RM19.90. Early last month, Health Minister Khairy Jamaluddin said the government intends to revise the ceiling price and they are waiting for the current supply to finish before making an announcement.

Nanti said in a Facebook post that a total of 2,570 business premises throughout the country have been authorised to sell Covid-19 rapid test kits as of October 28.

Besides pharmacies, the government aims to increase the availability of screening kits by including supermarkets, convenience stores and petrol stations in stages. The minister said expanding the sale of the kits to more premises will encourage competition and it will help to bring prices down for consumers.

He added that there are already premises that are selling the kits for RM6.90 per kit which is good news for consumers. Earlier today, he launched the sale of the Covid-19 self-test kit in KK Mart at KLIA2 Sepang which is going for only RM6.60 per set. 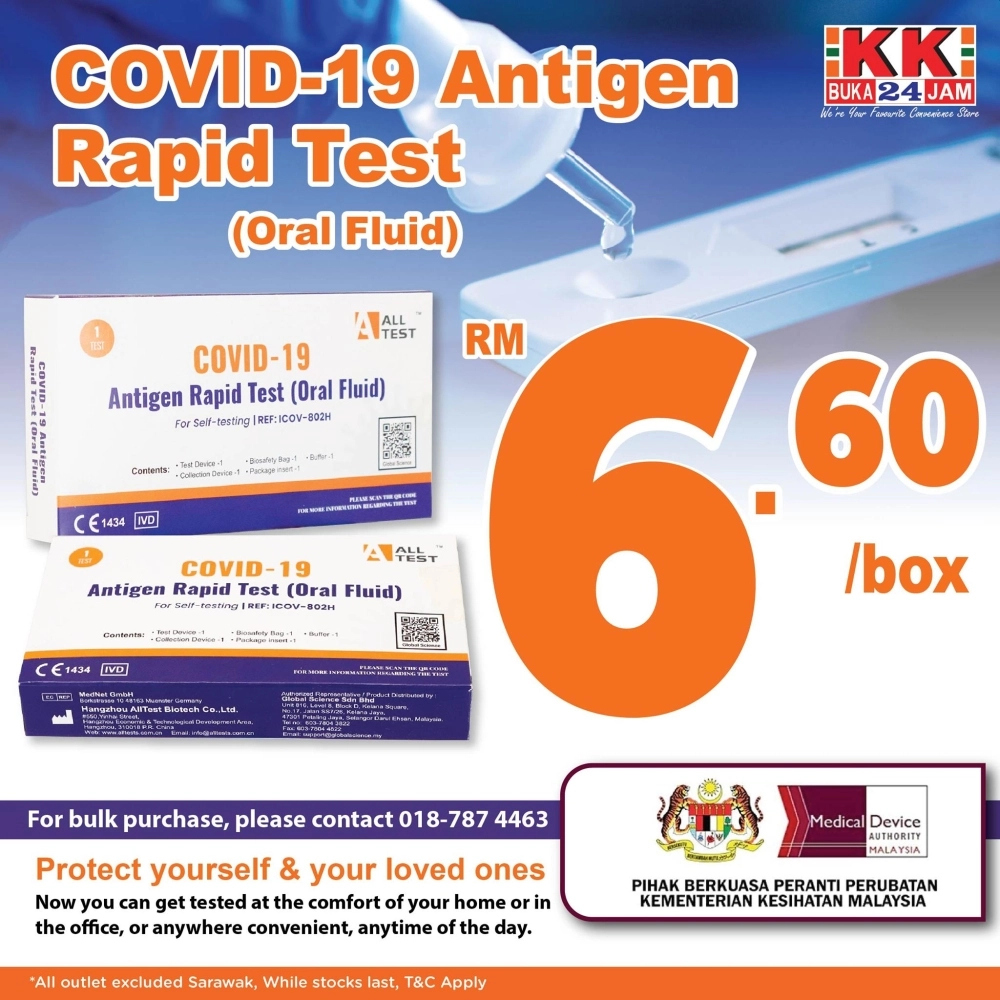 According to KK Mart, the self-test kit is sold at all outlets except Sarawak. — SoyaCincau pic

The RM6.60 self-test kit sold by KK Mart is the AllTest Antigen Rapid Test (Oral Fluid) that’s distributed by Global Science Sdn Bhd. According to KK Mart, it is sold at all outlets except Sarawak.

As of October 29, the Medical Device Authority has approved a total of 54 Covid-19 self-test kits which include nasal swab, saliva or both. Regardless if you got positive or negative, it is recommended that you submit your Covid-19 self-test results via MySejahtera.

The Ministry of Health also recommends that you perform a self-screening before you travel interstate to keep your family members and loved ones safe. — SoyaCincau