KOTA KINABALU, Oct 26 — A total of 927 new Covid-19 positive cases were reported in Sabah today, an increase of 394 cases compared to 533 yesterday.

“The cumulative total of Covid-19 cases in the state is 12,745 cases. Till today, a total of 5,476 patients are reported to have recovered while a total of 7,164 patients are receiving treatment at wards throughout Sabah,” he said in a statement tonight.

Masidi, who is also Sabah’s official spokesman for Covid-19, said there were seven Covid-19 deaths recorded by the Sabah state health department today.

Meanwhile, Masidi said there was a new cluster reported today, namely, Kapor cluster in Kudat, with a total of 46 cases.

Masidi, who is also Sabah Finance Minister II, added that the enhanced movement control order (EMCO) in Taman Khazanah Indah and Pangsapuri Mutiara Kasih in Lahad Datu as well as Felda Umas Kalabakan was extended from October 27 till November 9.

“Exceptions, however, will be given to sundry shops to operate from 6am to 6pm to allow locals to buy necessities,” he said.

Meanwhile EMCO in Taman Mesra and Taman Mawar, Sandakan, will be implemented for two weeks starting from October 28 till November 10. — Bernama 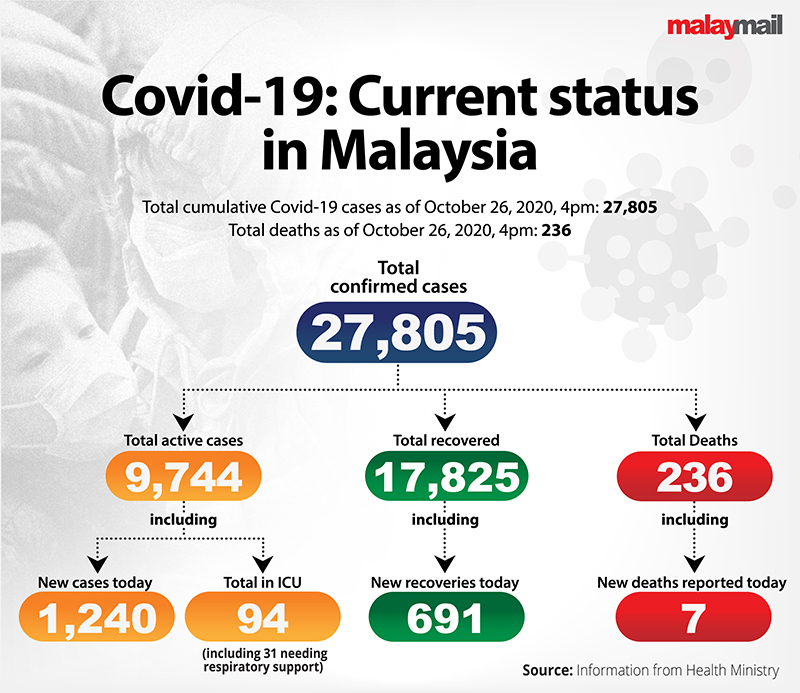