Of the 12 new cases, Health director-general Datuk Dr Noor Hisham Abdullah said five are imported cases, which include two Malaysians who returned from the United Kingdom and Qatar, while another is an Indonesian who travelled from Indonesia to Kuala Lumpur.

“Two more are non-Malaysian citizens where one arrived in Johor from Indonesia and the other arrived in Sarawak from Indonesia,” he said in a statement today detailing the country’s Covid-19 infection updates.

The remaining seven cases are of five Malaysians and two non-Malaysian citizens from local transmission, which include one death.

“Two non-Malaysian citizens are from Johor detected from a pre-operation Covid-19 test while the other is a deceased patient who is a Philippine national, bringing the death cumulative number to 125,” said Dr Noor Hisham.

According to Dr Noor Hisham, the deceased is a 64-year-old man who has a history of heart disease.

The Philippine national had symptoms including fever, cough and breathing difficulties on July 25; however, he did not seek medical treatment.

“On July 29, after he was found unconscious, he was brought to the Queen Elizabeth Hospital in Sabah and was certified dead and found to be positive of Covid-19 tests were conducted,” he said.

While three patients are currently treated in the intensive care unit, 27 recovered today, bringing the total recovery number to 8,644.

Dr Noor Hisham also gave an update of the PUI Sivagangga Cluster, where as of noon today, 262 people were screened.

“Of the 262 people screened, eight were found positive for the virus, 251 tested negative while three are awaiting test results.

“Out of the eight, five are non-Malaysian citizens. Close contact tracing is ongoing,” he added.

In addition, Dr Noor Hisham reminded Muslims in the country who are celebrating Hari Raya Aidiladha to abide by standard operating procedures put in place under the recovery movement control order (RMCO). 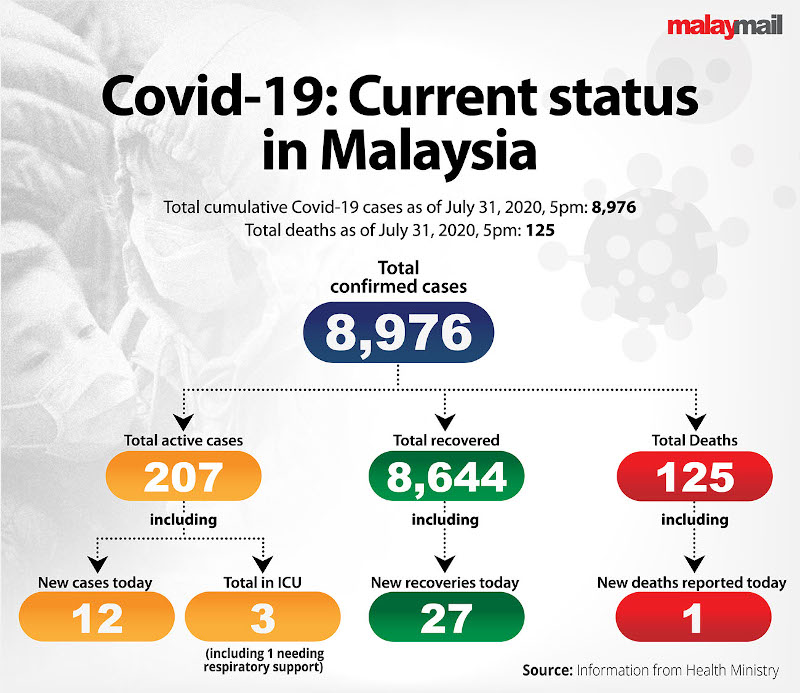