The meeting, which is expected to be chaired by Prime Minister Datuk Seri Najib Razak will discuss ways to deal with the spiking fuel prices which have risen for five weeks in a row, including the return of fuel subsidies.

“It’s true that the fuel prices have been going up. But this is because our fuel prices follow the prices worldwide,” he said after opening the national-level National Blue Ocean Strategy fiesta in SMK Hutan Melintang earlier today.

“Since we adopted the new mechanism, the net increase has been 74 sen, as the prices increased and decreased several times.”

Asked if there was a maximum price limit that would trigger government intervention, Zahid replied that such decision “was one of the options studied”.

Zahid, however, did not elaborate on when any decisions from the meeting would be made public.

Yesterday, Domestic Trade, Consumerism, and Cooperatives Minister Datuk Seri Hamzah Zainudin said he was prepared to step in and bring the issue to Cabinet in the event of a steep fuel hike.

The Larut MP pointed out that the government did not want to see the people suffering due to high fuel prices.

The consecutive price hikes prompted calls for the reintroduction of subsidies.

Fuel pump prices had been left on a float according to the market since 2014.

Last year, Najib said Malaysia had spent close to RM29 billion to subsidise RON95, RON97 and diesel fuel in 2013 prior to the abolition. 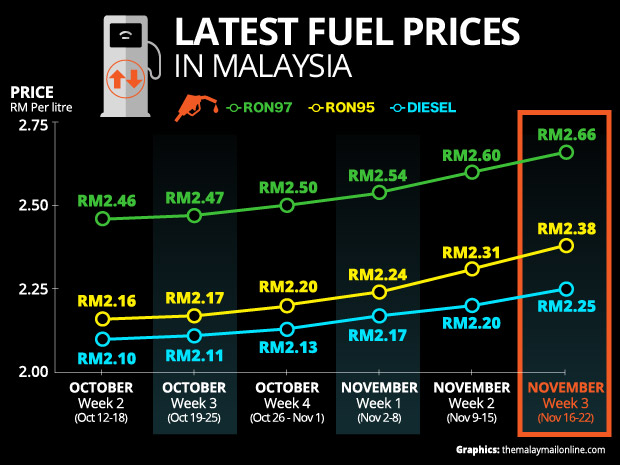