KUALA LUMPUR, Oct 27 ― The Malaysian government is expected to collect RM43.8 billion in Goods and Services Tax (GST) next year, which is projected to account for 18.3 per cent of its entire estimated revenue of RM239.9 billion, according to a Finance Ministry report.

In the Economic Report 2017/2018 released today, the ministry expects higher amounts of revenue from indirect tax such as GST, import tax and export tax, mainly due to better GST collection.

“In 2017, GST collection is expected to grow marginally by 0.7% to RM41.5 billion, primarily contributed by wholesale and retail trade, repair of motor vehicles and motorcycles sector,” the report said, noting that this group accounts for the bulk or 34.2 per cent of the 454,609 businesses that have registered for GST as at end-September 2017.

“GST is proven to be an effective and efficient tax collection system while broadening the tax base.

“In addition, GST is transparent and has encouraged businesses to adopt proper recording and bookkeeping as well as modernise the tax system,” the report said.

The report noted that the Royal Malaysian Customs Department’s regular audits and tax investigations to increase tax compliance has resulted in the identification of 14,578 tax evasion offences from April 2015 to July 2017.

“The implementation of GST is one of the fiscal reform initiatives to further enhance the efficiency of the tax system and widen the tax base. In addition, this is also to diversify the Government’s sources of revenue to ensure sustainable economic growth for nation’s development,” the report said, adding that the government will continue to engage with stakeholders for a better GST system and to ensure compliance.

The GST kicked in on April 1, 2015 at a rate of 6 per cent, replacing the sales and services tax regime in Malaysia and was introduced with 553 types of goods and services zero-rated and another 25 being GST-exempt.

The predicted GST collection in 2017 at RM41.5 billion is expected to contribute 18.4 per cent to the RM225.3 billion government revenue.

Despite the GST being hailed repeatedly by the prime minister as the “saviour” of Malaysia’s economy after lower government revenue due to a decline in oil prices, the Pakatan Harapan (PH) federal Opposition pact had on Wednesday unveiled its alternative budget proposing to abolish the GST.

PH outlined a number of ways in which it could cover the revenue loss from scrapping the GST, but it has since been criticised by the ruling Barisan Nasional coalition as being reliant on a “questionable assumption” that a tax cut would result in higher consumption and higher tax collection. 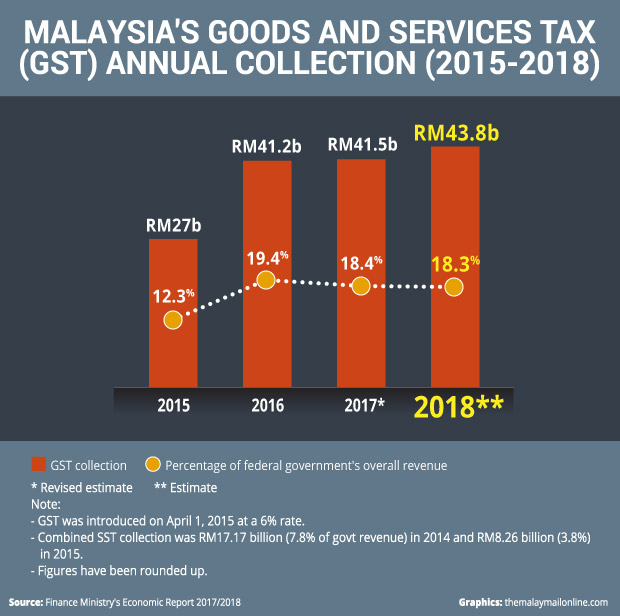