KUALA LUMPUR, Oct 15 — Caregivers and service providers said in a Unicef study that government institutional care for people with disabilities was insufficient, with the former reporting negative experiences at public hospitals.

In the study by the United Nations agency titled “Childhood disability in Malaysia: A study of knowledge, attitudes and practices”, the quality of care was reported to be of a higher standard in private hospitals.

“Caregivers discussed the lack of sensitivity they perceived in health workers, particularly during diagnosis.

“They were reported to use inappropriate language (such as ‘abnormal’ and ‘retarded’) and have a lack of empathy. When health workers displayed feelings of pity, caregivers often saw it as an ‘unprofessional’ response, driven by a lack of awareness and lack of training,” said the study.

The research reported several caregivers as saying that they were “saving all our money” to enable them to seek care for their children with disabilities at a private clinic.

Stakeholders in the Unicef study reported problematic limitations of both human and material resources in the public healthcare system.

Caregivers perceived there was only a small cadre of trained specialist therapists, mainly located in urban areas, which meant that healthcare coverage for people with disabilities was inequitable, even within the public sector.

“Participants also reported that the physical environment of clinics and hospitals was difficult to navigate around. They discussed the frequent lack of access ramps and elevators, which was particularly problematic for children with mobility issues,” said the study. 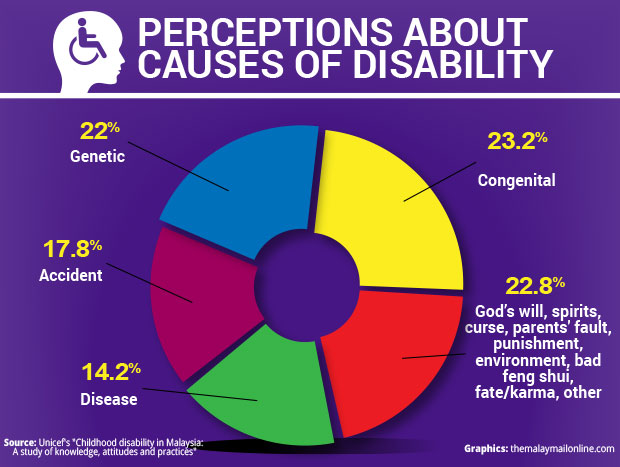 The Unicef study ran from January 2016 to September 2016, comprising a quantitative knowledge, attitude and practices (KAP) survey among the general public and those with and without experience of children with disabilities, as well as qualitative methods like in-depth interviews and focus group discussions with key informants and stakeholders, and workshops for children and adolescents.

Data collection was conducted in Selangor, Kelantan, Sabah and Sarawak. Eighty KAP surveys were administered in each of the four states with a total of 320 respondents.