Politweet: BN’s popularity on Facebook almost double that of Opposition

About 39.1 per cent (2.5 million) expressed interest in a mix of Opposition and BN parties.

Out of the 6.4 million Facebook users aged 21 and above who were interested in BN or the Opposition last July, 56.3 per cent were male and 43.8 per cent were female.

“The Opposition started to improve its exclusive share in January 2017, hitting a peak of 16.39 per cent in May. Interest in the Opposition has dropped by 7.01 points in the last 2 months while interest in BN has increased by 5.66 points,” said the study titled “How political interest is divided by language on Facebook in Malaysia” sent to Malay Mail Online.

The study explained that exclusive groups indicated users living in a “bubble”, which meant that they only liked, shared, or discussed content related to their side.

“Political party supporters who are dedicated to promoting or attacking only one side would fall into this group,” said the study.

The mixed interest group comprised users who shared content related to both sides of the political divide.

“When one exclusive group becomes the dominant group, this places greater pressure on the other exclusive group to ‘reach across’ and bring users over to their side, or at least over to the Mixed group. This is the difficulty currently being faced by the Opposition,” said Politweet.

According to the study, the Opposition had a reach of 48.4 per cent of the total market of political party interest, meaning Facebook users expressing exclusive interest combined with those expressing mixed interest. BN, on the other hand, captured 90.6 per cent of the market.

“This means over half of potential voters on Facebook interested in politics have no interest in what Opposition leaders and supporters are sharing and doing (in the media),” said the study.

Interest was also measured by a user mentioning a party name in a status update, sharing a news link related to the party or sharing content from a party-affiliated page.

Politweet said interest in a political party did not indicate support for the party, only awareness. 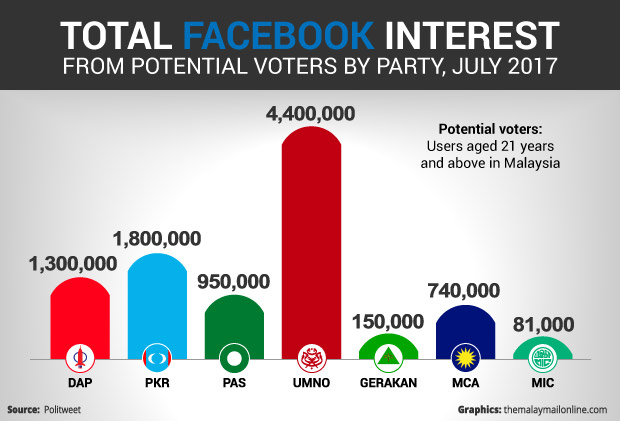