The court had earlier today reversed a magistrate’s acquittal of the 38-year-old, who was dubbed the balloon girl after she was charged with “insulting behavior” by releasing yellow balloons at a 2015 event attended by the prime minister and his wife.

Lawyer Eric Paulsen said his client will not plead guilty.

“We are disappointed, but you know, promoting free media, justice and democracy certainly shouldn't be a crime.

‘We are disappointed but nonetheless we will carry on with the defence," he told reporters after High Court judge Datuk Indera Mohd Sofian Abd Razak allowed the prosecution's appeal against a lower court's acquittal of Bilqis of the charge.

Having reversed Bilqis's previous acquittal, the judge ordered her to enter her defence at the Magistrates' Court where her trial will continue.

The High Court judge had among other things said he had no doubt that the words "Free media", "Democracy" and "Justice" on the yellow balloons were opposed to the current government.

Bilqis, 38, had on August 31, 2015 released several yellow balloons printed with the words “Free media,” “Democracy” and “Justice” from the Pavilion mall’s fifth floor to the second floor where an event's opening ceremony was held.

Bilqis was charged on September 23, 2015 under Section 14 of the Minor Offences Act 1955, where she was accused of “insulting behaviour” with the purpose of provoking anger that may cause a breach of peace. The charge did not specify who was allegedly insulted.

Today, Paulsen told reporters that his client's case was not just about the RM100 fine, the maximum penalty for the offence, but said it was about "the principle and symbol”.

“So the struggle for justice, free media and democracy, even though it's just a symbolic act, it's an important part of us civil society to actually struggle for democracy," he said.

Paulsen said he had already argued in court that Bilqis' actions were not insulting behavior and did not cause a breach of peace, reiterating that no one at the event had noticed the yellow balloons except for security personnel and auxiliary police present.

"We think we have already made a good analogy — if these balloons were thrown in a gathering of Red Shirts, then I have no doubt that it would cause a breach of peace. So this present case, it's not disputed that no one noticed it," he said.

The High Court's decision today does not mean that Bilqis has been found guilty, as her trial at the Magistrates' Court had only been dismissed at the end of the prosecution's stage and had yet to reach the defence stage.

The Magistrates' Court had last July ruled that the prosecution had failed to prove that there was a prima facie case that required Bilqis to enter her defence.

The magistrate had ruled that the prosecution had failed to prove all three elements of the charge as it was not shown that Bilqis’ actions amounted to insulting behaviour, or that she had intent to provoke anger or that there may be a breach of peace.

Bilqis's case was sent back today to the Magistrates' Court, which fixed mention of the case on October 16. 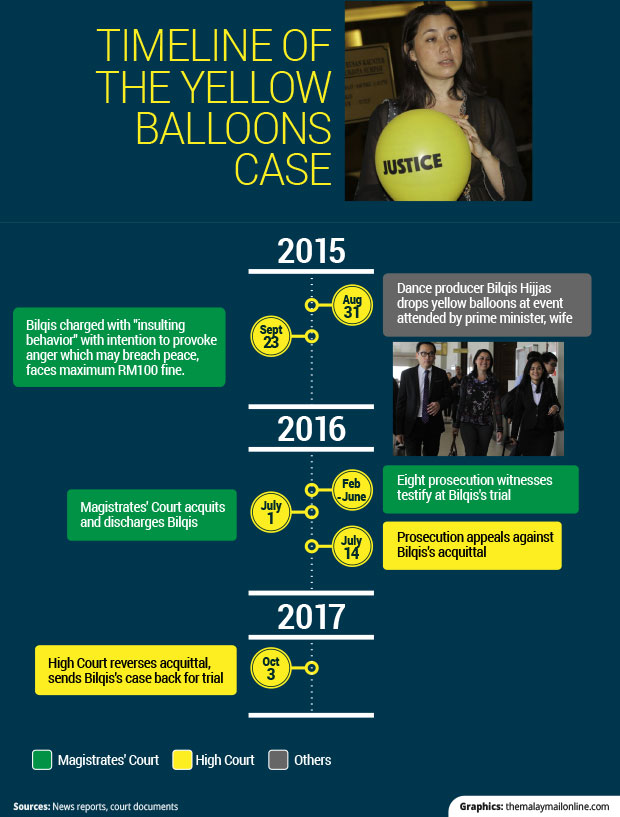