Cheat sheet on lawsuits against the EC’s proposed redelineation

KUALA LUMPUR, July 8 ― Voters and state governments continue to be locked in legal battles over the Election Commission's (EC) proposed redelineation exercise, though there’s just about a year till fresh elections must be called.

Several court cases against the EC have been dismissed or dropped, but there are still eight new or ongoing legal challenges seeking to halt the redelineation exercise.

Here are some quick facts on the redelineation exercise and the court cases.

1. What is this redelineation exercise?

It is basically to review the division of Malaysia into federal and state seats, which could involve the redrawing of electoral boundaries of the seats, renaming of seats, and movement of voters. Such reviews may culminate in no changes to a particular state.

The EC's role here is to propose such changes, which voters, local governments and local authorities may then contest, with the final proposed changes to be submitted to the prime minister for tabling in Parliament and subsequently to the King if passed by federal lawmakers.

The lawyers told Malay Mail Online that this meant all states in peninsular Malaysia are to be reviewed collectively and that the redelineation exercise cannot be completed if any of these states are omitted. A government lawyer representing the EC had Wednesday similarly told the Kuala Lumpur High Court that the report to the PM cannot be submitted if any states are skipped.

3. What are these court cases mainly about?

While the Selangor government's legal challenge was filed just after the EC's first round of proposed redelineation, some of the other court challenges are partly due to the EC's allegedly unlawful action of proceeding to the second round of proposals without including Selangor.

Many of the ongoing court challenges also cite the puzzling usage of a purportedly defective electoral roll that is missing information on some voters' registered addresses, with allegedly 178,887 such voters found in Johor; 136,272 in Selangor; 56,323 in Perak; and 44,190 in Melaka.

Others like the Bandar Tun Razak voters are challenging the EC’s rejection of their objections and decision not to hold a local enquiry to hear them out, while the two Perak cases have said the local enquiries that they attended are either unlawful or had not resulted in any revisions by the ECs.

A key complaint is alleged malapportionment ― which violates the constitutional requirement for seats with approximately equal number of voters ― with imbalance in voter numbers in different seats.

4. So many cases, will EC have enough time?

Critics have repeatedly asserted that the EC has sufficient time to complete its redelineation exercise despite the multiple court challenges, citing the Federal Constitution's Article 113(2)(iii) that requires completion within two years from the date of commencement.

Since the EC's first notice of its proposals were gazetted September 15, 2016, this has been taken to mean that the deadline will fall in September 2018.

Another deadline to be mindful of is that GE14 must be held by August 24, 2018, but the EC chairman had recently said it may use the unrevised electoral boundaries and names for this national poll if the redelineation exercise is not completed by then.

The federal government expects to spend an estimated RM5.2 million for the redelineation exercise.

Just for comparison, the government reportedly allocated a maximum budget of RM400 million for the EC to run the 13th general elections. The Sarawak election for state seats in 2016 is RM85.4 million, while the by-elections for the Kuala Kangsar federal seat and Sungai Besar federal seat the same year cost RM1.28 million and RM1.49 million respectively.

Here's a quick recap of ongoing and newly-filed court cases that seek to pause and ultimately halt the EC's entire redelineation exercise: 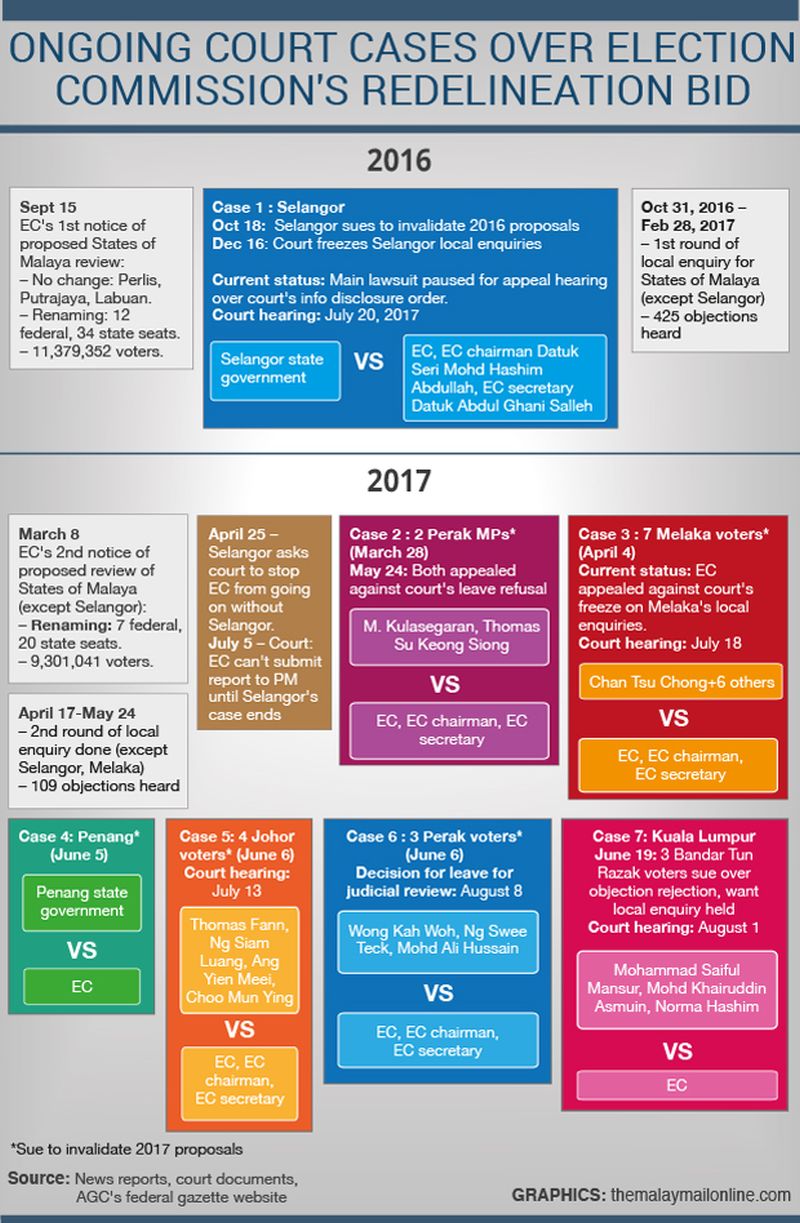