KUALA LUMPUR, April 21 ― The Human Rights Commission of Malaysia (Suhakam) will carry out its own investigation into the disappearance of three pastors and a social activist who have all been missing for months.

Suhakam chairman Tan Sri Razali Ismail said the rights watchdog has been urged to assist the families of the missing four in investigating and locating them, as well as to serve as a “channel of communication” between the families, the police and government.

“Suhakam joins in the concern of all parties and will conduct an independent investigation into the matter in line with its statutory mandate,” he said in a statement today.

Suhakam's statement come after it received a memorandum from local human rights group Suara Rakyat Malaysia (Suaram) and other groups on behalf of the families of the missing four.

Today, Suhakam stressed that everyone has the right to not be arbitirarily deprived of their life; the right to be protected against torture, and other cruel, inhumane or degrading treatment; the right to liberty and security; and the right to respect for family life.

“Suhakam appeals to the authorities to use all means at their disposal to elucidate the fate of these missing persons, ensure that the rights of family members of the missing are upheld at all times and that they have access to information regarding the ongoing investigation,” Razali said.

“Suhakam hopes that the authorities will take all necessary steps to alleviate the concerns and unease among the public in this regard, and bring to justice those responsible for the crimes,” he added.

Of the four that has been reported missing, Pastor Raymond Koh is the latest one and was abducted in broad daylight on February 13. No ransom demand has been made and police are currently investigating his case. 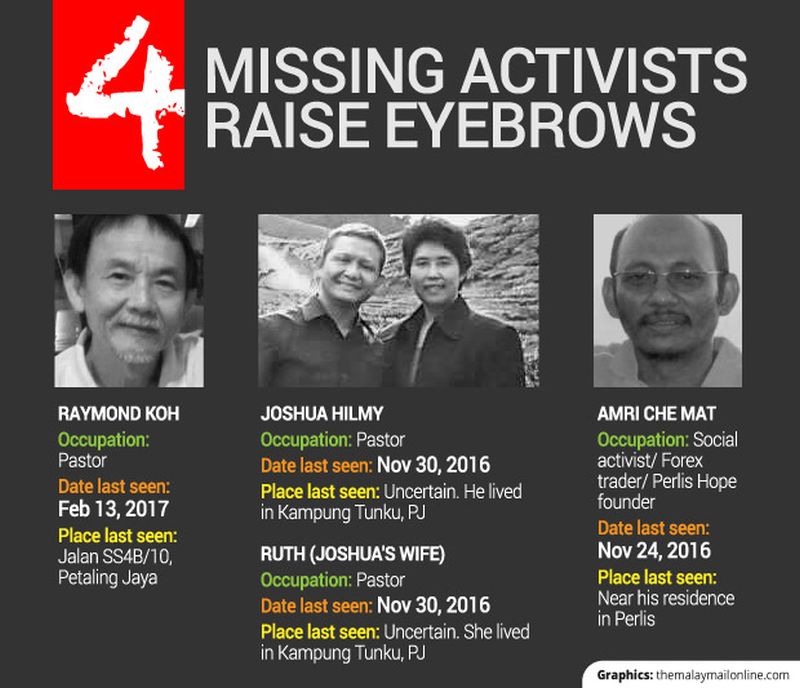