KUALA LUMPUR, April 12 — Bukit Aman has warned several parties including the Bar Council from allegedly confusing the public over a recent spate of missing activist, especially over social media.

Inspector-General of Police (IGP) Tan Sri Khalid Abu Bakar said from the five cases claimed to be abductions, only Pastor Raymond Koh's case is confirmed as one, while three other cases are classified as missing people, and Peter Chong had in fact fled the country.

“I see that it has been made viral, all these people have been kidnapped. I want to warn those who want to confuse, this is not true.

“These five people have not been kidnapped. We have proof only one person has been abducted, that is Pastor Koh,” he told reporters during a press conference at Bukit Aman today. 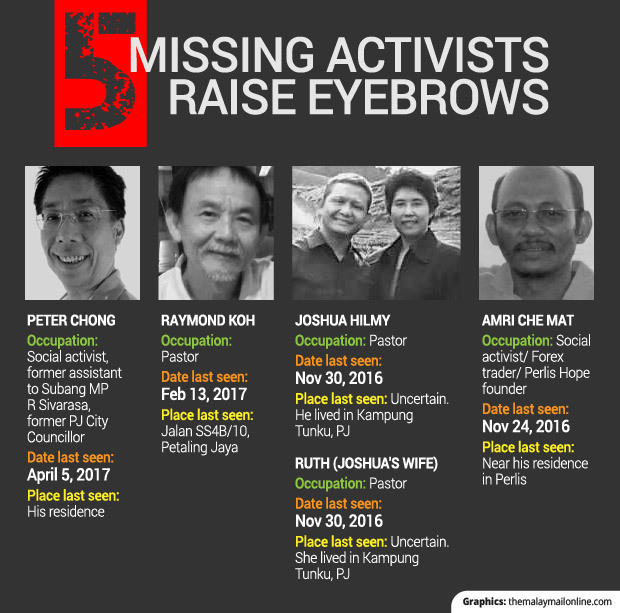 The police chief also pointedly told parties like Bar Council to not comment on the matter, as the police were already investigating the cases.

“Several parties including the Bar Council has been concerned by this case, we are also concerned, we are even more concerned in fact,” Khalid said.

Five activists have gone missing since November last year, sparking concern among the public, and civil activists who held a solidarity vigil over the weekend.

The most recent was former Petaling Jaya city councillor Peter Chong, who disappeared after posting an ominous message on Facebook about being warned by a stranger that people were increasingly disappearing and to be careful.

Aside from Chong and Koh, other recently missing activists include Perlis Hope founder Amri Che Mat, Pastor Joshua Hilmy, and his wife, Ruth.