KUALA LUMPUR, Feb 18 — The Selangor Islamic Religious Department (Jais) is appealing a landmark court decision that quashed its compulsory acquisition of 26 acres of land for a purported mega mosque, a lawyer confirmed yesterday.

Ho Ai Ting, one of the lawyers representing private landowner United Allied Empire Sdn Bhd (UAE), confirmed that Jais and five other defeated parties have filed to challenge the Court of Appeal decision favouring her client.

“They had filed the leave application to appeal to the Federal Court. We received the application [on] February 16,” she told Malay Mail Online when contacted yesterday.

Those seeking to have their appeal heard by the Federal Court must first obtain leave to do so, and must present questions of law to the apex court.

According to Ho, the six appellants filed in a total of 29 such questions in three separate leave applications, with Jais, the Selangor Land and Mines Department director, the Kuala Selangor land administrator, and the Selangor government jointly filing six questions.

Ho said the 29 questions ranged from whether Form A is a mandatory requirement in a land acquisition process, and whether the mere issuance of Form K — notice to take formal possession — was sufficient to vest ownership of the land in the state authority.

These two procedural issues formed the bulk of the 29 questions, she said.

It is not known when Jais and the five others had filed for leave of appeal, but Thursday was the end of the one-month deadline for them to do so.

The court has yet to fix any dates to hear the applications for leave to appeal, she said.

On January 17, the Court of Appeal declared Jais’s acquisition of UAE’s land as unlawful, invalid and done in bad faith, which meant the land would have to be returned to the private firm.

In the ruling hailed as a “landmark” judgment that effectively enhanced the protection of landowners’ rights in Malaysia, the appellate court had clarified the procedural requirements and legal process that public bodies must fulfil before forcibly acquiring private land.

The Court of Appeal found that the Selangor authorities failed to comply with the land acquisition process, ruling that Form A is a mandatory requirement and that the issuing of a Form K alone does not end the landowners’ rights to pursue a challenge against a land acquisition.

The Selangor authorities previously admitted failure to issue the Form A — a public notice to notify that the land will be acquired and the very first step in a compulsory acquisition process — for the UAE land.

They also failed to show documentary evidence in court that they had registered the required changes in land title records after issuing Form K.

The issue of Form K’s effect was crucial to determine if UAE still retained the legal standing to continue with its lawsuit, with UAE’s lawyers arguing that a landowner’s’ rights will only end after the endorsement of memorial or the recording of the state’s rights over the acquired land.

UAE, an ethnic Chinese-owned company, had filed for a judicial review in April 2013 as a last resort to revoke the compulsory acquisition of its land that was roughly the size of 20 international football fields.

In the lawsuit, UAE had accused the Selangor authorities of purported racial oppression and violation of its constitutional rights, claiming that the religious bodies had abused their powers to avoid paying fair compensation for the land and had shored up their land bank for future development.

In a typical compulsory acquisition process, property owners can expect to be paid lower than the market value, or lower than the sum they may have received if they had sold the property.

According to UAE, compulsory acquisition of private land was only allowed under Article 13 of the Federal Constitution if it benefited the public and if property owners received adequate compensation. 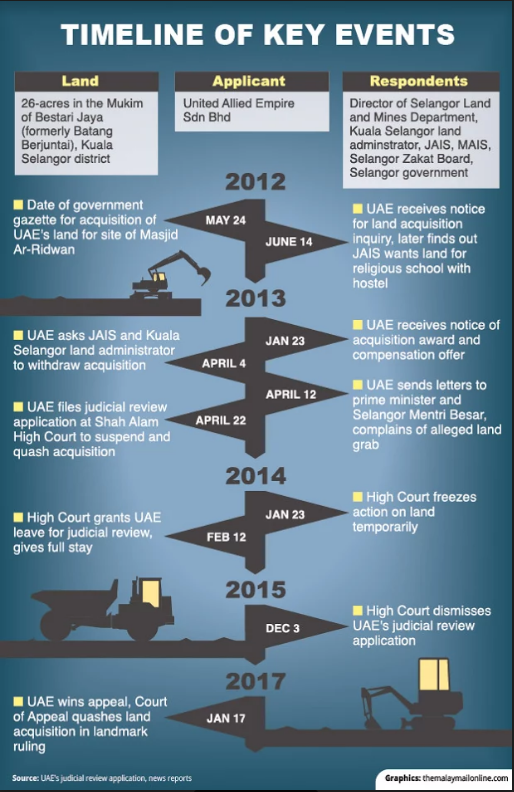