Jamilah will be a very good elected representative if she wins by-election, says Zahid 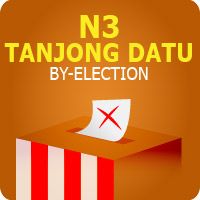 Deputy Prime Minister Datuk Seri Dr Ahmad Zahid Hamidi said he knew her personally and she had a very good heart, besides being a top-notch cook.

“Tell her of your needs and she can convey them to me. I can then contact your Chief Minister Datuk Amar Abang Johari Openg for much greater impact,” he said at a meet-the-people session at the 20-door Nek Bujur longhouse in Kampung Pueh near here today.

Earlier he launched the military “Projek Gotong Royong Perdana” event in the area, one of the three Salako Bidayuh settlements in the state constituency.

Zahid said by supporting Jamilah, the people would show that they wanted her to continue her late husband Tan Sri Adenan Satem’s legacy.

“Adenan, your late Chief Minister and elected representative had done much for Tanjong Datu and its people in his lifetime.

“He has some unfinished missions and agendas and there is no better person than Jamilah to continue on with them as she has very good knowledge of them,” he said.

“I am very sure too Abang Johari will also want to fulfil all election promises made by the late Adenan. If Jamilah wins, they will certainly be done,” he said.

Meanwhile on the state security, he gave assurance the military and the federal government would do all possible to safeguard Sarawak.

“We have now, for instance, the Blue Ocean strategy in which the military worked closely with the police in maintaining public security.

“They will continue to hold regular joint patrols in those black areas in particularly, he said.

Zahid later also announced a federal allocation totalling RM330,000 for four government projects in the village and a nearby village. — Bernama