Prices of greens, seafood shoot up ahead of Chinese New Year

PETALING JAYA, Jan 6 — Be prepared to dig deeper into your pockets in the next few weeks ahead of Chinese New Year as farmers and fishermen have warned of more price hikes.

Some food items are already costing as much as 50 per cent more, according to the average prices recorded by the Federal Agricultural Marketing Authority (Fama) in mid-December and yesterday.

Highland round cabbage was priced RM3.65 per kg just weeks ago but was sold at RM6.75 yesterday. The price of standard sized process chicken has also gone up, from RM6.70 per kg to RM7.80. Other meat and seafood have also seen drastic price increases.

Farmers’ and growers’ associations cited several factors affecting the pricing, including the weakened ringgit and the unusually long monsoon season this time around.

Cameron Highlands Agriculture Association chairman Ng Tien Khuan said produce by farmers there had been affected as much as 50 per cent because of the weather.

“Farmers are having a tough time as what they have planted cannot be harvested. The lack of sunlight and cold weather have affected the growth of vegetables,” he said.

“This will lead to higher prices of greens. There is nothing the farmers can do as the planting to cope with the demand over the Chinese New Year season started two months ago.”

Ng said vegetables planted now would not grow in time for the festival, adding that the situation affected all farmers, even those on lowlands.

Farmer T. Thayalan, 27, said the production at his Simpang Pulai farm had dropped because of the rain.

Thayalan, who grows eggplants, cabbages and beans, said he was able to harvest one tonne of vegetables daily previously but this had dropped to 500kg in recent days.

He said the low production would push prices up further.

“The lower ringgit makes it more costly to import and the Agriculture and Agro-Based Industry Ministry places an import quota on certain vegetables,” he said.

Chong said the wholesale prices of local vegetables had now gone up by as much as 50 per cent. 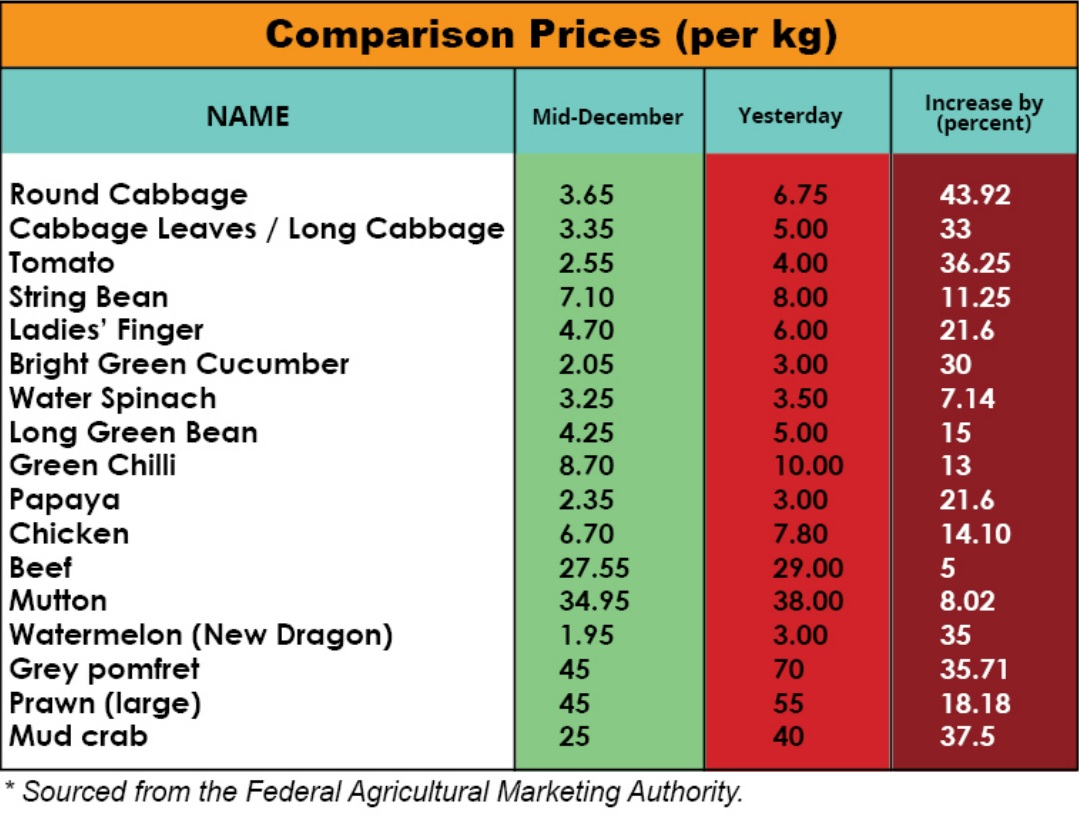 Federation of Livestock Farmers’ Associations of Malaysia president Datuk Jeffrey Ng said it was also possible that meat prices would go up.

Asides from the weakened ringgit, Ng said, the price of corn and oil globally  played a role. The labour shortage in the industry did not help either.

“With enough workers, one can control many factors. Broiler chickens thrive in cold weather as they grow faster. But chicks can also easily fall sick,” he said.

Ng was confident the supply of chicken meat, eggs and pork would be sufficient to cope with the festive demand.

National Fishermen’s Association chairman Ahmad Rudin said fishing activities would still be carried out from time to time nearer to the coast to cope with the festive demand.

“Chinese New year favourites including crab and prawns are still sufficient. So it is likely they will still be sold at normal prices,” he said.

However, Manjung Indian Fishermen Association president Raja Kumaran, 55, said his members were unable to head out to sea because of choppy waters.

“The visibility is also poor. The strong winds and high waves could also damage fishing boats. Most rather stay behind and mend their nets,” he said.

“If there is a shortage in supply, it will definitely lead to an increase in prices,”

Raja said the price of large prawns, which had been at RM45 per kg for the past two months, had gone up to RM55 since Jan 1.

He said the price of mud crab had also gone up from RM25 to RM40, which those of price particularly grey pomfret had increased from RM45 to RM70.

Bernama reported fishermen at six villages near Pasir Gudang port in Johor were bracing for losses because of an oil spill following the collision of two container vessels on Tuesday.

“When I visited the area, work to clean the oil spills was in progress, but there were still traces of oil on the sea surface which could have adverse effects on fishing equipment,” he said.

“So, I’m not sure whether they (fishermen) can go out to sea or not,” he said.

The association is waiting for a full report from its affected members before any action, including demanding compensation, is taken.