KUALA LUMPUR, Nov 20 — A concerned Bersih 2.0 today said lawyers have had no contact with its chairman, Maria Chin Abdullah, since she was detained under the Security Offences (Special Measures) Act 2012, or Sosma, before the Bersih 5 rally.

“Up to now, the lawyers haven’t managed to meet with Maria. So we’re very concerned as to what is happening in detention,”  lawyer and steering committee member Fadiah Nadwa Fikri told a press conference today.

“We know under this particular Act, Sosma, there is a lot of secrecy surrounding detention. The law gives so much power to the police to decide what to do with the person detained under this Act.

“Under Sosma, the police can detain Maria for 28 days and withhold legal representation for two days.

According to Fadiah, Maria’s lawyers are not even aware of her current whereabouts.

Fadiah also said she was concerned that the law could be use to punish the Bersih 2.0 chief, and reiterated the group’s commitment to secure her release.

“This law departs radically from the basic rules of evidence, which means you can easily be convicted ... If you go to court, you will not get a fair hearing,” Fadiah said, adding that Maria may face up to 15 years’ jail if found guilty.

The group will kick off its campaign for Maria’s release and to abolish the Act with a candlelight vigil outside the Jinjang police detention centre at 8pm tonight.

“We are especially shocked and disgusted with the blatant abuse of Sosma, a controversial law justified as a counter-terrorism measure, against an innocent citizen like Maria.

“This is a clear suppression the citizens’ right to dissent and undermining parliamentary democracy,” Bersih 2.0 said in a separate statement mailed to the media. 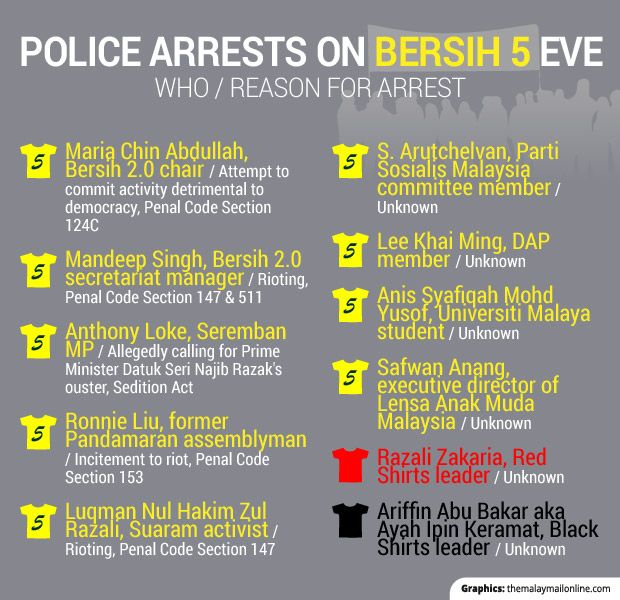 At its press conference today, the group reserved four empty seats as a symbolic gesture towards four of its arrested activists including Mandeep Singh, Hishamuddin Rais, and Safwan Anang.

Bersih 5 said in a statement later after the press conference that Mandeep and Safwan have been released at 2pm.

Maria was detained on Friday, also under Section 124C of the Penal Code that prohibits the attempt to commit activities detrimental to parliamentary democracy.