KUALA LUMPUR, Nov 15 — Online freedom in Malaysia worsened in nearly all categories measured in a global report on Internet censorship, putting the country among those with the most marked increases of government restrictions.

According to Freedom House's “Freedom on the Net 2016” report, Malaysia rose two points on its Internet Freedom Index since 2015, with the current score of 45 indicating a “Partly Free” environment with continued and growing restrictions on local users.

The index rates a country's overall freedom from 0 to 100, with 0 meaning no restrictions whatsoever and 100, the complete opposite.

The watchdog group that advocates freedom and democracy credited this to Malaysia's first overt violations of its previous guarantee not to filter content online, which the country made when it began its embrace of the Internet.

Putrajaya's policy of non-censorship was an integral part of the Multimedia Super Corridor (MSC Malaysia) project and is also legally enforceable under the Communications and Multimedia Act 1998 and MSC Malaysia's Bill of Guarantees.

“For the first time, the government reneged on pledges never to censor the internet During this coverage period, the government implemented political censorship for the first time, and blocked access to popular websites and blogs, including Sarawak Report, Malaysia Chronicle, and The Malaysian Insider among others, for publishing 'unverified contents' which could 'create unrest.'”

Freedom House cited the block as contributing to the closure of The Malaysian Insider in March.

Malaysia was also among countries that censored the most out of 10 possible topics, with “widespread restriction” on criticising authorities and corruption, on discussing conflict and political opposition, on satire and social commentary, and blasphemy. 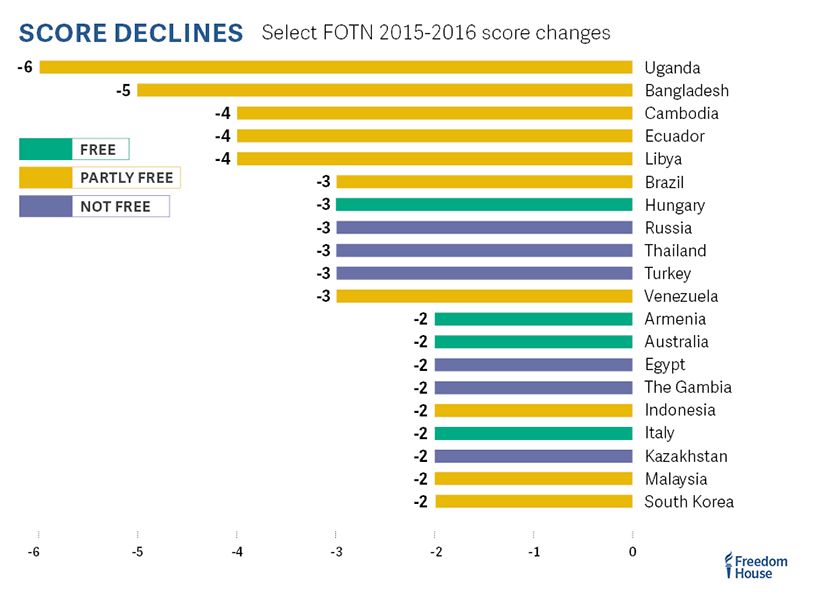 Censorship was the biggest contributor to the country's drop in the index, as it resulted in a two-point decline in the “Limits to Content” category since last year; the country scored 16 out of a possible 35, with 35 indicating absolute restrictions.

The group singled out the Communications and Multimedia Act 1998 (CMA) as the main culprit for the regression, noting that it was used to act against the named news portals and more.

While Freedom House conceded that it was not the first case of Malaysian regulators restricting access, it noted that these had previously not been for “political content”.

“Until recently, there were no restrictions on websites except for those which violate national laws governing pornography,” it said.

However, the group noted that the restrictions also came at a time when the Barisan Nasional (BN) government was pushing to increase broadband penetration and access, which it described as “excellent” even when considering the urban-rural divide.

Data from local Internet regulators, the Malaysian Communications and Multimedia Commission (MCMC), showed that broadband penetration was over 70 per cent as of 2015.

But the observed monopoly of the network infrastructure in Malaysia by TMNet, among others, contributed to a one-point decline for Malaysia, earning it a score of 9 out of 25 in the “Obstacles to Access” category of the report, indicating rising — if marginal — restrictions. 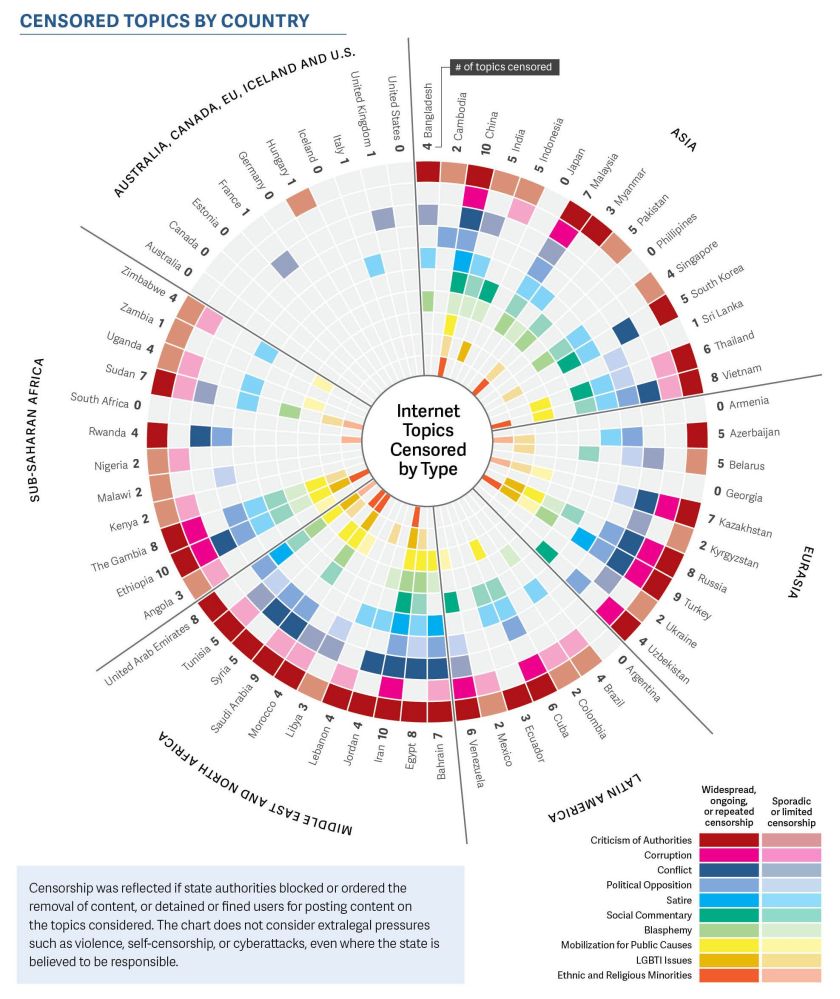 Paradoxically, Malaysia registered an improvement in the area of “Violation of User Rights”, cutting one point from last year's score of 21 out of 40, despite Freedom House citing a laundry list of action by authorities against journalists, politicians, activists, and ordinary users.

Among others, it cited the case of activist Fahmi Reza who was prosecuted for a clown caricature of the prime minister.

Fahmi's prosecution was similar to other cases in countries with rising online restrictions such as Egypt, which sentenced a youth to three years' imprisonment for superimposing Mickey Mouse ears on a photo of President Abdel Fattah el-Sisi, and Turkey, which is prosecuting a doctor for a meme comparing President Recep Tayyip Erdoğan's face to the character Smeagol from the Lord of the Rings fantasy movie franchise.

“The government continued to charge social media users, civil society activists and politicians for online remarks, though a sedition case against a prominent academic involving online speech was dropped,” read the preamble to the section on user rights.

“At the same time, the government is also amending the Communications and Multimedia Act to punish social media 'misuse,' and threatened to require internet users to register in order to publish blogs.”

Globally, Malaysia's regression puts it among the 20 nations with the biggest declines in Internet freedom, with the worst being Uganda that fell six points in the index.

By overall score, Malaysia's 45 points made it the 30th least free nation in the report; China and its “Great Firewall” topped the list for Internet restrictions, with a score of 88 that put it firmly in the “Not Free” category.

Malaysia's growing restrictions was a reflection, however, of a global trend that now has over two-thirds of Internet users living under laws that punish or prohibit criticism of their countries’ leaders.

“Freedom on the Net” is an annual report that ranks countries on their online freedom and provides a global overview of developments in the area. It was first released in 2009.

It is conducted by Freedom House, a pro-freedom and democracy organisation based in and funded by the United States. 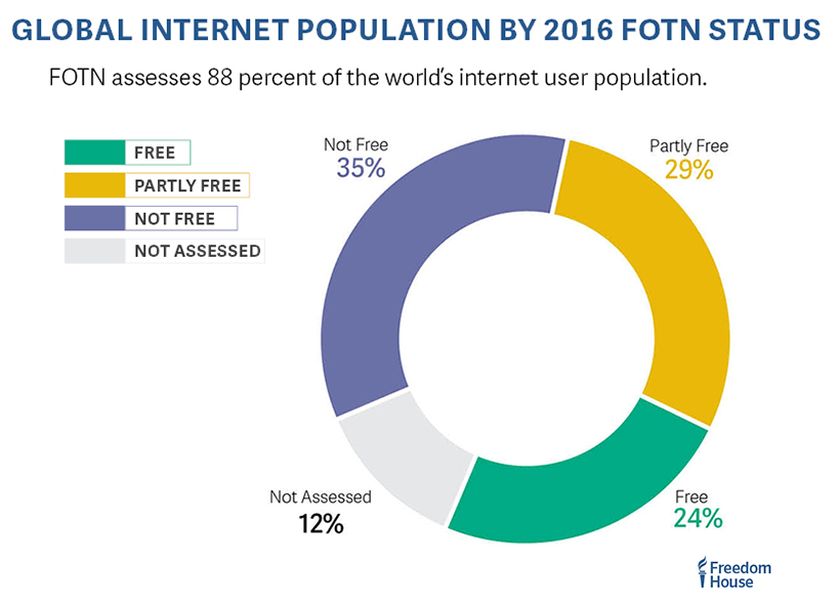