Politweet: With redelineation, three-cornered fights in Selangor will favour BN

KUALA LUMPUR, Nov 7 — Barisan Nasional (BN) stands a good chance of winning enough state seats to take back Selangor from Pakatan Harapan should there be three-cornered fights there, following the proposed redelineation exercise by the Election Commission (EC).

According to a report by research outfit Politweet, Pakatan Harapan parties stood a likely chance of retaining control of the Selangor state government in the next general election even without the support of Islamist party PAS, before the redelineation exercise.

“After redelineation, many changes took place, giving BN a better chance to win control of the state particularly if there are three-corner fights,” Politweet said in its report made available to Malay Mail Online.

“If Amanah wins enough seats then Pakatan Harapan will not need PAS seats to govern. However three-corner fights between BN, the Opposition and a third party are likely to cause the Opposition to lose control of the state,” it added.

According to Politweet, 443,484 voters will be transferred between existing seats due to the redelineation, resulting in an increase in ethnic-majority seats. 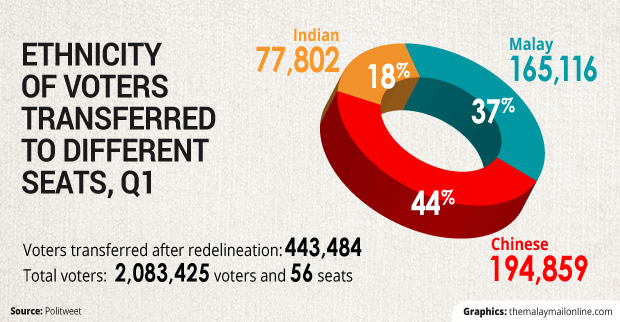 This, in turn, will make it easier for political parties that appeal to specific ethnic groups to campaign in those seats.

Of those affected by redelineation, 37 per cent of them are Malays, ethnic Chinese 44 per cent, and ethnic Indians 18 per cent.

Running 1,000 simulations of the next state elections, the study explored a “what-if” scenario where Malay voters turned away from existing Opposition parties to voter for a third party, while Malay voters who were already BN voters continued voting for the ruling coalition. 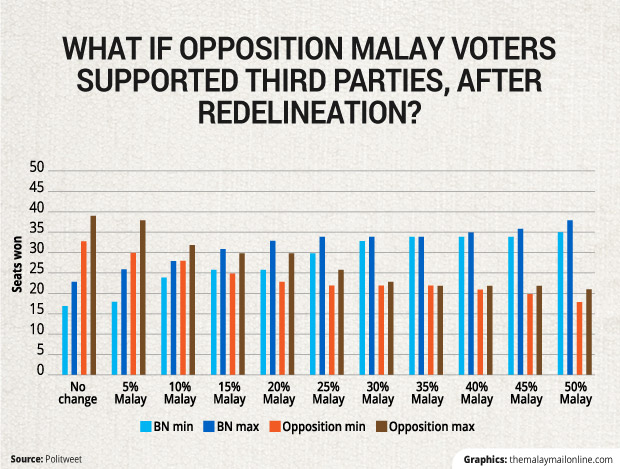 “If five to 10 per cent of Malay voters opted for a third party (PAS, Amanah or PPBM) this can lead to PAS and PKR losing enough seats for BN to gain the advantage,” it said.

A mere 10 per cent loss of Malay voters from Pakatan Harapan to a third party could result in the possibility of a hung assembly if BN performs well.

The report pointed out that Pakatan Harapan would even lose control of the state government to BN if 15 per cent of their Malay voters opted to vote for a third party.

If the numbers increased to 25 per cent, the possibility of BN winning Selangor becomes certain.

Despite that, Politweet predicted it is unlikely for a third party to win any of the seats even after gaining 50 per cent of the Malays who had voted for the federal Opposition pact.

In 2013, then Pakatan Rakyat made up of PKR, DAP and PAS had won 44 out of the 56 Selangor state legislative assembly seats.

In its latest redelineation exercise, the EC is seeking to change the names of 12 parliamentary seats and 34 state constituencies nationwide ahead of the next general elections due in 2018.

Selangor Mentri Besar Datuk Seri Azmin Ali has since said Selangor government will file an application for judicial review against the exercise, claiming it will disrupt the peace between the state’s multiracial voters.