How did Putrajaya plan to spend money in 2016?

By Ida Lim and Zurairi AR

KUALA LUMPUR, Oct 19 — The past year has been a juggle for the government to manage the country’s wallet.

And so while you wait to see what’s in store for Budget 2017 this Friday, we thought you might like to look back at how Putrajaya planned Budget 2016 last year while sticking to its deficit targets.

When Budget 2016 was tabled last October, the federal government expected that it will spend RM267.2 billion this year, down by roughly RM7 billion from what was allocated in 2015.

Out of the total, RM215.2 billion was set aside for operating expenditure (opex), with the bulk of it going to social expenditure at RM81.8 billion (38 per cent).

But when global crude oil prices continued to drop and hurt Malaysia’s revenue, the government revised Budget 2016 in January, and the final figure is bound to be lower.

In our report below, Malay Mail Online lists the seven ministries that received the highest allocation in Budget 2016. For each of those ministries, we looked at their opex, and picked the top three subsections where they would be spending their allocation to know what costs the most to run annually.

Putrajaya allocated around one-fifth of its budget on education, and the Ministry of Higher Education would still rank sixth in the list even if the two were separated.

Naturally, MOE’s biggest allocation was in education operations, which included the education system from early education, to primary, secondary, and post-secondary education.

Under its special programmes subsection, the highest allocation was for hostel food aid (RM1.09 billion) and per capita grants (RM620 million).

Out of the RM7.31 billion allocated for public universities, the Bumiputera-exclusive Universiti Teknologi Mara received the biggest fund at RM2 billion.

There was public uproar when Budget 2016 was tabled last October as MOHE's allocation was slashed by RM2.4 billion from the projected allocation of RM15.78 billion for 2015, resulting in an overall cut of RM1.4 billion (16.5 per cent) for public universities, where 19 out of 20 of these institutions got less money.

The MOE’s projected spending in Budget 2016 was RM41.36 billion, a slight increase from RM40.85 billion in the previous year.

Out of the Finance Ministry's total allocation, a whopping 66 per cent or RM21.44 billion went into transfer payments and aid, with RM10.63 billion of the latter amount going directly to subsidies and cash assistance.

The nature of the subsidies and cash assistance was not specified, but the federal government has spent billions on progressively higher annual aid for lower-income households and individuals under the Bantuan Rakyat 1Malaysia (BR1M) scheme that started in 2012. 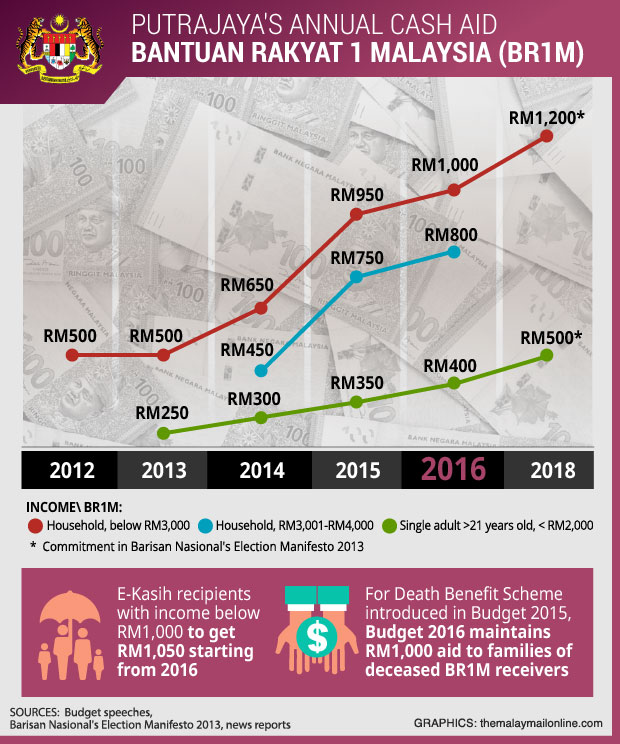 A one-off spending of RM292.2 million was allocated for the Treasury, including almost half of it or RM146 million on the MOF's National Blue Ocean Strategy and Urban Transformation Centres (UTC), RM38 million on upgrading and maintenance, RM32 million on grants to launch the Public Sector Home Financing Board (LPPSA), as well as RM30 million each on GST training and fees for consultation services respectively.

Unlike MOF’s annual allocation which has been decreasing, the MOH’s allocation has been on a general upward trend over the last few years both in amount and in proportion to the entire government budget.

Over half of the MOH’s allocation for this year or over RM12.24 billion went towards medical services, with over RM2 billion each going towards the management of hospitals and pharmacies and their supplies each.

Of the over RM4.2 billion allocated for public health, close to RM2.15 billion goes to family health development, while about a quarter or over RM1 billion is for pharmacies and public health supplies. Disease control took up RM675.6 million, while almost RM64 million was set aside for health education.

After administration, the biggest opex allocation for JPM was for the federal religious authority Islamic Development Department Malaysia (Jakim) at RM725 million, of which RM486.8 million would go towards implementing its policies.

Funds under Jakim’s policies subsection is used to enforce each state’s Shariah laws, and “control deviation of faith” that “threatens the country’s safety”, among others.

Unlike most other ministries and agencies, the bulk of JPM’s spending was actually allocated for its development expenditure: RM14.3 billion, or around 70 per cent of its total budget.

RM3 billion alone was allocated for a so-called “facilitation fund”, and another RM1.33 billion was for “people-friendly projects”.

This highest allocation for MOHA was for the Royal Malaysia Police, with RM3.19 billion out of RM7.98 billion (40 per cent) allocated on administration alone -- which included human resource management and policy implementation.

In comparison, RM678.7 million was put aside for crime investigation, and RM492.3 million on intelligence services.