Datuk Seri Gopal Sri Ram is seen leaving the Palace of Justice in Putrajaya, October 12, 2016. ― Picture by Yusof Mat Isa
Follow us on Instagram, subscribe to our Telegram channel and browser alerts for the latest news you need to know.
By By Ida Lim

PUTRAJAYA, Oct 12 ― PKR's Datuk Seri Anwar Ibrahim's conviction in the Sodomy II case should be reversed as he was allegedly a victim of injustice and a political conspiracy, his lawyer said today in court.

Gopal noted that Shafee went on a roadshow purportedly organised by Umno and in which Umno Youth chief Khairy Jamaluddin was present to speak on Anwar's case.

“Had the court known that there was compelling delight on the result of this case and that this man was going to do a roadshow, it would have supported the defence that we put forward, which was a pre-arranged plan to hoist a false case against him,” he told the Federal Court.

He was asked how Shafee's conduct after the appeal hearing could be linked back or said to have influenced the Federal Court's decision.

Gopal later pointed out that the roadshow was organised by a political party and that the fact it happened after the Federal Court's decision was allegedly pre-planned.

“The fact that it came after is only because they planned it after that...The fact that you show your hand after the game doesn't mean that you won it fairly,” he said, using the analogy of a card game.

At one point, Gopal said the Umno-linked roadshow after the Federal Court's conviction decision allegedly showed Shafee to be a “puppet” and also revealed the “puppet-master”.

He said that he had never in his 50 years of legal practice seen a public prosecutor from the Attorney-General's Chambers go on such roadshows.

“It has never happened and it will never happen because they are professionals, but what happened here was as if the prosecutor was dancing on the grave,” he said.

The Attorney-General's Chambers' Datuk Ahmad Kamal Md Shahid, who represented the prosecution, said however that Gopal had failed to show how Shafee's conduct had influenced the Federal Court's decision.

“They are making mere allegations,” the head of the Attorney-General's Chambers trial and appellate unit said.

He noted that the Attorney-General's authorisation for Shafee as a private lawyer to act for the prosecution ended when the Federal Court hearing last year was concluded, and the AG would have no control after that over Shafee's actions.

“The public prosecutor has no control on his conduct the moment the fiat ends. The so-called alleged conduct of the DPP after trial had no bearing on the outcome of this court,” he said.

As for the various points such as gaps in evidence that Gopal had raised to back the claim of injustice to Anwar during the Federal Court hearing, Ahmad Kamal said these were only relevant if raised during the appeal stages and not during a review application at the Federal Court.

Citing a 2008 judgment in the court case between Asean Security Paper Mills Sdn Bhd and Mitsui Sumitomo Insurance (Malaysia) Berhad, Ahmad Kamal also said that there must be a “finality” in court decisions and it must be held that the Federal Court was right at arriving in its decisions.

“Even if they had wrongly applied the facts of the case, wrongly interpreted points of law, it's not for courts to come to the conclusion that the court was wrong,” he said.

Today is the hearing of Anwar's application for the Federal Court to review its decision last year to convict and sentence him to five years in jail for sodomy.

Chief Judge of the High Court of Malaya Tan Sri Zulkefli Ahmad Makinudin, who chaired the five-man panel today, said the Federal Court will deliver its decision on a date to be fixed.

On February 10, 2015, the Federal Court upheld an earlier ruling for the conviction and five-year jail term of Anwar over the sodomy of his former political aide Mohd Saiful Bukhari Azlan in 2008. 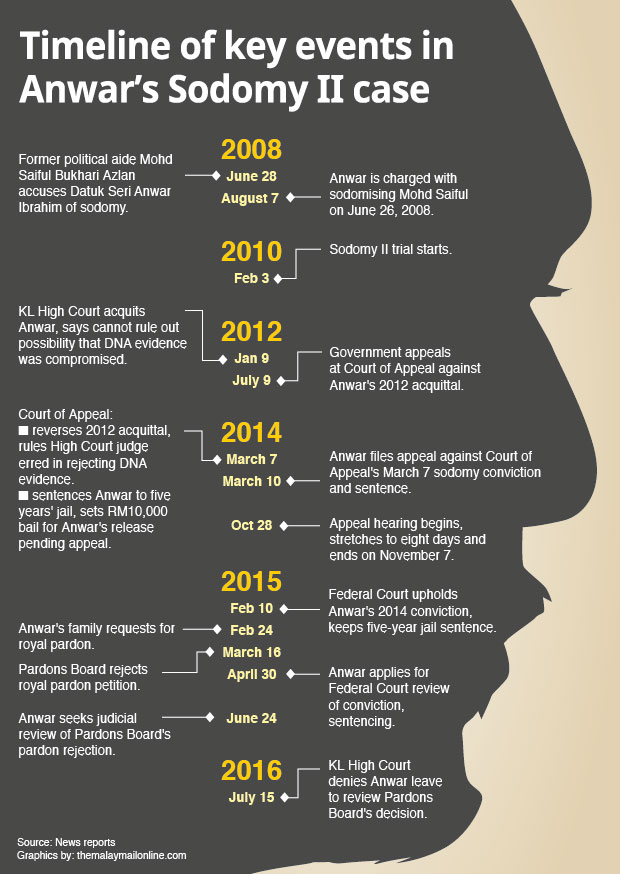