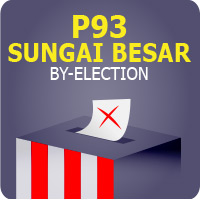 The PKR deputy president has raised eyebrows with his absence from the campaign trail for his party’s political ally since nomination day on June 5.

But Azmin said he was busy with his official duty to accompany the Selangor sultan, who is also the head of Islam in the state, in the monarch’s public appearances during the Muslim fasting month of Ramadan.

“As the mentri besar, it is my responsibility to follow the sultan to be with the people in Selangor.

“Last night during an event with His Highness at the Jeram mosque, I whispered to him if I can be allowed to come here tonight. He agreed to me coming to Sungai Besar,” Azmin explained during the breaking of fast at Kampung Hala Cara Baru here this evening.

He hit back at detractors from Umno who he claimed to have a fuss over his past absence, calling it a low-blow.

“This is Umno’s mentality. I don’t need to be here just because it’s the by-election. That is the Umno way. The Selangor government has always been helping the people of Sungai Besar,” Azmin said.

Rumours had circulated after Azmin’s absence on nomination day that the PKR Number Two was withdrawing from the campaign after failing to negotiate a deal with PAS to secure a straight fight between the federal opposition and the ruling Barisan Nasional (BN).

Dr Rani played down his participation at the same function where his rival contender for Sungai Besar was also present, saying he had done the same earlier today at another event featuring BN candidate Budiman Mohd Zohdi.

“Today morning I was with Budiman and this evening I’m here,” the Meru assemblyman said, adding that he was also present out of respect for Azmin as Selangor MB.

Dr Rani said he was not worried of any repercussion from his party for sharing a meal with his political rivals.

“No, no, no. There is no problem in this, nothing will happen,” he said.

Based on the Election Commission’s (EC) statistics, the Sungai Besar federal constituency has 42,836 voters comprising 22,227 Malays votes, 13,142 Chinese, and 820 Indians with 98 from other races.