Women should not be leaders, says Kuala Kangsar independent 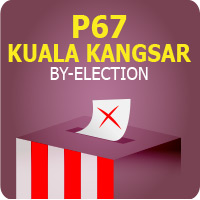 “I don’t believe in women (leaders) because men lead women. If they (women) are not qualified to lead a family, how can they lead something larger?” he told reporters after submitting nomination papers here this morning.

“I have never agreed to women being leaders from the beginning. I feel men should be leaders and I don’t believe in political parties because they are all ‘cari makan’ (looking to serve themselves). Parties only push people further apart,” he added.

When asked if his sentiments against women could be construed as sexist, Izat said: “I don’t think about this (viewpoint)”.

Izat said he previously contested but lost in three elections as an independent, including twice in Pengkalan Kubor, Kelantan, in 2013 and 2014, as well as the Chempaka seat in the same state in 2015.

Contesting under the symbol of a pen in Kuala Kangsar, Izat is a former Universiti Teknologi Mara (UiTM) Seri Iskandar lecturer who taught architecture, interior decoration, and art and design.

Despite being a Kelantan native, Izat claimed that he was familiar with Perak as he had previously been employed in Seri Iskandar for 10 years.

He also claimed that his wife is a Kuala Kangsar local.

Asked about the presence of the other male candidate — Parti Amanah Negara’s (Amanah) Dr Ahmad Termizi Ramli — Izat said he preferred to concentrate on his own advantages instead of looking at others.

“Termizi has his strengths and I have mine. But I believe in myself more than I believe in anyone else,” he said.

“At the moment, I want to continue things the way they are in Kuala Kangsar and keep them on the right track. The main point is to do what God tells us to and avoid things that are forbidden,” he said.

Izat also railed against Mastura’s candidacy, saying that she should not have been burdened by it during the mourning period for her husband, the late Kuala Kangsar MP Datuk Wan Mohammad Khair-il Anuar Wan Ahmad.

He said another person should have been given the chance to contest in her place.

CORRECTION: A previous version of this story carried a photograph of the Amanah candidate Dr Ahmad Termizi Ramli wrongly captioned as Izat Bukhary Ismail Bukhary. It has since been replaced.