Hadi touts Islam as answer to all mankind’s problems 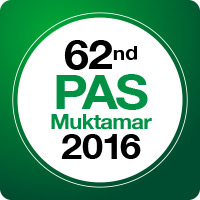 He said Malaysians continue to put their faith in the democratic ideology inherited from the colonial British rulers, claiming there to be evidence pointing to its failure.

“We see today the failure of all man-made ideologies to solve the problems facing humanity… but this government has continued to uphold a legacy left by the colonialists.

“And it continues to defend a foreign ideology.

“They are ignorant and unaware that there are Islamic solutions to all problems,” he said in his policy speech.

Hadi added that the country’s “reverence” for man-made ideologies like democracy have resulted in the absolute moral corruption of elected leaders, as seen in some of the corruption scandals engulfing the present administration.

Hadi did not elaborate on what he meant by “Islamic solutions” in his speech, but last week, he was given the greenlight to table his private member’s Bill in Parliament to strengthen the Shariah Courts’ punitive powers in accordance with Islamic laws.

PAS has been fighting to implement Islamic penal laws for the past 20 years.

He also claimed the idea of democracy was stolen from Islam.

“It must be pointed out that the West who plagiarised Islam and took the idea of democracy by separating the genuine aspects of aqidah (faith), syariat (laws) and akhlak (discipline).

“Thus it became a political system that is imperfect because it was amended far from the original concept born from Islam,” he said.

“As the solution, PAS will now focus on instilling Islamic values among the society through ‘the development of the soul’. This means PAS will return to its traditional role of spreading Islamic teachings through dakwah, he said.

“This is the hardest task for us… who took the path of tarbiyah (schooling), dakwah (evangelism) and siyasah in our work.

“We want to manage this country with all the states and its multiracial society all according to our understanding of the Quran and as-Sunnah (the ways of the prophet),” he added.

Hadi’s policy speech will be debated by delegates throughout today.