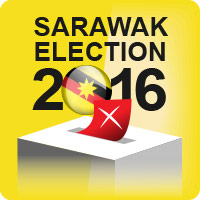 On paper, PKR successfully defended Ba’kelalan, Batu Lintang and Krian, but this still represented a 7.5 per cent success rate from the 40 seats contested. Partner DAP fared worse, losing six of the 12 seats it won in 2011, but was able to win Tanjong Batu for a final tally of seven.

Prime Minister Datuk Seri Najib Razak, who is BN chairman, attributed the result to an “urban swing” towards his coalition, an oblique reference to the return of Chinese support to his coalition.

The results were especially confounding as surveys going into the election put the Chinese community firmly in the opposition camp, although Sarawak Chief Minister Tan Sri Adenan Satem said this week there was a change in the air.

“One major concern is that as an urban-based party, the DAP will remain a minority and opposition party, given the country’s demographics and the electoral gerrymandering,” Centre for Policy Initiatives director Lim Teck Ghee told Malay Mail Online.

“The other is that despite some success in winning non-Chinese support and attracting leaders from the Bumiputera community, the party remains one with predominantly Chinese leaders and representatives in Parliament and at the state level.”

After 2013, DAP began outreach campaigns in Sabah and Sarawak to broaden the party’s appeal beyond the towns and cities thought to be firmly in hand, but yesterday’s outcome will raise serious questions about the efficacy of the programme.

Sarawak DAP chairman Chong Chien Jen insisted, however, that the efforts will not be stopped to stem his party’s losses in urban areas.

Pakatan Harapan had also gone into the election at a disadvantage due to the massive popularity of Adenan, which BN had strategically milked before and during campaigning with its “Team Adenan” motto.

Accustomed to negative campaigning, however, the opposition parties had little to attack Adenan over save the entry bans he slapped on their leaders, but even this appeared to have little effect. Adenan plied his personal popularity when canvassing Chinese areas, urging voters to support his partners such as the SUPP, even if they did not like them, saying a vote for BN was a vote for him. It worked; SUPP president Datuk Dr Sim Kui Hian defeated the DAP candidate in Batu Kawah with over 2,000 votes to spare.

PKR and DAP also did themselves no favours by clashing in six seats, which allowed BN to romp home easily in those. The embarrassing overlaps also raised concern over the two parties’ ability to co-operate.

Merdeka Center director Ibrahim Suffian said that while the friendly fire contributed to the results, it was not the only failing with the opposition pact.

Ibrahim explained that inadequate pre-election legwork due to the remoteness of some areas, along with sections of voters who were staunch supporters of the ruling coalition, meant PKR and DAP was always battling the odds.

“Many are low income and while they may be sympathetic to the opposition, they often end up voting BN because they know BN is better able to provide for their infrastructure and economic needs,” he explained.

Elsewhere, BN won massively in the 11 new seats created during the redelineation exercise last year, giving weight to complaints of gerrymandering by opponents of the move.

While painful, Pakatan Harapan can at least take heart in knowing the bruising results of yesterday’s elections will likely be limited to Sarawak, where national issues such as the Goods and Services Tax (GST) and Putrajaya’s controversies lacked traction.

“It does indicate, however, the importance of Sarawak in the overall national political calculus. And that BN will likely continue to keep this safe deposit state albeit at a much higher price,” Ibrahim said.

BN yesterday won 72 seats to give it an unassailable supermajority in the state legislative assembly. The number of seats won by the coalition surpassed the size of the Sarawak legislature before the redelineation.

DAP ended the contest with seven seats while PKR took three. No other parties won.