KUALA LUMPUR, Jan 1 — While we are celebrating the new year, let us pause to take stock of how Malaysians appear to have been increasingly pitted against laws — those that are enforced, those that are ruled on, those that are created — meant to help keep the peace.

1. The triple whammy of laws for more power and less rights

Malaysians were taken by surprise and slapped rudely with a law where the government — backed by the full force of the state — will have Emergency-like or warzone-like powers against its citizens.

This law is aimed at securing a hazily-defined “national security” for the good of Malaysians, especially when there is a threat in an area that can be unilaterally declared a “security area” by the prime minister on the advice of the National Security Council.

For those living in a security area where curfew can be imposed, government personnel can also arrest anyone without warrants.

They can also conduct searches and seizures without warrant, take over and demolish private property and order a person to leave the area.

And this lasts for a maximum of six months. Or possibly indefinitely, according to the decree of the government, who cannot be challenged in court at all if they carried out their duties in “good faith.”

The court can also set aside inquests to review the cause of death of a person who died in a security area as a result of operations by security forces.

This new anti-terror Act is on top of the three-year-old Security Offences (Special Measures) Act, the expansion of the Prevention of Crime Act’s scope to cover terrorists and other legal provisions that are meant to counter terrorism.

It is almost a case of the return of the undead as the Act has startling similarities to the now-abolished Internal Security Act 1960, except that a suspect can be detained without trial up to 60 days initially and up to a further two years instead of indefinitely, and that a Prevention of Terrorism Board instead of the Home Minister will decide on your fate, based on the investigation of an inquiry officer who may seek evidence without following the usual laws.

And as a result of an inquiry where a lawyer cannot be present to defend you, the board can decide to give you a maximum two-year detention order or a maximum five-year restricted residence order — orders which may be renewed.

The law specifically says the courts have no power at all to review the board’s decisions, except when procedures governing such decisions are breached.

Can laws ever be a magic bullet to all our problems and can creating more laws put an end to terrorism, or would we be better served through education and the inculcation of the right values?

* Amendments to strengthen the Sedition Act 1948

In public forums nowadays, a common joke by speakers all too aware of the price of speaking their minds goes like this: “You are free to speak, but you may not be free after you speak.”

For a crime where your intention is irrelevant and where virtually anything you say can be seditious, judges will no longer have the option of fining you but must sentence you to between three to seven years in jail.

If someone damages property or hurts others because they were “incited” by what you say, you get three to 20 years in jail, regardless of whether you are a minor or a first-time offender.

Perhaps to avert past embarrassments of those facing sedition trials running away from the country, judges will also have to grant requests to seize passports of a person who has yet to be found guilty. Apart from being made to remove online seditious remarks, you can also be ordered not to touch any electronic device. 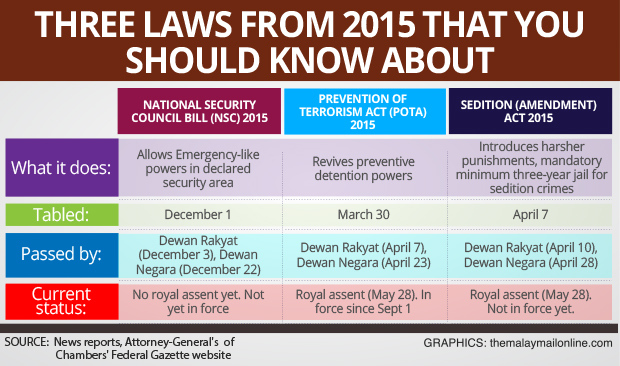 If you see a pattern here, it could be this: The granting of greater powers to the government with greater potential of abuse and the stripping away of protection of freedoms for Malaysian citizens. And even the judges can’t help you or exercise their discretion in many instances, because the laws passed by Parliament say they have no powers to do so.

Are these laws that were passed with frightening efficiency that bad? Putrajaya has insisted that it needs the laws to adequately and swiftly protect Malaysians from legitimate threats and dangers, such as the Islamic State (IS) terrorists who have already enticed some locals away to join in their “war.”

2. Stifling dissent or enforcing the peace?

2015 has been yet another year where civil society has criticised the authorities for alleged selective action and prosecution, with March alone easily winning the title of Month of Arrests in terms of numbers and high-profile nabbings — including over 80 protesters of the Goods and Services Tax (GST) on March 23.

Among others, the overnight detention of PKR leader Nurul Izzah Anwar over an allegedly seditious Parliamentary speech (March 16), the arrests of five individuals from the media industry over a The Malaysian Insider report (March 30), the March 27 arrest of activist Hishamuddin Rais by plainclothes policemen ahead of a rally, the midnight and pre-dawn arrests of Opposition politicians Mohamad Sabu and Khalid Samad by 20 policemen and police in a convoy of five cars respectively drew the eyebrows of many.

The Sedition Act continued to be widely used last year with 14 individuals prosecuted and at least 38 reportedly investigated, exceeding the reported 12 prosecutions and 24 investigations under the same law in 2014, while an offence under the Communications and Multimedia Act against the online posting of remarks that are offensive or would hurt the feelings of others was used to probe or charge more than 10 people last year.

3. The courts that uphold the Federal Constitution

In 2015, we see the Federal Court saying in publisher Ezra Zaid’s case that a Selangor Islamic law restricting the constitutional freedom of speech remains valid because of Islam’s position and the alleged offence’s link to Islamic precepts (September 28), telling Universiti Malaya law lecturer Azmi Sharom that the pre-Merdeka Sedition Act is Constitutional as it does not fully restrict the right to freedom of speech (October 6), setting aside a lower court’s order that struck out a Negri Sembilan Shariah law against cross-dressing, simply because the three transgenders had not directly approached the Federal Court for their Constitutional challenge in the first place (October 8).

The Federal Court also dismissed three Gerakan members’ Constitutional challenge against Kelantan’s hudud law effectively because none of them had stated they were Muslims to show they would be affected by the Islamic penal code (October 20), while the Court of Appeal reportedly took the unusual route of disregarding an earlier decision by it that found it unconstitutional to criminalise rally organisers who fail to give a 10-day advance notice of an assembly (October 1).

Retired Court of Appeal judge Datuk Mohd Hishamudin Mohd Yunus describes our current situation best, with his observation that these cases show the courts’ great reluctance to strike down federal laws or state laws that are unconstitutional, while also effectively denying or making Malaysians’ fundamental liberties mere illusions by giving wide interpretations to restrict these freedoms.

“Has the judiciary forsaken its sacred role as the guardian and protector of the Federal Constitution and fundamental liberties? Can the citizens, in particular, the minorities, look to the judiciary to defend their fundamental liberties? Have our courts become meek and subservient to the Legislature and the Executive, instead of asserting their judicial power and independence in upholding the rule of law?” he said at a public lecture on December 9 when listing out the disturbing questions arising from these cases.

So where does all that has happened in the legal sphere last year leaves us?

We are at the brink of a new year, aware that the boundaries of our conduct have been drawn closer for the greater good of the country.

Perhaps we can end with a wish, that the Federal Constitution protecting all Malaysians be upheld and that the law and justice be tempered with mercy and be meted out proportionately to the threat or offence at hand.