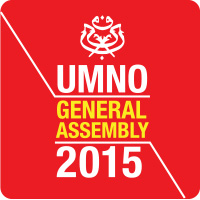 KUALA LUMPUR, Dec 10 — If Umno is rejected in the next general election, the country’s Malays and Muslims will be at the hands of a DAP-dominated federal opposition coalition that is anti-Islam and anti-Malay, Datuk Seri Najib Razak warned today.

In his policy speech at the opening of the Umno general assembly, the party president reminded delegates that when federal polls are held next, voters would have to choose between the present Umno-led Barisan Nasional (BN) pact or the newly-formed Pakatan Harapan.

“The political reality in Malaysia today is that the people only have two options — that is to choose between a coalition led by Umno or a coalition dominated by DAP.

“What I mean is if Umno is rejected, this country will be ruled by those who are against the Islamic struggle and those who reject the fight for Malays and Bumiputeras,” Najib said.

The Umno president also said he was relieved and happy that PAS was no longer with the federal opposition, and extended a hand of friendship to the Islamist party.

“With a big heart, we extend the ties of ‘ukhuwah’ in hopes that it will lead to perfection to build Malaysia based on (Islamic) principles,” Najib said.